CMJ Wednesday: A day in the life (of a crazy person) 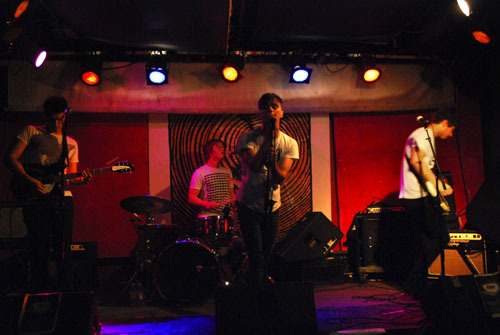 Our own Nate Dorr documents his 12 hour jaunt through every corner of the festival. Thought you were cool by going to a show during the day and during the night, right?

12:15 — Brooklyn Vegan got things started so early that it was very nearly technically morning (what is wrong with these people, don't they know there were shows the night before too?!), with a free all-afternoon party at Piano's beginning at noon. New Zealand's Cut Off Your Hands does the honors of kicking off the show to the sparse audience able to roll of out of bed in the AM. A lot of people seem to be talking about this band right now, but this may be more because of the ridiculous number of CMJ showcases they're appearing in than because of their proficient-but-somewhat-unremarkable jangly indie-pop/rock songs. They have a certain something, though, that makes me think we're gonna see them gaining popularity.

12:38 — Sometimes I think the crazier locals know when the city's got guests and wander the streets accordingly. “Damn, I left my dick in here” says the fat dude with the sack, drawing baffled looks as he passes the Piano's storefront.

12:45 — “It's the Redbull fairy!” someone shouts, and sure enough there's the truck, and there are the free cans of potent liquid. Isn't it too early for energy drinks? Perhaps, but isn't it too early for rock shows? Redbull is operating on the DL this year — CMJ is being sponsored by (gasp) a rival energy drink! “Bears!” yells a guy in a baseball cap and scraggly beard as he wanders past, “Suck a dick!” I swear it isn't always like this.

1:00 — Team Robespierre, miraculously awake and functional and recovered from the sweatfest at the Silent Barn the night before, hit the stage next. The crowd has swelled impressively, and though it's the first Robespierre show I've ever seen without crowd surfing (hey, it's still early afternoon), this doesn't stop the band members from jumping on each other, to a result of general mayhem. Later, they express surprise at the turnout; disappointment at missing the free redbull.

1:42 — Down the street, the members of Cut Off Your Hands are lounging on couches in the entry of White Rabbit, where their next show will be. How'd they end up playing four shows Wednesday alone? “A really good booking agent.”

2:01 — I show up at the Puck Building to collect both my pass, and my (soon sorted/discarded) “gift bag” consisting of ads, cd samplers, and a can of Ed Hardy Vintage Tattoo Wear Energy Drink.

2:35 — I look around for the Indaba loft, home to some kind of promised show and party, around Bowery and Houston, but its location remains inscrutable. Back at White Rabbit, Cut Off Your Hands has taken the stage. They're growing on me. Solid pop sense with well-place “ooh ooh” back-up vocals, just a little bit of punk aggression, okay, not bad. Impose writer David deLeon drinks my Ed Hardy, describes it (wincing somewhat) as “an energy drink.”

2:53 — And back at Piano's, Joan as Police Women is playing. Or Joan Wasser, the titular character of her band, is playing solo, just well-controlled voice and guitar or piano. Introducing “Eternal Flame” she talks about Slayer for a while, leading me to an incorrect conclusion that it's a Slayer cover.

3:05 — Marco Loves Mimi/Mim! Outside, we stumble on a discarded sandwich board proclaiming its prior owner's love for Mim on one side and Mimi on the other. Did he run out of ink? I have a feeling that sandwich board love letters are either adorable (in a romantic comedy) or restraining order-inducing (in real life).

3:18 — Show hopping, once again, to White Rabbit, O'Death is playing some foot stompin' tunes about lost love and doom and whatnot, straight out of the backwoods of Brooklyn.

3:35 — Bowery is inexplicably mobbed with chefs. Or maybe it's a new chef-themed CMJ band. We don't ask. We do, however find the rumored Indaba loft, tucked into the narrow space between a couple restaurant supply dealers.

Middle Distance Runner has finished, but I get a photo of them descending the steep and shadowy stairwell (“wasn't this place in Taxi Driver?”)

4:06 — I eat some dumplings and a sandwich assembled out of scallion pancakes, beef, and carrots. Yes, it's another delicious $2.50 lunch in Chinatown.

5:07 — Tragedy! I learn from another Fader party attendee that the much-anticipated St. Mark's Church show with No Age, Ecstatic Sunshine, and High Places has been canceled by the venue, probably due to concerns about just how many people were likely going to be showing up. (This was later confirmed by the posters outside the church). In the meantime, a band called Ezra Furman and the Harpoons has taken the stage, playing some kind of dubious classic rock.

5:38 — Piano's has really picked up when we get back to the Brooklyn Vegan show. Apparently, exhumed 80s rockers the Meat Puppets played an exceedingly long set (and who would say no to them?) so widescreen Baltimore psych-rock band Celebration is still setting up and sound-checking for a while. At last, backed by a pulse of dual keyboards and vaguely tribal drumming, Katrina Ford's strong, soulful voice is propelled out over the crowded audience.

6:20 — No Age must be getting popular. They lined a crowd up around the corner before their in-store at Other Music, and packed the place to capacity. Waiting to get in myself, someone passing asks “do they play African tribal music?” Nope, but they do play some very well-formed, spare post-punk. The L.A. drums/bass two-piece is excellent at manipulating the pop song format, often building tension for a couple minutes to a single, perfect chorus part that we only hear once and are left craving when it's gone. I'm trapped at the back, and only get a good

7:14 — The Blender Theatre at Gramercy is a strange space, tall and boxy, and with very unnecessary stadium seating climbing to the back wall. When I arrive for the Kill Rock Stars showcase, the hall is still mostly empty, with the cluster of people around the stage filling only a fraction of the space. Turns out the line-up got shuffled last minute, and new experimental guitar talent Marnie Stern got shoved to the opening slot. A shame, as the precision guitar shrapnel she fires out into the stands deserves to be heard. Stern spends a lot of time playing in cramped, trebly configurations on the neck of her guitar with tightly controlled finger motions, generating blistering, dissonant note cascades to balance against her voice. Apparently Zack Hill from Hella played on her album, but tonight she's backed up by Zach Lehrhoff and Matt Marlin from Pterodactyl, whose usual noise-punk stylings sound quite changed and integrated into Stern's sound tonight. She ends with an extended story-song illustrated by little fragments of guitar noise.

8:03 — Mika Miko are, along with Marnie Stern, part of a new generation of Kill Rock Stars, but these five ladies take their KRS influences right back to the source with messy, energetic riot grrl punk rock. Brisk, invigorating, and retaining a playing-around-in-Mom's-basement carelessness also projected through the adding-nothing-but-character stage banter.

8:46 — By contrast, Mary Timony, well over a decade into her career by now, is all care and control. Her songs retain a certain punk aggression in arrangement, but present it with a clarity that might sound over-sterilized if it wasn't for the fact that her voice and guitar-work really deserve to be heard clean and crisp. I love messiness, but sometimes it's good to hear the other angle as well.

9:28 — The No Age, Dan Deacon, Ponytail show at Bowery is predictably sold out and closed to passes when I roll up. As I'm about to leave, however, powerful blue-tinted light snaps on, operated, surprisingly by a friend. Some kind of filming (details vague) is going on, requiring Bowery exteriors and crowd shots. They chose a good night.

9:40 — Crossing back over the Williamsburg bridge by bike, I manage to catch the last couple songs of the Yeasayer set at the new Music Hall of Williamsburg. I'd been somewhat lukewarm about the spacey mid-tempo rock band in the past, but as I bask in the synth wooshes, handclaps, tumbling drums, and sense of undefined drama of “Sunrise” I feel myself being won over little by little.

10:07 — Next door, at Galapagos, the Insound party is moving forward with Titus Andronicus, with alternately folk- and punk-informed rock songs and a hyperkinetic lead singer who proves difficult to photograph due to never holding still, whether jumping into the audience or climbing the speaker tower.

11:02 — Union Pool is scheduled for a Moon + Moon show, but running late, so I catch a little bit of Lewis and Clarke, then back to Galapagos to stand mesmerized by the blinking projections of Baltimore's Videohippos for a time. There is a bit of a levels problem between backing loops and vocals, but this is soon straightened out, clearing a path for hazy melodies serving as fitting accompaniment to the on-screen video collage.

11:43 — Back across the river into Manhattan, newly formed electro outfit the Black Ghosts, composed of the DJ from Wiseguys (remember them?) and the singer from Simian Mobile Disco are DJing at the Delancey. But they're singing over the DJed beats. And the tracks they're spinning are consistently solid breaks and electro, but rarely recognizable, aside from some kind of heavy breakbeat-infused reworking of Justice's “Phantom”. Their own remix, perhaps? Either way, a formidable set, and I don't even like straight-up DJ sets all that often.

12:39 — And then back to Union Pool for the Moon + Moon set at last. I'll leave that to someone else who caught the entire set to discuss, but it was compelling stuff.

1:33 — A Place to Bury Strangers impressed me, both sonically and visually, last time I saw them at Mercury Lounge. Tonight though, is somehow strikingly better. The band opens with what sounds like a new song (though certainly consistent with the gnashing shoegaze fury that is their trademark) and a projected, ever shifting-grid that covers the entire stage and all three members. As the grid moves and changes so does the band, becoming little more than abstract geometric shapes one moment, illuminated the next, and then turning to hazy silhouettes a moment later. This continues through several favorites, including “To Fix a Gash in Your Head” as intensity builds, finally erupting into semi-blinding strobes that reveal the band at last. The audience stands mesmerized (well, besides the two guys asleep back in the bar) as a Place to Bury Strangers blast in and out of dissonant feedback and roaring melodies, crashing guitars down on the stage in a resounding din, over the next… well… it's hard to say, it could be ten minutes, or twenty, or more, time just seems to be holding its breath for them the whole time. And then it's over, silence sweeps back in, and I have long ride back home and a long night of assembling these stories and images.