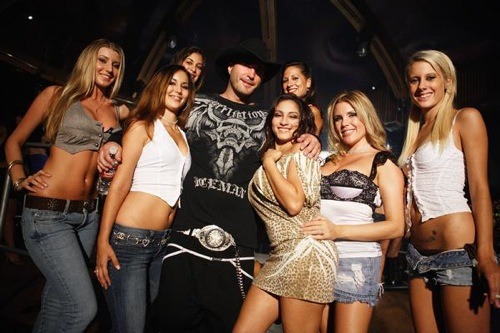 Just drape a Texas flag over a white stripper's boobs, and bingo.

There has been a void in my life since Cowboy Troy's latest album, Black in the Saddle hit the streets. How and where can I hear more Hick Hop? What, what's this?

If you like the edge of Kid Rock, Uncle Cracker (sic) and Outlaw Country the 'Country Rap King' is taking it to the next level…

More edge than Uncle Kracker? By that do they mean he actually does jail time after brutally raping his women? He must truly be the country rap king!

But let's be fair here; “Saddle Up Shawty” is the best local steakhouse commercial I've ever seen. The video, directed by—you guessed it—Mikel Knight, aims for an accurate depiction of Texas, right down to the straight-out-of-Deadwood whore who haunts the bar customers. Really though, as a native Texan I can honestly say that this is actually kind of like Texas. In Texas the guys dress like douches, girls really are generally that attractive, and all the bars kind of go for that western look even though there's a Quizno's next door.

But why do we as a people look at this and laugh? Why do we automatically dismiss any possibility of talent when we see the words “country” and “rap” put next to each other (literally)? The thing that makes music like this so laughable isn't the fact that the artists are combining two radically different genres of music. In fact, both country and rap have many cultural similarities: both care too much about their cars, blatantly hate women, and both use the “N” word repeatedly. ZING!

The problem with the Cowboy Troys and the Mikel Knights of this world is that they never met a cliche they didn't like. So you like country? Have your video take place in a Texas-themed bar while wearing a cowboy hat, dance with white girls wearing the Texas flag on their boobs and yell “Yeeehawww” throughout. Oh, but you need to incorporate some rap shit? Have those white girls be on stripper poles, compare those same women to chickens and call them “Shawty”, and tell everyone you're an “Urban Cowboy”. Anyone with Google, a piece of paper with the terms “rap music” and “country music” written on it and ten minutes could have directed this video.

When you take music at face value as hard as Mikel Knight seems to it just makes you look so insincere that it's difficult for anyone to imagine that any real thought is put into your songs. Lou Dobbs could look at “Shawty Saddle Up” for fifteen seconds and say, “Oh, it's a cross between rap and country”. Music driven by anything other than branding would naturally be harder to categorize, and in our case, make fun of. But this is easy. It's like a hick hop minstrel show that indiscriminately degrades both rap and country.

But Mikel Knight loves country and rap equally. He must have always been like this, right? Wait, what's this that I found on YouTube from 2002?

Oh dear God, I just blew the lid off this guy's game! Mikel Knight was a fucking rapping-ass rapper in 2002! Braids and cornrows, jerseys, diamonds on wood. It's almost as if he actually knows something about the culture. So maybe it's like he should know better than to whore himself out to go pop, because there are plenty of rappers whoring themselves out today by just going rap. You have options, dude! But then again, he did make a record called “Peckawood”, so he is used to playing the clown.

And by the way, it's totally possible to cross rap and country music and still maintain your credibility and artistic integrity while not insulting your audience. Right?