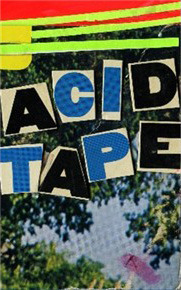 It has been quite a while since my last column, so let me apologize in advance if this is old news to you heads. Trying to work my way out of this creative rut means I gotta first give time to some of my favorite tapes from this year before moving on to shiny new releases. The Psychedelic Horseshit gem “Acid Tape” definitely has to be the first.

Many fans of different genres, from lo-fi garage rock, to burnt out psych chillers and experimental music manipulation, and often to everything in between, can usually find a reason to like Psychedelic Horseshit. They are one of many bands from the fine Columbus scene. They're unpredictable, put on raucous live shows, and Matt Whitehurst’s ranting can range from hypocritically head-scratching to hilarious. Even our own Blake Gillespie pumped up the hype on this release before it was out. Again, a little something for all. So without further ado, here we go:

This latest tape regurgitation again blurs those lines of shoegaze and blown out psychedelic abandon only definable as shitgaze, but in ways pushes boundaries more and alienates any listeners who don’t want to explore out their sounds. The tape starts with some decidedly chilled subtly, pushing off with relaxed break beats and slow building ambience. “Modern Daze”, where the tape moves from here, is an apropos titling for the highlight track of this side, as it encompasses modern psychedelic loop “pop” with Whitehurst’s stoned out nonchalance. He somehow gives off the impression that he is turning knobs and hitting buttons without any kind of real plan, yet expertly crafts something that is equal parts Noah Lennox pop loops, James Ferraro sound collage, and glitchy backbeat dub.

Speaking of dub, the second side shows the band delving into the genre in a downright traditionalist tone, reminiscent of Scratch Perry’s or Mad Professor’s more outer space moments with a thick slice of shitgaze murkiness. The other tracks are what could be described as drunkenly awesome slop chord blues and a possible mimicry of the lo-fi stylings that Whitehurst loves to hate. It ends with “Bleak Vacations”, the label's assertion of “Sister Ray” type improv abandon. Though nothing can really kick you in the teeth the way “Sister Ray” can, it draws from the bands communal jam spirit via its live shows, matching chops and reckless psychedelics in a similar vein to Columbus contemporaries EJDM (with less high-hats) or Bay Area standouts Thee Oh Sees (without the hooks).

Overall, this is easily one of, if not my favorite thing from this year. AND HEY! THERE ARE LESS THAN 10 COPIES AVAILABLE FROM THE LABEL FOR FOUR FREAKING DOLLARS!

I’d post a download, but we should help out and make sure this great tape gets sold out before we start passing it around.

Buy it from Fan Death Records.