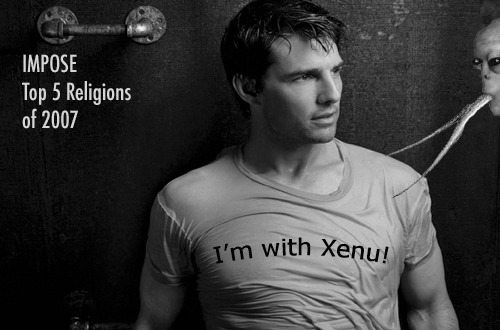 05 Catholicism
Despite many failings in recent years, several scandals and a Pope who looks like Emperor Palpatine, Catholicism manages to eke its way into a spot on this year's Top Five merely by not being Born-Again Christianity. We also commend Catholicism for giving up on popular music sometime in the 18th century (with a brief, regrettable resurgence in the mid-90s with Chant), something which other sects ought to consider emulating. The stole-and-vestment look is also coming back in a big way, though mass still lacks a certain flash.

Recommendations for the upcoming year: backup dancers, pews that recline, coke machine in the vestry.

04 Judaism
This 3,000-year-old religion moves up a spot from last year, glacially progressing at the rate that the public forgets about Adam Sandler. Getting 50 Cent to play a bat mitzvah was also a step in the right direction; keep heading down that road and soon the Hora will be bigger than the Tootsie Roll.

Recommendations: invite more goyim to some of those sexy parties, change the name “Hanukkah” so it doesn't rhyme with anything.

03 Scientology
Take fading celebrities, pulp science fiction and Free Stress Tests, mix them in Isaac Hayes' discarded chef's hat with a dash of paranoia and a hint of transubstantiation, and you've got this year's third best organized religion. After what seemed like a PR nightmare last year, the continuing adventures of Tom, Katie and Suri have actually boosted Scientology's ratings in a big way in the latter half of '07. See, the general public needs a religion for the completely batshit insane that isn't quite going all Hale-Bopp.

02 Pastafarianism
For the third year running, the Church of the Flying Spaghetti Monster holds its place among the top organized religions of the year, still being the only one founded on direct, verifiable proof. This young religion drops down to number two from last year due to waning novelty, lackluster t-shirt sales and recent adoption by scores of hipsters. However, while verifiably uncool cats like Richard Dawkins continue to make atheism less and less of an alternative for the fashion-conscious, Pastafarians can rest assured their faith will continue to rank high among the post-ironic. Now if only they can build a Pastafarian Natural History Museum, to finally set the record straight about the FSM with huge, robotic dioramas.

Recommendations: insert self into the pledge of allegiance, kill Jesus.

01 Buddhism
While Buddhism has always had a strong showing in year-end reports thanks to its chill, relaxed attitude and bitchin' robes, this year's actions in Myanmar have secured it a spot at the top of the charts. Opposing a military junta with nothing more than a bunch of marching monks? That takes some serious balls, and we're not just talking about prayer beads. And while we do wonder why one would bother with opposing anything if everything in this life is an illusion, we're all for sticking it to the man.

Recommendations: the Dalai Lama really rocks those thin-rimmed specs; has he ever considered Aviators?