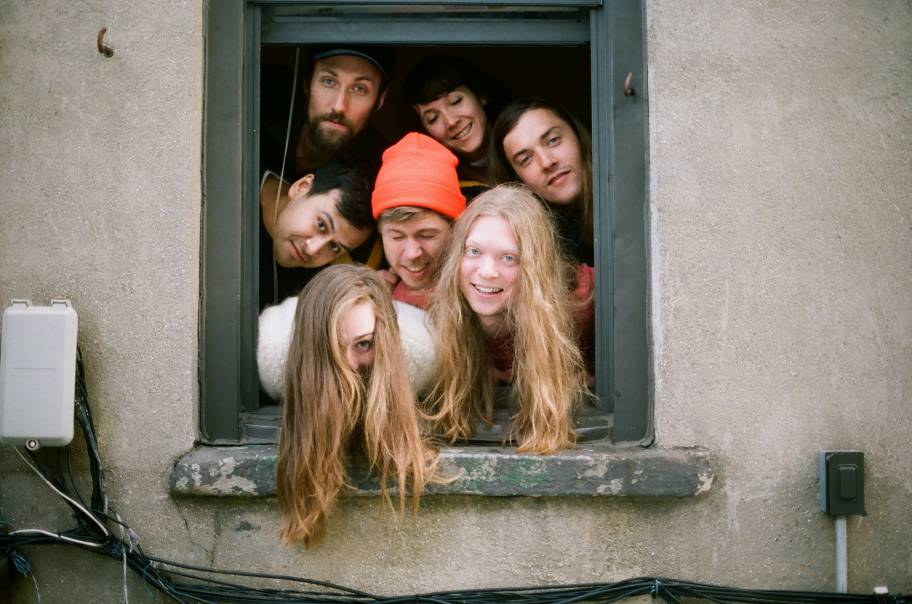 From the choral pastures of the past and the smooth prog. undercurrent obsessions of today’s aesthetes; the gifts & shifts of the autumn season provide a harvest of some of the year’s most anticipated sounds & left field arrivals. From Provo, Utah; meet Adam Klopp of Choir Boy who has created a remarkable debut album titled Passive With Desire, available October 28 from the esteemed tastes over at Team Love Records. Having put in actual work as a legit choir boy in his youth, even attending Brigham Young University before moving on from the Mormon church; Klopp’s music attends to a variety of disciplines where science fiction fascinations permeate compositions that allude to DIY synth-pop futurism with clever demonstrations of soft radio pop knowledge ready to ride & sail the friendly seas. Presenting the world premiere for Choir Boy’s “I Feel How The Snow Falls”, the concentrations of feelings, complicated emotions & nostalgic stream of sentiments all together create the feeling of winter time and everything else surrounding both the cold & the warmth experienced during that season.

“I Feel How the Snow Falls” opens up with backwards playback & sampled home movies that cast illuminations on memories of years & holidays past. The pitter-patter of snow fall is illustrated in the intimate arrangement of synths & emotive rhythms that bring about elements of cabin fever & stir-crazy sounds of youthful rambunctiousness. Family time spent together around the Christmas season can be heard on the sampled home video audio where shouts of excitement & the thrill of opening presents are complimented with selective sequences of keys. The instrumentation progressions of chords & synthesized notes underscore a view to Adam’s own most cherished December holiday memories. The bookending samples of nostalgia provide a warm foundation of reflective observations that ruminates over the feels of xmas anticipation over gifts combined with the icy elements that encase & crystallize these earnest expressions in the glaciers of memory. Join us following the debut listen to “I Feel How the Snow Falls” for a candid conversation with Choir Boy’s own Adam Klopp.

Interested in hearing about how your upbringing in Polvo, Utah impacted your creative & musical perspectives.

I actually grew up in Cleveland, Ohio. Not sure how much the city impacted me creatively as a young kid, but I was definitely impacted by my parents and the focus on music in my family. We sang a lot at church. I think my whole family sang in the church choir for most of my childhood and my siblings and I were always encouraged / coerced into performing in school choirs, school plays, show choir etc. I don’t think I’ve ever held a particular fondness for choir music/ singing in choirs, but that is definitely the first context in which I realized, Hey it can be cool and fulfilling to make noises in a group of people. We create this shape of sound together and it is a song! In retrospect, I wonder how much my exposure to that type of music has determined my melodic tendencies and vocal delivery. I think I use certain types of note patterns that could in somehow [be] distantly derivative of church hymns. Not really what I’m going for, but I think that makes sense.

Once I was in middle school, my friends and I started playing in punk bands and going to shows. I think this was probably an equally impactful [sic] era of my youth because I learned about DIY punk and the political and community side of playing music. When I was 13, I went to a DIY music festival at this old historic school house in Ohio and I got to see all these great bands doing all sorts of things I had never seen. There were lots of touring bands and I think most of the admission money went to a charity of some sort. It all seems pretty standard to me now, but at the time it was very mind blowing. I think this particular event helped me to understand the significance of creativity outside the context of capitalism. Lots of new and cool ideas and creations come from brains that aren’t pandering to a consumer! Having said this, I should remark that I do sell my music, the things I make and I’m not opposed to creative people making livings from what that they do. Obviously we exist within capitalism and unfortunately we have to make compromises and participate to survive. There is a difference between creating a thing that you want to create and then selling that thing for sustainability and creating a thing for the sake of consumption. Sorry if I went off on a bit of a tangent.

Tell us about how the jump from being a real choir boy back in the days of church to the inevitable formation of Choir Boy happened.

As I mentioned before, I started playing in a band in middle school and kept doing music on my own and in various bands through out high school and college up until now.

Would you consider your moniker to be something of a subtle rebellion against your Mormon roots?

No! Not really. I used to be Mormon and have written about certain experiences with that in my songs, but I’m not trying to be antagonistic or rebellious or mocking. It’s more of an acknowledgement of how the things I’ve experienced have formed who I am. At one point in high school, this kid I knew wrote about one of my shows on his blog and called me a choir boy, or something. I don’t recall the exact quote in context, but I think it was a rude and accurate internet roast of my vocal style. Anyhow, the idea of using the name as a title/moniker has lingered in my head for a while. It feels like a comical reflection on my personal experiences. The moniker is saying, All of my life has determined my current form of me. So while there are definitely ideas and lyrics in these songs that are informed by my religious experiences, it is definitely supposed to be broader discussion of memories and emotions etc.

How did Passive With Desire first begin in sketch/demo form?

I started demoing the songs in my bedroom about a year ago. I wanted to be as self dependent as possible with production and arrangement with this album. Making the demos helped me learn how to piece everything together. They were initially supposed to just be templates for the album but I got pretty attached to some of the shitty guitar and keyboard sounds so a lot demo fragments were integrated into the final album.

What other sorts of passive passions & wanton desires also informed this album?

Interested too in hearing how you even begin to approach creating such a serene—yet intricately arranged sound.

I planned most of the arrangements out in the demos before we started recording. Also, I write slow songs (all below 120 bpm on this album).

I hope we can all be happier and treat each other well!