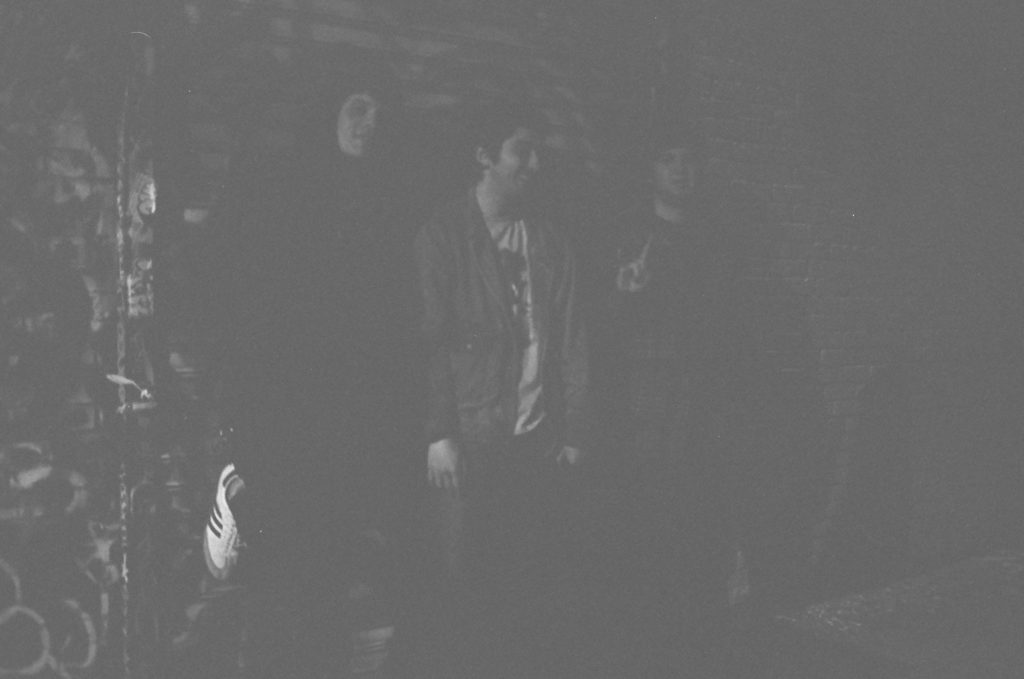 Boston-based punk trio The Channels – comprised of Nick Baker, Wes Kaplan (The Craters), and Ian Kovac (ex-Guerilla Toss) – have returned from a two year silence with a slightly different sound, and even more material to get your heart racing. Their upcoming EP, Disposable Camera, is out August 19th and we’ve got the exclusive first listen right here.

The six track EP starts with “Pill”, a mid-tempo burner with a hip hop feel to the vocals, which are intricately woven in to the instrumentals. “Symptom Vintage” has a slightly darker tone to it, frantically paced with scattered sound effects. “I Saw Myself Flat” brings more of a psychedelic feel to the EP, with its reggae-inspired percussion completely encapsulating the rest of the sound.

“Happens Everytime” wouldn’t be what it is without the whirring in the background. The song comes off as almost melancholic, with a bit of an eery feel to it. The fifth song – “Wade” – features alarming sound effects over pretty notable percussion. With the whispery vocals layered into it, this just might be our favorite track off Disposable Camera. “The Same Thing” rounds out the EP with spoken vocals reverberating off of a funky bass line. It’s almost inspiring in its diction, and we’re big fans.

We spoke briefly with Kaplan about their latest, and got some insight into the band’s personality. Check it out.

Where did the band name The Channels come from?

The three of us used to play in a band with Rory Macmurdo (Designer, Free Pizza) called The Channels. When Rory moved away we decided to start a new band with the same name. The name seems to have accommodated many different groups over the years, regardless of style or intent.

How would you describe your band?

Very much in awe of our contemporaries.

If your music was a donut, what kind of donut would it be and why?

I thought about this for awhile and decided it would be irresponsible to self diagnose. Since I don’t have health insurance, I took a quiz online. No joke we got Boston Kreme.

Who would you compare yourselves to?

Pick a band, any band.

Tell me about your latest EP, “Disposable Camera”.

It was conceived of as a simulation of our live set from tour last summer, but of course it’s never so simple. To begin with, it’s common for bands to record in stages, starting with the rhythm section and working up to vocals, which is what we did. The beauty of the studio is that whatever’s lost in fracturing the performance can be made up and then some. Luckily we had the best producer/engineer in town, Mark Fede.

Did you encounter any conflicts while creating it?

Only the the kind of conflict one should expect. Time and money were short, but there was enough to get it done the way we wanted. At the end of the day we were making it for ourselves; if there were other conflicts, it’s likely our current association would dissolve, but that’s just to say that the basis of the band resides in whatever mysterious properties enable us to slip into musical conversation and (on our best days) quickly transcend the sum of our parts. Any conflict comes from outside the band (bad weather, noise complaints etc.) and lucky for us Boston is a sunny place.

What do you want people to take away from this EP?

Best case scenario: interested parties catch some of the feeling we had while these tunes were being written – if the music is effective, it should speak for those feelings on its own. Once in a blue moon, someone hears something in it that we’re not hearing, and everyone’s ears are stretched for the better.

Who is your favorite super villain and why?

The villains I’m thinking of grow more powerful as their names are spoken.

What’s up next for you guys?

We’re getting back together with Mark at the end of August to record a new set.

“Disposable Camera” is out August 19th via Designer Medium Records.