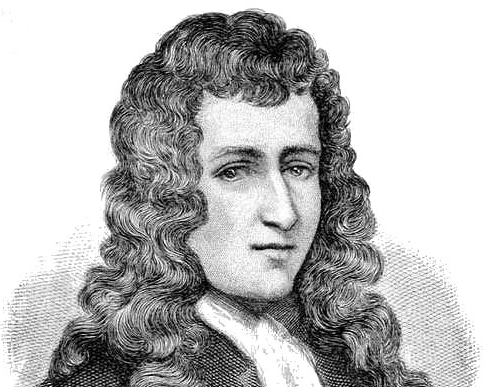 There's so much that can be said about French Explorer René-Robert Cavelier De La Salle (1643-1687). La Salle would set out on occasion from either Montreal or the Outaouais in search of the Ohio River (then known as the Belle-Rive region). It's unclear, reading from fairly sketchy primary sources, but it seems like La Salle never found the Ohio. What's more likely is that he beat Marquette and Talon to discovery of the Mississippi.

La Salle by all accounts was a liar and a nutter. He would claim knowledge of all the First Nation's languages even though he knew none, but he still somehow managed to trade illegally with the Outaouais and conspire to unite the Illinois and Miami tribes against the Iroquois. He hustled Louis XIV into funding a mission to claim Louisiana. Instead he landed in Texas where, finally, he was shot in the head by a conspiracy, his company tired of his tyrannical leadership style and “visionary” approach to exploration.

Researchers at The Université De Lavale led by Professor Donalda Fritz-Matin, psycho-historian, bears out La Salle's penchant for depression. He was lost out there in the great expanse with a real case of the valence-blues. Documents quoting La Salle's company men tell of a wastrel; saddened, dark, and moody. At times, he was silent in a tent for weeks, emerging enthusiastic to the point of hysteria. What exactly La Salle sought there at the furthest reaches of the New World (now known to us as the Midwest), history really wont say.

He sought for seeking's sake. He carried on through disease and brutal weather, conspiracy and mutiny. He hustled royalty and its proxies, sweet-talked aboriginals as much as his own company. All, it seems, for no real reason other than “seeking” itself, the ultimate process as an end in itself. Perhaps La Salle was the ultimate modern.

A school of thinking in Canada concerns itself with slowing down. You know what I mean? Concerning your self with time. Concerning yourself with trying to slow the self. Not impossible. They call themselves “Deaccelerators”. [Heide] Hatry will tell you that there is nothing wrong with a truly conservative frame of mind. Not conservative in a nutty John Birch Society or Rick Perry kind a way, but conservative in its more essential sense. “Just chill.” No great upheavals, no radical shifts.

Then how about being conservative when it comes to tempos? Nate Young's Regression Vol. 2 approaches tempo this way. Deaccelerated describes this musical approach perfectly. As technology turns our lives to a series of instants, where we've moved beyond “real time” to something even more manic, should we not aim to sloooow the tempo down, to observe, to ponder and to consider? To escape the tyranny of the instant is an ultimately political decision, more threatening to the established order. Which is why Young's music is so radical, because it is conservative in tempo. It is music that says: “Take your time.” “Stop and think for a minute, player!” “Slooww down.” “Take your time with everything, take a year to make your record. Hell, why not take two, jammer? Why not, what's the rush?”

Here's another notion that today seems thoroughly radical but truly isn't: polyrhythm and elastic tempos. My favorite bands ever, like Hound Dog's House Rockers or the Coasters, rip a backbeat. Who doesn't? JB (his stellar mid-period bands on various bootlegs live in Africa got so dissonant and insane it might as well have been Morbid Angel), took the backbeat and thoroughly flipped it by articulating the ONE…Where's that type of reinvention now? Hell, where is the urge, even? Anyone have a beat named after them other than Bo Diddley and Timberland? Where's that at? Some dudes you've met probably have skate tricks named after them, right? Anyone know a person with a beat named after them?

Or, fuck, why not let tempos increases or decrease through a tune? Why not let the parts overlap and not end at the same point? If a band lands their phrases at different times, it sounds loose, lazy even, but what if that was exactly the intention? Why is Sunny Murray not the primary source, the creative fount, for record makers, hit-makers, basement jammers everywhere? The utopic hope that Thurston Moore's “Top Ten From the Free Jazz Underground” (published in the second issue of Grand Royal Magazine in 1996, a crucial document) would somehow set a generation free did not come to pass.

But like La Salle's, doesn't a freed mind want nothing more than to explore?

And that's why I smoke cigarettes; to delineate a moment, to slow time. I want to remind myself of time. And that's why Nate Young rocks tempos slow; to take a moment, to flip the bird at the established order of the INSTANT. And that's why, when everything is said and done, you from St. Louis, MO; me from the Ottawa Valley; Homebrew from Simcoe, Ontario; and Born-Yesterday Jones from Rubber Stack, Ohio share a sense of humour. Because La Salle went out.