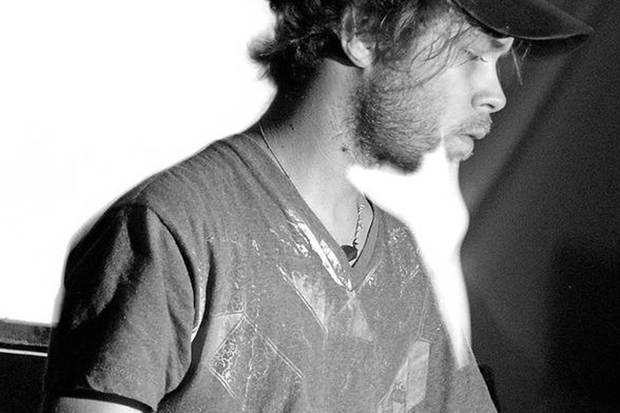 The night before the following interview took place I dreamed that David Bowie sang over one of Eric Copeland's new rhythmic mashers called “Fiesta Muerta.” “Why Bowie?” I woke up wondering. That will be left unexplained because I could easily have dreamed of ice cream cones growing legs and attacking Candy Mountain. The subconscious might have been playing a game with me. My headspace in the morning recalled a night circa 2002 when, as a student in Denton, TX, my group of friends and I caught Copeland's band Black Dice at one of the best rock dives in all the world called Rubber Gloves. I'd gone expecting eardrum bleed music, but found Black Dice to be working in toned down subtleties. Their Beaches and Canyons album had just come out, but I hadn't yet heard that record. I'd only heard the group's harsher noise workouts. The evening took me by surprise as the band crafted a world of quiet hum onstage. They totally fucked with our heads and left us with more questions than answers.

The word “experimental” is so often couple with Eric Copeland's name that one would think his birth certificate reads: Experimental Eric Copeland. Perhaps best known as a member of NYC's sound freak manipulators Black Dice, Copeland isn't one for idle hands or boring musical structures. He's also one half the duo Terrestrial Tones (with Animal Collective's Avey Tare) and has released a bucket of EPs, 7″s and full-length albums under his own name. On July 24th Underwater Peoples released his latest collection of sample sculptures titled Limbo. He's also just released a 7″ titled Flushing Meats (Calico Corp.).

The album Limbo is a trip of dense loops and layers with a heap o' psychedelic beat heavy clang on the side. Loose funk gives way to dementia then that bonker mind speeds down the highway to ecstasy, often in the space of less than a minute before grooving out to lengths of six plus. The six pieces of music on the album are fascinating so I called up Mr. Copeland to talk about his new music and to see if he could explain why I dreamed that David Bowie would be his next collaborator.

Tell me about Limbo. Any specific goals you wanted to accomplish with this record?

I feel like I made it kind of a long time ago. After the release date was pushed back* I kind of forgot about it. The record is a little less…um, it's put together a little differently than some of the other records I've done. I have a lot of feelings about it. I sat on some of the material for a long time. Some of it I played out for five years before I finally recorded. It's sort of a weird record for me because it's not like focused. It doesn't have the same sort of homogeny that some of my stuff does.

When recorded the album what was your main set up? What gear did you use?

I always use the same gear. The same stuff I use for Black Dice. It's actually nothing incredible and it's not easy to work with either. The machines don't all work together the way modern technology is designed to. If I was working with stuff that was current you could just hook it up and it would sound good, but everything of mine you have to fine tune quite a bit and then I use an old DAT machine so I can multi-track on that. I spend a lot of time multi-tracking and feeding it into a computer to make digital files.

Are your pieces a mix of sounds you've created and samples you've found and put together? How do you shape up a complete tune?

It's sort of the anything goes principle. There are some days where I don't do anything, but just listen to tapes. I feel like if you do that enough days you have to start working and that's sort of how I work. I'm always busy, but that also means relaxing and finding the sound that's needed. Most of the time the material suggests the sound. Whether it's a drum sound or a guitar solo or frequencies you have to keep in mind. Then if the frequencies are changing within in two or three notes, the changes become more subtle and they create this movement. That's where I like being with my stuff. Where it sounds like a couple different songs going at the same time.

Who are your musical influences?

I listen to music all the time. I like things that are beat driven and minimal and long. Whether it's like early hip-hop where it's a drum machine and a person on a microphone, I try to borrow the spirit that they're satisfied with a drum machine and a microphone or like a beat and a little melody. I try to throw things down that don't require a lot of change, while letting the pieces interact. I'd rather find a sound that I've never heard, even if the whole world has heard it. For me that's when I'm excited.

Do you read reviews? I've read critics think this is a more “fun” album than your previous efforts. How would you characterize it?</p>

Yeah, I feel like some of the ideas I was working on were more sort of easy. Maybe a lot of this stuff feels tighter, but I don't know. No, I don't check out reviews too often.

Did the record feel significantly different to you while you were working on it?

In some ways yeah. It shows some of the stuff I was trying out. I feel like it's the kind of a record I didn't take a lot of huge chances on personally. Maybe that's why it seems more “fun” too.

What do you have going on now? What's next for you solo and/or with Black Dice?

Flushing Meats just came out. I'm trying to work on a longer record where I can set aside this period of time to approach something keeping in mind everything I've done thus far. I'm in New York for the summer, which is pretty rare for me, so I'll use my time like that. Then things usually pop up, but I can't afford to tour by myself. Black Dice is heading to Europe in September. After that…We just turned fifteen so we're going to have a party, or a show in New York with the band Oneida because they're turning fifteen.

Last night I dreamed David Bowie sang on one of your pieces. Who would be on your list of dream collaborators?

I work a lot with pop culture. I say it somewhat facetiously, but I'd love to work with will.i.am. It would be like diving into the deep end.

*The album was originally scheduled for a June release, but was pushed back to July 24th due to a change in the label’s distribution company.