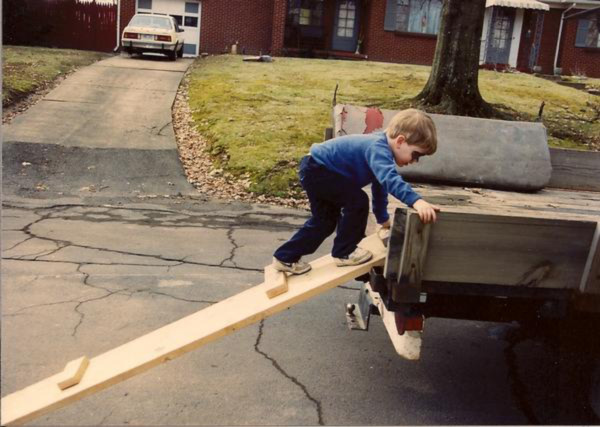 James Friley is the man behind the band Idiot Glee, which has taken the Internet by synthesized storm. His music is astral and resonant, while remaining refreshingly free of the Iron and Wine route to make-out background music. You can try three of his new songs out while you're reading this: “All Packed Up“, “It“, and “I Want the Night to Stay“.

Since this interview, Nylon Magazine used his song in some add for make-up and Vice UK did a little write-up about him, so it seems that this modest kid from Kentucky has gone international with a little help from the world wide web. It only seemed fitting then, that I talk to him via Facebook chat as he was playing his late night DJ set on Lexington College’s radio WRFL, to which you too can tune in for free on the internet.

what are you playing?

did you know that leonard cohen lives in montreal?

I capitalized way too much in that sentence, ha

I don't know really anything about him…for real?

yeah. he gets up, walks outside his door and into his own park that's literally named after him

his voice is the epitome of cool

which is cooler – lou reed's voice or leonard cohen's?

I'm only into Lou Reed a little…like only a little bit of VU (Velvet Underground) is ok for me. But I also haven't listened to more than 10 Leonard Cohen songs, so… based on that, Leonard.

why no love for the velvet underground?

Damn slow computer…No, I like them. The Nico one is freakin great all the way through, but I’ve only heard bits (of Velvet). Other than that, there are some great songs like “Cool it Down” and stuff, but when I got a few Lou Reed albums on tape…from Goodwill…. they sucked. Ha.

he definitely has his moments…

what vibe is your show tonight?

Lexington has such a supportive artist community

yeah, like everyone loves everyone else's band and always goes out to see them

and y’all are all playing them on the radio

and then they get requests

We gotta be stars in Lexington, cuz 99% of us won't leave ever

what makes Lexington so good that you’d never leave?

All the artists are treated like “stars” – we all know about each other’s art, mostly because almost everyone is friends with everyone at this point…and everyone uses each other’s art for album art, computer art, flyer art, life art, house art…like, there's little art shows for anyone basically every few months, people sell their stuff for like $15…or the real adult shows, we all go to those, too…but no one buys cuz it's like $200+.

Sometimes I wish new york were like that, but why do you say that no one will leave? it sounds like quicksand that way.

I say that because bands like The Butchers, Candy, Street Gnar, Tiny Fights, Latin Heat, etc won't tour! It's like they don't know how…or know that they should but they're insistent that they’re just doing it completely for enjoyment. Tiny Fights actually toured once…and I took them on tour in January. But I MADE them. Sort of.

Of course Hair Police, Wretched Worst, 3 Legged Race, they do tour…they're older and more serious about it…but still have tons of fun I'm sure.

Yeah, there's like a whole midwest cult that refuses to venture to the coasts

(James goes on air and rattles off the playlist.)

Oh my god that's your voice! how arresting

(He plays “Be Colony” by Broadcast and the Frocus Group)

I was – love this song – so what I was gonna say before your voice appeared on the airwaves like god from my computer speakers…people always mention blog hype with your music. you kind of blew up after a blog post, right?

what blog made your music so famous so fast?

I Guess I'm Floating (http://iguessimfloating.blogspot.com/) got the ball rolling totally out of nowhere and I didn't even realize what was going on. But then big ones came up through Said The Gramophone (http://www.saidthegramophone.com/) and Fluxblog (http://www.fluxblog.org/), which landed on MBV (http://www.mbvmusic.com/) …that landed on Prefix Mag. And then MTV Brazil…like FUCK. Then I was on XM Radio a few times, which I fantasized about as a kid…ha. Well…kid as in 17. I've kept track of everything now. It's real neat to me…makes me anxious to put stuff out. Robert (of Hair Police) is probably working on the label layout right now for the 7″ EP…weeeeeee. But that's the story. Smiles. And a lot of French people like me now, ha. I really wanna go over there.

so you just sent songs out to people?

Well, I started looking around at blogs, thinking, “Hey, I could get more reviews – this is great!” I'm getting lots of attention (kinda lame, yes) and then I sent them emails saying, “Check out my MySpace, you might dig the songs…I’ll send you mp3s.”

That's about it. I've sort of slowed down now to focus on actually releasing something! But every few days I'll message a random blogger or something 😉 like your editor, ha.

is this your first EP that you are recording?

Shit someone just requested Neon Indian…I do not like

🙂 God, this computer is slow. Robert (of Hair Police) just mastered the EP and is doing layout/maybe artwork. It’s a simple 4 songs, 12 minutes, available on 7″ and digital life. Hop Hop is releasing it…which I am starting with Ross Compton (of Tiny Fights). He approached me about doing a label, mostly 7″s and stuff. We're in it to win it…together. He's funding most of it, which is mostly why it's possible, but as far as recording goes, I’m still figuring out the live thing.

what labels would you love to work with besides one your friends own?

Labels…. hmmm…. depends on, if upon meeting them, they are nice and genuine people. Heck, maybe SUB POP?

This is dumb of me.

Oh I know – that label WOMEN is on. Jagjaguwar. I like Women…or 4AD. Because I like Ariel Pink and he just signed to them.

You just fucking blew my mind…for this reason.

Next sentence was going to be

“Whatever label Gary War is on”.

greg of gary war is one of the best front men for a band i've seen in YEARS. he used to be in with ariel pink

put some gary war or ariel pink on the radio

This is exciting. I have seen Ariel Pink live.

(He goes back on air)

(He puts Trepanated Earth on)

backing up, what do you mean when you say that you're still figuring out the live thing?

I’ve spent 5 years being in a real live loud ass rock band…with all the instruments. Now I’m doing it solo, and it's totally different. I’m trying to recreate the recordings live, although in some cases, I haven’t started recording certain songs yet because I don't know how to record what was played live first…what I’m having to realize is that what I do is pretty minimal, and it's going to probably stay that way, even more so live. I might add a percussionist/vocal harmonizer man in the future, but that’s about it.

WORDS WORDS WORDS from now on when we talk on Facebook, I will use only 10 words

what was your “loud rock band” before?

would YOU ever move from lexington?

I would do it, dunno when. Right now is the first time in my life out of school (as you found out here). Maybe I would now if the perfect opportunity of all time opened somewhere. But I’m not lookin.

this song encompasses everything we talked about tonight

You are right. Lexington is awesome.