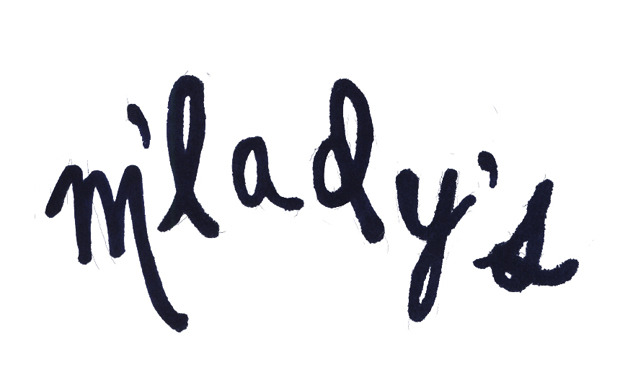 The goal of M'lady's Records is to cut through every layer of manure that surrounds the core reasons why people create and decide to make music, or write a book, or be radical at all, and to eschew all the trinkets and nonsense that go into the unnecessary fluff that this manure is tucked inside. I'm not interested in railing against the so-called music industry, but I am deeply interested in ignoring it, and instead focusing on projects that fill me with joy and help make the world seem richer and more intriguing.

The Hysterics, by Benjamin Trogdon

I was tired of seeing so many lousy ideas being paraded as innovation. Mediocrity doesn't have to be the mean average, the unknown doesn't have to be so intimidating, and money shouldn't be at the center of anyone's decisions. Now, whether or not what we do absolutely needs to exist at all is a separate discussion, but I've chosen to believe in its continued existence, since truly there may be no point to anything at all on this rock, so why not fill your life with any meaning you choose?

So our work is fairly straightforward: we issue recordings, and publish writings, and that's it. We don't own the “rights” to these works, we don't employ a bunch of people to hype them to be heard over the din of everyone else, and we don't think twice about whether they're gonna make their money back. I just can't be bothered with that stress anymore, it's for someone else's lifetime, not mine. I think that if more creative endeavor was initiated in this simple framework, you'd see a return to candor and to honesty, and maybe people would stop pursuing this obsession with regurgitating accepted cultural symbols and passing them off as truth. The idea that anyone's gonna be your salvation other than yourself makes me feel very sad. “see, there's no god making up my mind, no god giving me time”, right?

I've been very keen to publish more writing. There's also no shortage of incredible groups making music all over the world, no matter how cynical or pessimistic one might become. So we're gonna put out some more records. I'm also gonna take up carpentry this year, because I've always been afraid of it. Gonna build a house before too much longer, somewhere, probably not far from where I live right now (Portland, Oregon).

As far as our releases go, to date I'm especially fond of our debut singles [Coasting, Hysterics, Explode Into Colors, Tamaryn, Felt Letters]. The energy is there, and heightened, even if the performers have been in other groups. There's something about that first statement that is probably not best served by trying to explain it, but it's SOMETHING. An uncommon amount of our releases have been debuts. Hopefully this year will uncover even more gems. All of our future records are top secret, but I promise every one will be exciting, and if one cares to seek them out, they won't be disappointed.

Listen to a mix of releases from M'lady's Records here.