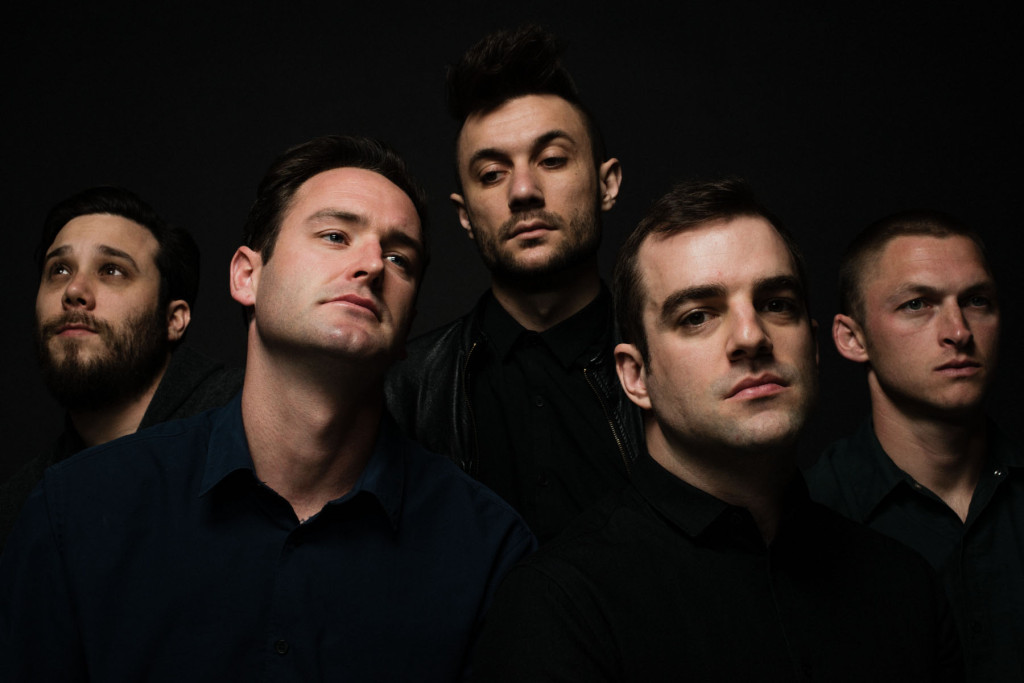 A record three years in the making will carry with it the burdens of its creators. And when revolving around an event as profoundly devastating as a breakup, and created by such sound shifting masters as Ceremony, those burdens will be conveyed and released with power and humanity. The L-Shaped Man, the band’s fifth record, and unquestionably their most deeply personal endeavor yet, maps out a wholly individual experience in ways that are equally universal as empathetic. “When she closed the door / you started throwing yourself / can you measure the loss?” wonders frontman Ross Farrar on “The Separation”.  Surrounding the album’s May 18 release on Matador, we spoke with frontman Farrar about writing hyper-personal lyrics, the new record, and his expectations now that it’s finally released.

You just got back from Belgium for Groezrock. How was that?

It was great. We played at around 8:00, right when the sun was going down. It was kind of on an inside stage, so we didn’t get to see a sunset or anything, but you know, when you play a show, you’d like it to be around that time. Any earlier, it can be kinda weird. Any later, people get tired. So you know, it was fine. It was ideal

What did the set look like? A lot of newer stuff?

The crowd reaction was cool for both?

Yeah it was great. The old songs always go off pretty crazy, and it was a hardcore festival, so the hardcore kids went a little wild. But people liked the new songs, it seemed like, which is what you always want.

The L-Shaped man is being referred to as a breakup album, with more than one breakup going into it. How does something so personal become such a collaborative effort?

I’m the one writing the lyrics, so whatever it is I’m writing about is whatever is happening to me in my life, or has happened to me, or what’s happening to me in the present. So the thing that was happening to me while I was making this record was, I was going through a breakup, so obviously I’m going to write about something like that because…whenever I’m going through any kind of artistic process, especially with writing, with using words, I’m taking from things that are either bothering me or concerning me or affecting me in some way. This was a thing that was really affecting me at the time, so I wrote about it.

But the other guys, if you listen to the record, and hear the bass, or the rhythm section, that’s all kind of punk sounding. It’s all kind of upbeat. But the lyrics are more downcast. The guitars are kind of yearning a little bit, kind of needing. From the lyrical perspective and from the guitars’ perspective, they’re kind of sad, but the drum and bass have our punk sound, which I guess is reflective of the time because Andy and I had both been going through breakups, so it’s kind of strange, kind of odd. But that’s just the way it went.

It’s kinda cool to hear guitars described as “yearning.” Pretty perfect for the sound of the instruments in general.

Yeah there’s kind of an urgency there, like a moaning or something, you know?

You guys really switch gears from record to record … how is the sound that you land on decided upon with each record? Is there ever any resistance or objection within?

We just kind of went into the studio and started writing songs right after Zoo. And the last song that we wrote for Zoo was “Video.” I don’t know if you’re familiar with that song, but it’s pretty similar to these songs on The L-Shaped Man, in the way that it’s kind of slow, it’s got that post-punky kind of sad, jittery, urgent kind of sound. That was the last song we did, so going into the studio and writing more songs, they just kind of blended into what we made for this record. We didn’t have any talk about it or any kind of plan. It’s just the way it went down, really.

I think catharsis comes from just playing the songs for a long time. I’ve listened to the songs many times, but I haven’t played them that much, so I’m still just trying to figure out how to be, and just how to present the songs in general. Once the record is finished, and we’re done touring and we’re done playing the songs and we’re onto the next thing, I think that’s when the release from the jaws [happens]. But right now it’s still very new, and I’m still trying to figure that out. I was worried because they are so much different in tone than all the rest of the work we’ve done. I didn’t know what I was gonna do onstage, I didn’t know what I was gonna act like.

Yeah, I was at that kind of surprise show at Kinfolk in Brooklyn, where you previewed a bunch of the record, and I thought the stage presence was super powerful.

Yeah, that was a pretty intimate space, also. Like having all the people in front of me like that, it was like a performing arts thing for me or something.

I think catharsis comes from just playing the songs for a long time … But right now it’s still very new.

How’d you land on that spot?

It was something that Matador set up. I think they knew someone there. I don’t know but I really liked the area too, the area was interesting. The room that we played in isn’t the best for music, I guess, but I liked it. I liked the way it was set up, and the way it sounded.

The first video you released was kind of a double video for “The Separation” and “The Understanding,” with one track going right into the next kind of seamlessly, but they’re not sequential tracks on the record. Why’d you pick them to make a video out of?

Those were the first two singles that everyone kind of agreed on. In the video, it flows together so seamlessly, when I first listened to the record I was kind of surprised “The Understanding” didn’t come right after “The Separation.”

As far as content goes, one song’s about breaking up, and the next song is about reconciling with that breakup, so it worked together perfectly. On the record, the way we did the sequence, we feel like they kind of also work pretty perfectly together. But I had a different sequence then, what we wanted to have. There’s even songs that I wanted on the record that aren’t on there, which I thought were gonna flow better. When you’re working with so many people that’s just the way shit goes down sometimes, unfortunately, you don’t get your way.