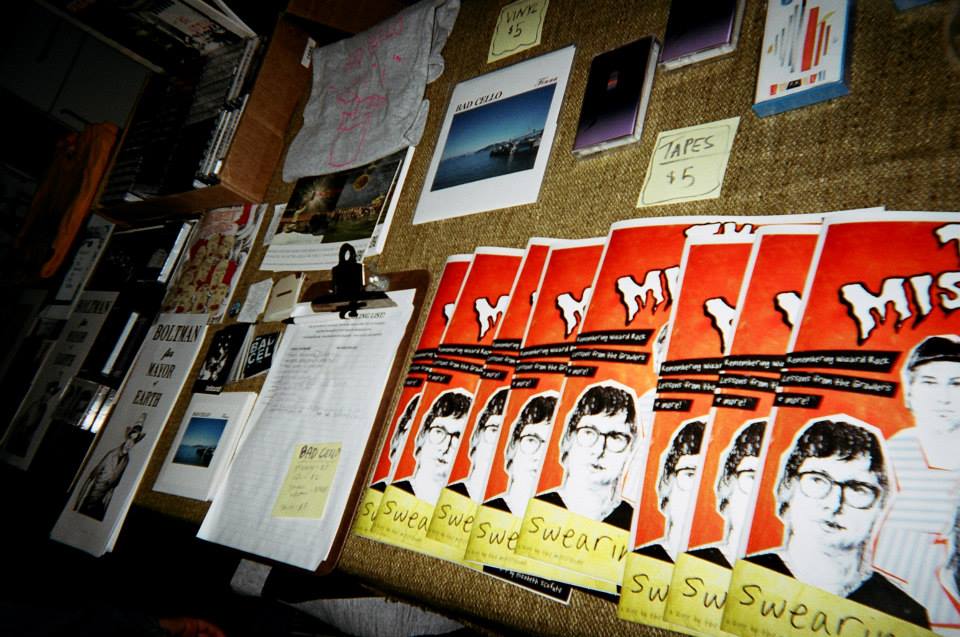 There is this dodgy practice space in Syracuse, about 15 minutes from my old apartment off campus. We used to throw shows there sometimes, and the bathroom light wouldn’t be working. Other times we’d melt into the stained, crusty couches smoking and etching our initials into the wall. I would sit during band practices and quietly admire my friends as they sweated and shivered through crafting a song. Ray McAndrew looked at me one night, and he got down on one knee. He asked me to release the debut EP from his band SSWAMPZZ. Garrett and Ricky from SSWAMPZZ were also there. I think we drank a celebratory beer. If I’m misremembering, there were several celebratory beers that would come after to make up for it. SSWAMPZZ’s record would be the first release on Miscreant Records.

My freshman year of college, my good friend Dan Creahan (who now runs Sweat Equity) started a label with some other folks who studied with us. They threw shows and pressed CDs. Dan asked me to help out with events and other marketing bits, being as official as young business students could possibly be. Dan left Syracuse after graduating, and I started a zine with my dear friend Lizzy called the Miscreant. I called the zine “Miscreant,” because I wanted it to be a place where outsiders and artists and everyone in between felt welcome to publish their work.

I strong armed my friends and boyfriends to write for the first couple of issues, contributing essays and poetry and photos of basement shows from Syracuse and around the country. There were even regular contributors to the zine from England and India, people I didn’t even know. Somewhat accidentally, I had found myself in an incredible, collaborative group of friends who were writers, musicians, illustrators and passionate people who all loved music.

I’d like to say I got the idea to start a label from Rob Gordon’s fictional Top 5 Records. Or from a college professor. And of course, I must certainly thank labels like Father/Daughter or Afternoon Records for giving me the idea in the first place. But really, what it comes down to is the fact that I have been consistently surrounded by immensely talented people for so much of my young life. The first time I saw SSWAMPZZ live, I had never really heard noisy, searing music quite like that before. I wanted to be a part of something that made this music as tangible as it was in the dark, dingey practice space. Every band I work with on Miscreant has opened my eyes to something special and powerful you can play and put to tape or wax. I am still so happy to be lucky enough to call these folks my friends and family.

Other friends, people I had thrown shows for in Syracuse, started asking about releasing their records on Miscreant. We had a huge blow out release show for SSWAMPZZ, where QUARTERBACKS and Friendless Bummer played. We hung green and black streamers all over the venue, Badlands. I used the label for college projects, applied for grants so I could pay for tapes and vinyl. The more people I met, the more chances would arise to work with new artists. Friends of friends would send me music to listen to. After I moved to New York, I joined the Frenchkiss Label Group, which inspired me to release more records each year. I continuously am overwhelmed with how blessed I am to have tripped and fallen into friendships with bands like Fern Mayo, Vagabon and Bethlehem Steel. (Who just came back home from touring together!) Any time I delivered Chris a new stock of Nicholas Nicholas tapes while he was bartending at Brucie, we’d sit and talk for hours over red wine. The boys from Comfy and Bad Cello would visit from Utica taught me extremely challenging drinking games to Tommy Boy and The State. Jawbreaker Reunion has had regular sleepovers in my living room. The last time they were here, we watched Shrek 2. I had found myself hundreds of miles from the practice space in Syracuse, surrounded by more love than ever. Before, I saw bands at house parties and Spark Art Space, and would later find myself at Silent Barn and Cake Shop.

This year has been filled with even more newfound collaborators and friendships. Father/Daughter Records and I started working together on releases and events. We’ve co-released some amazing albums in the last six months, from Soft Cat, O-FACE, and, soon, from PWR BTTM. We also threw an absolutely insane CMJ party last year at Silent Barn that last 14 hours (Moon Bounce went on at 2AM). The next few months will see releases from i tried to run away when i was 6, Comfy, Fern Mayo, Bethlehem Steel, Jawbreaker Reunion as well. I’m also excited to have gotten to work with Brett Davis and a group of wonderful comedians who performed at a recent Miscreant showcase. Hopefully Miscreant Records will put out a few comedy cassettes in the coming year.

When you are so blessed with so many talented people around you, it is best to take any opportunity you can to learn from them. It is so empowering to be a part of something that envelops your heart and your soul, something that lifts you up. Even more so when you are close with the person who created that something. When I listen to the new PWR BTTM record, for example, I can see myself sixteen and in my room, on the phone with Ben or Liv. James Rettig interviewed them for Stereogum, and said in his intro, “I sure do wish I’d had a band like PWR BTTM to help me get through high school.” When I read what James wrote, I thought about how I really want to work with bands who make people feel like they belong to something special. Being inclusive is essential, and yet often ignored, in the curation of art. Miscreant actively strives to be inclusive and create a community for everyone.

And so the more folks who find themselves working with Miscreant Records, the more opportunities present themselves for the label. While it continues to grow, Miscreant Records still aims to be a platform for young artists to release music. Everyone learns more about music and life if you strip away pretension and work together to connect an artist to a listener. It’s that inner-connectivity, this wondrous web of weirdos that makes up the Miscreant Records family is one that I always want to be open, safe, and welcoming.

I made a little playlist with some of my favorite songs from Miscreant Records bands. Excited to add to it as the year goes on!