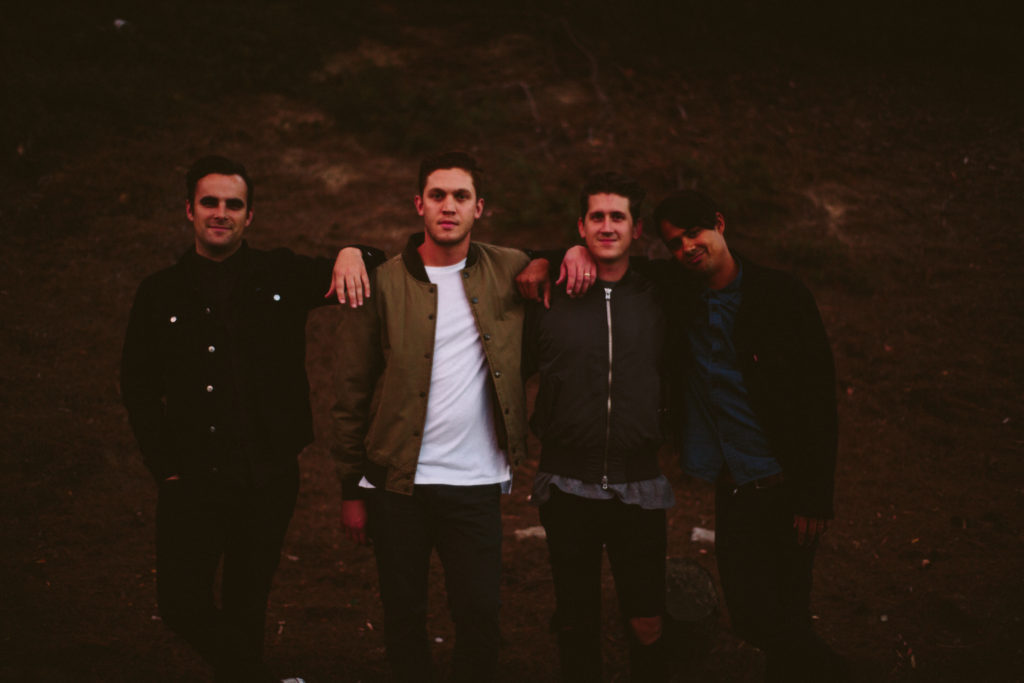 Alternative indie rock collective Hawai has been making waves with their sound since their debut EP released this past summer. Working All Night boasts an upbeat sound, a taste of what we might expect with an upcoming 2017 EP. More recently, however, they have been working on an acoustic version of Working All Night, recording live, stripped down videos for each track. We’ve got the exclusive premiere of their video for “Fault”.

In honor of the premiere, we got to throw some questions at Jake Pappas, who is responsible for Hawai’s vocals and guitar magic.

What is the origin story of Hawai?

We formed in 2015 as a new project from a previous band called J. Thoven. We’ve all played music together for quite some time now, and Hawai was kind of that step into adulthood in a sense…subconsciously that is. A couple of us have been hanging out since we were 9 and 10 years old. I married Jesse’s (drummer) sister, so there’s family blood in the band. We all know each other’s deepest darkest secrets. Should I share some of them? No? Ok.

What is the first song/record you remember hearing, and who introduced it to you?

Does that first song/record have any influence on who you are as musicians now?

Ya big time! I was blown away by the way Lindsey Buckingham played guitar. It’s definitely what made me interested in playing music. Before that, music was always something that I listened to, but never really payed attention to. It was background noise. But Fleetwood Mac made me want to do what they were doing.

When did you choose to pursue music? Was there an aha moment?

I was going to school in San Diego and wasn’t too into that whole thing. I chose to fill my time with writing songs over doing homework or studying. I played at an open mic on campus one night with Jared (bassist), Jesse (drums), and my sister. At the time we weren’t a band, but it led to more small shows, recording, and slowly built into a proper band. It came time to register for Fall classes, and I thought, “Do I really wanna go back to school to study something I’m not even passionate about?”. So I made the decision with the band that we’d make a go out of the whole music thing. And here we are, 8 years later pursuing what we love.

What made you choose to shoot the video the way that you did?

We wanted an alternate version of our EP, and thought it would be interesting to have it recorded live. There’s something intriguing when a band simplifies their songs. It draws you in a bit more, and makes you pay attention. That’s what we were aiming for.

Are there any fun anecdotes from shooting the video?

We had this idea of having a crazy light show for the shoot with fog and lasers and all that. When we got to the studio, we started setting everything up and plugged in the fog machine to warm it up. After 30 minutes or so, we got nothing from the fog machine. We tried plugging it in to different outlets, resetting it 20 times, flipped this switch and that switch and nothing worked. After an hour of trying everything, we gave up on it. So we improvised and did without the light show and the fog. We redesigned the look for the shoot, and as soon as we finished our last song, the fog machine started working.

How can you imagine fans listening to “Fault”?

Well I left that one pretty open for interpretation. So I would hope that it’s universally a song that anyone could connect with. I like the idea that one person listens to it and is affected in such a way where they feel like it was written for them. I also kind of like imagining a group of friends sitting around a table, arguing about what the song’s REALLY about. I heard someone say that her and her friends would stay up late arguing about what the band R.E.M. stood for. Those types of “who’s right?” conversations are always funny. It’s like politics.

What can we look forward to from you?

New tunes at the start of the new year, local shows starting in February, tours starting in the Spring. Next year will be a busy one. We’re really excited to share our new music.

Keep up with Hawai here.

PrevPreviousSophe Lux & The Mystic Premiere Video for “Waking the White Winged Horse”, Talks Inspiration and All Are One
NextHandgrenades, “Daily Routine”Next