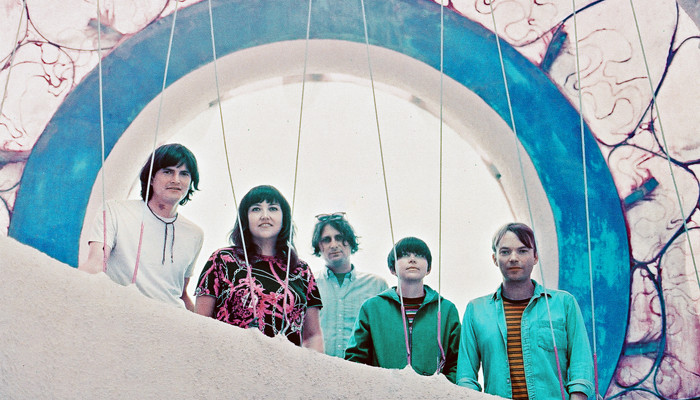 “Nothing like standing in a doorframe all day.” So coos Michael Olivares, front-person of Oakland outfit The Mantles, on the chorus of a coolly assured paean to the still life, “Doorframe”. The song feels like the spiritual core of All Odds End: lightly bemused and quietly melancholic, confident in the essential and enduring thrills of glistening harmony and understated swagger. Similarly to Pass the Ringo—the underrated 2013 full-length by new Mantles bassist Matt Bullimore’s old band, Legs—the players maximize impact by holding back. And the addition of Carly Putnam on keys yields dividends: hear the supple tandem spiral of keyboard and guitar melodies. All Odds End is The Mantles’ third proper full-length in six years and second for the venerable Slumberland label. Above, we’ve premiered its music video, directed by The Mantles’ drummer Virginia Weatherby. Below, she shared some background on its production.

The palm trees in the video remind of the album art. Why did you decide on the location and props?

We did want the video to relate to the album art. The initial idea was a video shoot frolicking amongst palm trees in the Bahamas, but since Slumberland wouldn’t go for that, we did the second best thing, which is buy some $5 dollar blow up palm trees and film at the Port of Oakland—the only place we could find where security guards didn’t kick us out.

And about the fanciful post-production flourishes, do they reflect your vision of the music?

On this song in particular, it’s the first time we’ve really ever drifted into slight 80’s new wave territory, so we decided to take the super cheesy 80s effects and just run with it. We also found out while filming this video that mirror tricks are very satisfying. If you need 30 minutes of mirror trick outtakes, we got ’em.

I understand All Odds End is the first Mantles album recorded with bassist Matt Bullimore. He looks sharp in the video. Can you speak to his contribution to the group’s sound?

He does definitely look rather sharp. His selection of striped shirts would impress you. He has helped create a super solid rhythm section on this record, great backing vocal melodies, and has brought an overall enthusiasm to the band. This is also the first album that Carly [Putnam] (the keyboardist) has played on. She also looks sharp, and always brings to the table some effortlessly awesome keyboard leads. We are very lucky to have found these two.