Chapter 1 of The Red Bicycle by Kai Flanders 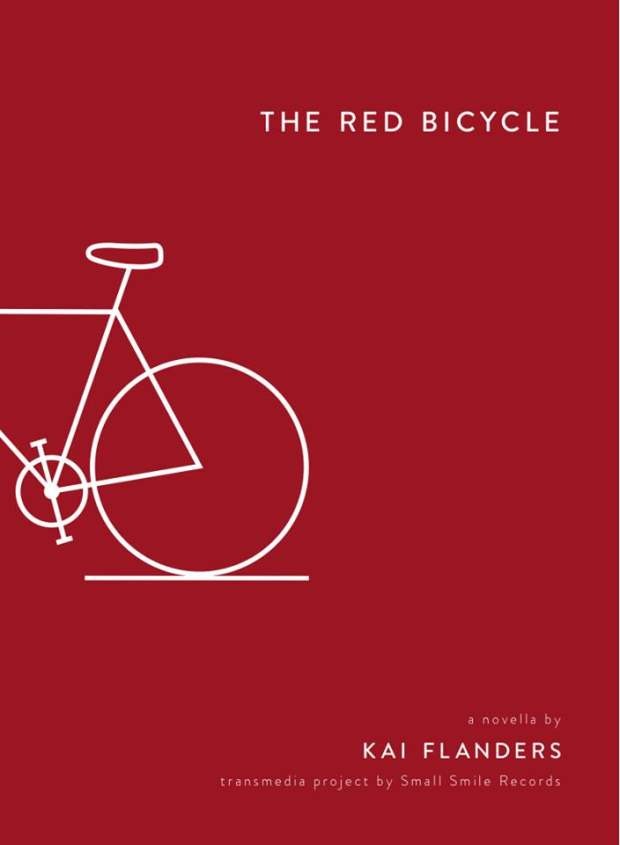 Kai Flanders is a writer and music journalist based out of Los Angeles and New York City. His first book,The Red Bicycle, is a transmedia novella that includes a graphic novel by Kat Glasheen and soundtrack. The soundtrack includes contributions from Criminal Hygeine, David Lapinsky, Gracie, Liphemra, Gothic Tropic, Sam Broido, Will Sturgeon, Yonatan Kahn-Tietz, and Pratley. It will be released August 28 by Small Smile Records, Since the book is meant to be read to music, Impose is proud to debut Chapter 1, along with the accompanying composition by Gracie.

This is a story about a bicycle. It was a new, red bicycle– a vintage model, not authentically vintage but designed to re-imagine a certain beach cruiser, which had been, and now was again, an extraordinary success of a bicycle. The original had been conceived on the tenth floor of Presto Bicycle’s offices in Downtown Los Angeles by a designer named Karl Starley. Starley had been creatively blocked for months, failing to sketch a spoke, when he saw a burst of light in the sky outside his window. He watched a small plane fall from the sly and disappear into the city sprawl. His pen, of late useful as little more than a paperweight, immediately began inking what would soon become a bicycle, a bicycle which would, in turn, become the inspiration for another bicycle, the bicycle this story is about.

The falling plane that became a bicycle crashed into a house in Echo Park where a ten year old girl named Rosalie Gordon lived with her father. At the moment of impact, Rosalie was waiting for her father to come home from work in an armchair near the window, eating olives which she had stuck on the tips on her fingers. She had eaten only those olives on the index finger, thumb, and pinky of each hand. Rosalie loved symmetry.

Sitting in his tenth floor office, Starley could not have known that the source of his breakthrough was also the cause of Rosalie’s death. He had only seen the streaking form of the descending plane and felt a tremendous creative revelation surge through him. The initial draftings had taken him less than three hours; it was, as he would later describe to a colleague, as if the haze in his mind had been parted like the Red Sea. Through an error at the manufacturing plant, the initial order of bicycles were all painted “firework red”. The first time he passed by one of his red bicycles in a store window, it occurred to Starley that the crashing plane too had been red; it seemed to him that the red bicycle had jumped straight from the sky, through his mind, and into the world, and that he had not had much to do with it.

Starley’s red bicycle soon became Presto’s best selling model and remained popular for nearly a decade. When Presto was absorbed into another company, the red bicycle was significantly redesigned in an attempt to modernize the heavy frame, which resembled the body of an aircraft. This move, along with a change in the paint to a shade called “radish”, proved disastrous and the bicycle was pulled from distribution. By this time Starley had died of lung cancer. He never designed another bicycle, but continued to come to the office each day to look out the window.

Starley’s design remained out of production for over twenty years until a bicycle engineer named Adam Dowitz discovered one of the red bicycles while cleaning out his recently deceased father’s basement. Like Starley, Dowitz had been suffering from an extended creative blockage, stemming from the expectation and aftermath of his father’s death. But after he saw the red bicycle he sketched his own imitation a single afternoon.

Dowitz’s model was a heavy bicycle, a bicycle of sturdy quality, the sort of bicycle which looked like it might have Made In America soldered onto its frame, but in reality consisted of parts manufactured in several factories across China and then combined in a large cardboard box at a processing center in Fresno, California. One particular set of these parts was the bicycle this story is about– Serial Number: R1014. Disembodied in its box but a bicycle nonetheless, it was loaded onto a semi and driven to a bicycle store in the Little Tokyo district of Los Angeles. There it was assembled, the tubes of its tires inflated with air, and put out for sale. It waited to be sold for less than an hour; a young man came in and bought it without hesitation.

The red bicycle was at least three standard sizes too small for the man who now pedaled it. He was not the man who had bought it from the bicycle store. He was a man who, an hour earlier, the girl who sat across from him at the pizza shop had called Jackson. Jackson pedaled east in the direction of the river, the blood drying and cracking on his jeans with the awkward movement of his too-large knees.

It was light still and no sun and no shadows. Jackson steered the red bicycle through Little Tokyo, with the shoe-shine outline of Downtown silhouetting him against the wellkept streets. The streets were excellent on the tires. Quitting time had filled the sushi bars and cafes; people pulled up to dully shining counters and ate fish and beckoned for beer to be brought. Jackson was the only person on the street who rode a bicycle. There were other bicycles chained to posts or hidden in alleyways.

The gradual arc of the lampposts of the river bridge appeared and then the bridge itself. The bridge did not bridge any water, just a wide concrete canal layered with graffiti. As Jackson rode across the bridge, its electric lights clicked on at their mechanically appointed time and the shadow of the ride bicycle appeared, elongating itself as it drew away from each light and then snapping back into shape as it passed directly under the next one, stretching longest at the last light until it disappeared completely.

Across the bridge the road roughened and made the bicycle’s wheels jump. When Jackson arrived at the concrete colored hospital, he placed the red bicycle against a low wall, also concrete colored, at the edge at the parking lot. There it waited to be stolen. It was not a long wait.

In the hospital's lobby, Jackson went up to the reception desk and spoke a man’s name to the nurse and showed her his Visitor's Pass and she told him Just a moment and looked down at her list of names.

Yes, said Jackson. I usually come Thursdays but I wanted to see him today.

I’m sorry, but what relation are you to Mr. Gordon?

I spend time with him here once a week.

In what way do you mean spend time?

In a mandatory way. Jackson pulled out the order the judge had signed and handed it over.

I see, said the nurse. I’m afraid that you can’t see him because— because well, Mr. Gordon has passed away. She looked over the order, with pencil marks tallying hours served, and frowned. I’m sure we can do something about finishing these hours, she said, almost brightly.

That’s not why I want to see him.

When— when did he die? I was just here yesterday.

He passed away last night. The nurse gave Jackson a long assessing look. Excuse me young man, she asked, are you bleeding?

But you’ve got blood all over your pants.

Jackson looked down at his pants and saw that he did.

Are you sure you’re not hurt? You’re covered in blood. Where did you come from?

I’m sorry, I’m not following. Have you been in some sort of accident?

Jackson looked up at her sharply. Yes, he said, there was some sort of accident.

I think you need to see a doctor, said the nurse.

You won’t let me see Mister Gordon because he’s dead, even though he wasn’t dead yesterday.

The nurse was now trying to catch the attention of the other nurses working in the lobby.

Jackson nodded to himself and said: I’ve taken something that’s not mine. I’ve got to return it.

Young man, I think you’re in a state of shock. I can’t advise you leave. Young man—

Jackson left the nurse’s words behind and went out to the parking lot. The red bicycle was not where he had left it. He stood looking at the place where it had been. Then he sat down on the pavement and began to cry. There were things happening as cried. In a kitchen down the street someone cracked an egg; people received flowers and people who were expecting flowers did not receive them; a young Japanese student jumped from an overpass after failing her college entrance exams. The sun rose in Istanbul, an old man looked up the word “inexorable” in the dictionary, and a hummingbirds heart exploded as it hovered among some flowers planted along the edge of the hospital’s property. It’s body landed at Jackson’s feet.

Hummingbirds are the only birds that can fly backwards.