Track x Track: Everyone Is Dirty – My Neon's Dead 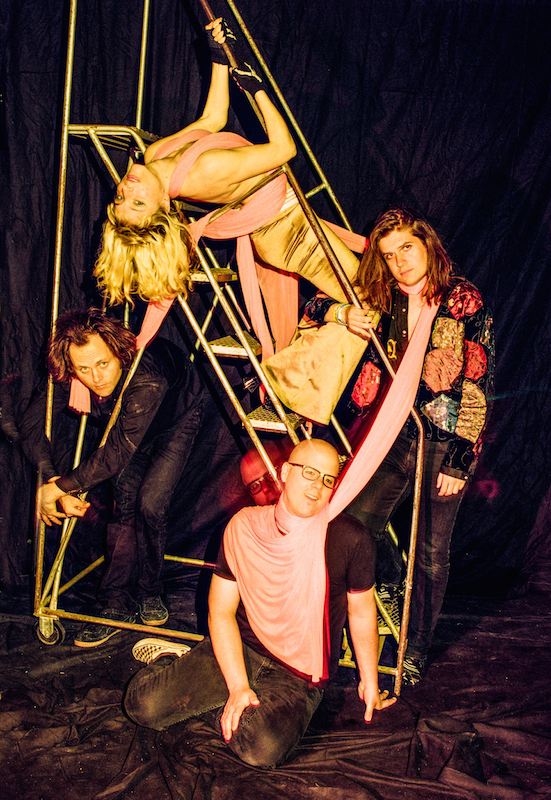 Photo Credit: Ginger Fierstein
Near death experiences have made plenty of impact in the lore of great rock ‘n roll. To wit, …Like Clockwork, Queens of the Stone Age’s 2013 LP which followed and reconciled frontman Josh Homme’s temporary death on an operating table. Whereas that album stared into the abyss and dove in headlong, Oakland group Everyone Is Dirty have bounced back from Sivan Lioncub’s (lead vox, electric violin) brush with death their own statement that finds beauty in the pain and rocks nearly as hard.
“When my liver failed from an allergy to antibiotics, I felt like a prisoner in the hospital, and was in complete denial,” shares Lioncub. “I wouldn’t let the band cancel any shows. We were supposed to play Noise Pop, SXSW and Treefort in Boise and I was convinced we’d be going. It was a hard reality to face when I realized I wasn’t going anywhere. I felt so sad, like I let the band down and I had no control over anything that was happening. Writing was something I could do from the hospital bed.
I keep a journal, and my entries from that time are angry, or spaced out, hallucinating fantasies in a Dilaudid stupor. Many of the lyrics of the album were written during this time. We do all of our recording at home, where Chris has his studio, Donut Time, so for lack of being able to tour, we focused on what we could do, which was record. My energy level was scary low, but we recorded anyway. Recording music was a total escape from otherwise terrifying times.”
My Neon’s Dead is out today via OIM Records and to celebrate we had Lioncub and Christopher Daddio (guitar/vox) write a companion haiku for each song on the album. Check it all out below while streaming the album and be sure to order your copy of it here and Bay Area peeps can catch them tonight at Rickshaw Stop for their record release show.

Track by Track Haikus by Sivan & Chris:
San Andreas
Sun drips over West
Spiral out whale streams of foam
We are one again
Silver & White
The boys in the rink
Ice skating icicle breath
They kiss anyway
My Neon’s Dead
jaw clenched chews on tongue
swallow this pink octagon
not today fellow
Dilaudid
Scuba dive at home
Watch out for hangnail bandaid
Hygiene is vital
3D Light
Up inside the trees
Whistling with the raccoons
The gate swings open
Wax Mannequin Mode
In the frozen pond
the bees are disappearing
Spun out of water
Alien Birth Scene
Push that fucker out
universal ding dong bell
the stars are talking
Mermaid
Their blue body shines
throwing up on Mission Street
Where are you from girl?
Running Out
deep inside the well
let’s re-amp the symphony
before the day breaks
Mendo
Note frequency chart
pinch my nipple in a head shirt
last year’s newspaper
Lady Liberty
Look it’s my pick sock!
Stick a finger in your butt
Chewing nicotine
Journeyman Plumber
Underwater whales
Waging war on working men
journeyman plumber
Window Eye
Last journal entry
The water’s getting hotter
Cry Tekeli-li!
PrevPreviousSmall Leaks Sink Ships presents Dear John Connor
NextEssi, "I, I"Next