A Living Tribute to Death By Audio 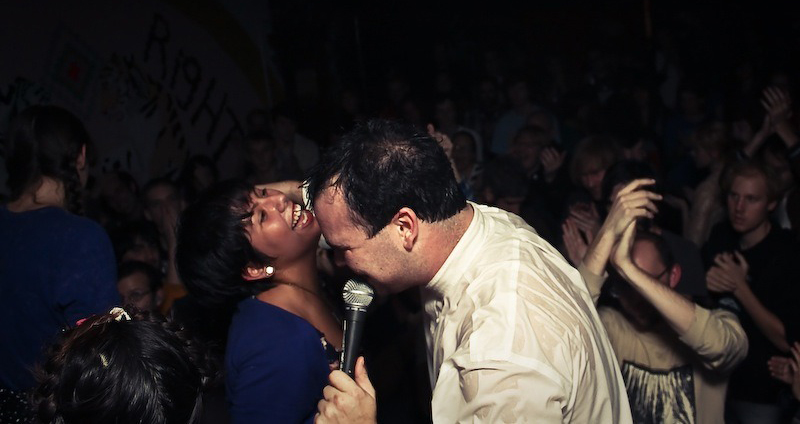 In the Brooklyn of 2014 it’s easy to fall into one of two camps: those who lament the Good Old Days, and those who are capitalizing on its corpse. But for the last seven years, Death By Audio has remained a constant for those of us in the middle. A working man’s cathedral led by its fearless Pope, Edan Wilber, DBA has been a sanctuary for the true independent spirit. Without breaking a $10 bill, you could watch aspiring acts like Parquet Courts and Ty Segall open for bands like Thee Oh Sees and Future Islands. It’s where Double Dagger called it quits, and hundreds of others got their start. It would be unfair to compare it to the countless venues that have come before it, and those that will come after, but it’s safe to say Death By Audio will long be remembered, because it created so many memories for so many people.

In the spirit of reminiscing, we’ve asked as many of those people we could to give a few personal words about what DBA meant to them and their music-watching experiences. And while we received upwards of 50 submissions, there is one theme that rings true throughout all of these testimonials: inclusion. Death By Audio was a place where weirdos, outsiders, and artists felt at home. There’s no better realization for those who have been searching for acceptance than to simply feel welcomed. And that is what Edan, Matt Conboy, and everyone who ever worked, lived, performed, or put on shows at DBA did on a nightly basis.

Death by Audio also holds a special place in Impose’s heart, as its trajectory almost mirrors our own. Some of our very first show photos were taken inside the then-bare walls, and you can rest assured we will be there until the very end. An end no one here wanted to see, but one we knew we had to commemorate in a way that would stand out above our normal featured content.

The following essays are displayed in alphabetical order (with Edan’s at the end), and the photos in chronological order, allowing you a glimpse inside Death By Audio’s walls “through the years.” We will also continue adding testimonials as they come in, up until DBA’s final show on Saturday, November 22. If you would like to contribute, please e-mail the editors. (Everything past Edan’s are the newly-added testimonials.)

There are very few words to describe the loss of an institution, a building that has held a community together. This is not a death, it is not a catastrophic occasion, it is simply something we will all dearly miss. Goodbye Death By Audio.