All Dogs embrace the emotional 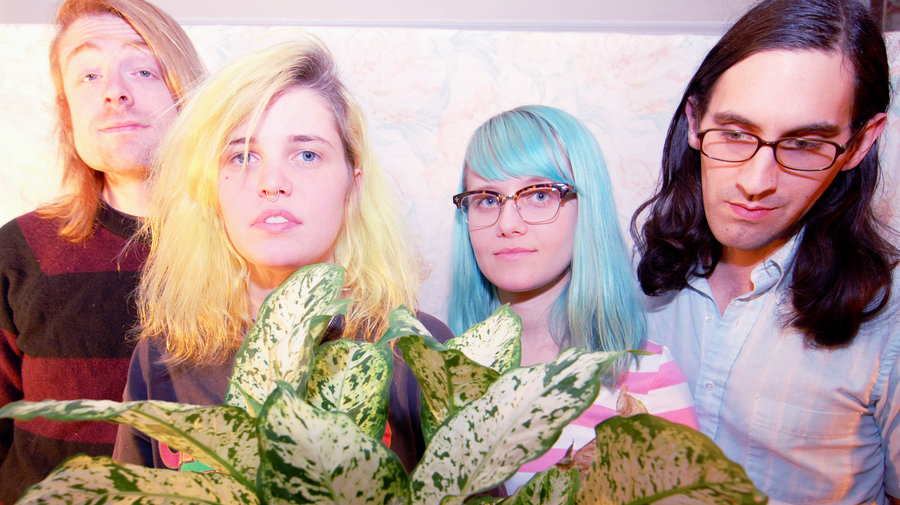 The passion of All Dogs fans is deep and vital. The past few weeks have borne witness to various incarnations of “ALL DOGS IS THE BEST BAND IN THE WORLD” from fans on social media, outpourings of love that might seem gratuitous to the uninitiated. Doubtless part of the enthusiasm that the four-piece has culled surrounding the release of their first full-length, Kicking Every Day, out now via Salinas Records, has to do with the love that they themselves radiate—for their audiences and for each other. I’m met with an immediate sense of mutual respect when I meet guitarist/singer Maryn Jones and guitarist Nick Harris and we settle into the tiny, dim-lit storage room in the mausoleum showroom-turned-venue of PhilaMOCA.

Philly is a special stop for the group; it’s Nick’s home city and, more recently, bassist Amanda Bartley’s as well. In addition, the band recorded Kicking Every Day in the city, with producer Kyle Gilbride (who has recorded Waxahatchee, Swearin’, and Girlpool, among others). Tonight’s show is sold out, and it’s just their fourth on a two-week-long August tour with The Sidekicks before they kick off their own tour headlining along the West Coast through late September.

Maryn tells me that at this point in time, the four have grown closer than ever. That strong personal connection to each other is evident just in this conversation with Maryn and Nick—the genuine kindness and warmth that they exude is enough to put anyone at ease, and the two take comfort in each other’s presence, their laughter in sync.

Though three-fourths of the band—Maryn, Amanda, and drummer Jesse Wither—lived in Columbus, Ohio while Nick lived in Philly during its writing, Kicking Every Day was a more collaborative work than any of their past releases, dating to early 2013. “We’d get together for a few days every couple of months and just sort of blast ‘em out real quick,” Nick says of this past year’s process. “And then we wouldn’t touch them for a little bit. And then every once in awhile Maryn would email me a video of her playing a song and say, like, ‘Hey, this is how it goes.’ As opposed to the writing process before, it wasn’t just like, here’s the song, it’s done. Maryn definitely came in with a pretty well-developed skeleton of the song, but we all built up on it.”

“Now, it’s like, Amanda writes a guitar part so the song sounds totally different from any song I would ever write, and I love that,” Maryn adds. “And Nick will be like, ‘What kind of part should I play? Here’s this kind… or this kind…’ Everyone’s just so creative, and it’s really cool.”

All Dogs cites influences as varied as Fleetwood Mac—“Leading Me Back To You” features a devastating rendition of the outro to Stevie Nicks’ “Silver Springs”—The Lemonheads, Amanda’s beloved Superchunk, Maryn’s high school favorite Elliott Smith, and Jesse’s road staples The Band and Neil Young. It’s unsurprising, then, that the album ranges in sound from hard-hitting pop-punk anthems like “That Kind of Girl” to the affecting acoustic album closer “The Garden.” Maryn intimates that she’s been making a playlist for car rides: “And I just wanna debut it. So give me the fucking aux cord. Come on, guys.” Nick cracks up. “Yeah, I’ll give you the aux cord sometime. Deal.”

The result of a clear willingness to riff off one another has been a record that’s stunningly dynamic, with a remarkable combination of warmth and aggression, sweetness and rage. This mixture is embedded in the headstrong drive of the record’s penultimate track “Skin,” in which Maryn declares, “Don’t you ever say that I’m wrong, ‘cause I won’t take it / I will find a way to justify my pain” against the crush of the guitar. This sense of self-loathing doubled with an almost self-righteous assertiveness comprises the big paradox of Kicking Every Day—there’s a pervasive sense of frustration with one’s own feelings and reactions, but also the sense that these feelings and reactions are valid, and their expression necessary.

Later in the same song, Maryn repeats the chilling, hushed “I will remind you of my mother” over a tempered guitar section. It might read negatively, as a threat, but Maryn knows better than to leave that threat unqualified. In the liner notes it’s the one line in the lyrics that’s asterisked, with the footnote: “and I’ll remind myself of my mother too. I find myself going through similar things she went through and understanding more why she is who she is. It’s incredibly humbling, and I appreciate her and all that she’s experienced.”

This decisive message of respect for a woman who possesses a special strength and resistance gives depth and compassion to the whole of an album that also taps into a profound anger. Asked about the gendered aspect of the record, Maryn says, “I think about that stuff all the time. It’s what I do.” She laughs. “Especially being a touring musician as a woman and having to face that relationship to the world, especially in the music world.” Though the record isn’t explicitly about Maryn’s experience on tour, she notes that it deals with the longstanding preconception that women are too intensely emotional, a preconception that has at times extended to her view of herself—it’s a view she has had to combat in order to accept and embrace her emotionality.

“Women can be perceived as hyper-emotional, or out of control, or ridiculous people for just feeling normal emotions and expressing them in whatever way they feel they need to,” she says. “I definitely have experienced that in my life, and I feel like sometimes that can speak to how I think of myself. A lot of the stuff on the record is about that, a lot of weird self-hatred that I don’t really think I deserve to feel against myself. Like on ‘Skin,’ where it’s like, don’t even try to cross me, ‘cause you’ll get hell. It’s true, but it’s also… it’s not true. I’m just being human, you know? I’m just feeling.”

Maryn has committed to touring full-time now—playing in Saintseneca and her solo project Yowler in addition to All Dogs—but she remarks, “I’m not really fit for touring. It’s funny that it’s my job, because as a person I’m super sensitive to my environment and really controlling. Not necessarily in a negative way, but I know what I want or need to feel sane and comfortable and not anxious.” At the outset of touring with Saintseneca, in which she’s the one woman alongside four men, settling on a positive dynamic was difficult. “There were just a lot of times when I got pushed to the point of, I’m freaking out and I can’t deal with this right now, and externalizing that, because I’m an incredibly external person.”

She says she’s found herself having to explain preemptively that these moments are inevitable. “In All Dogs, it’s just like, ‘Guys, I don’t know what to tell you, but… it’s just gonna happen and I hope you can still love me…’ And I’m working on it. In every tour, I try, but it’s hard.” This sentiment comes through on the record: “That idea of getting pushed to a point where you do bring out those super-emotional things, and kind of lose it. And then I think sometimes—not that anyone actually feels this way, but—in my head, I’m like, Oh, they think I’m just this crazy bitch who’s on her period all the time! Which is not, you know, real. But it’s what I really like telling myself.”

Women can be perceived as hyper-emotional, or out of control, or ridiculous people for just feeling normal emotions and expressing them in whatever way they feel they need to … A lot of the stuff on the record is about that, a lot of weird self-hatred that I don’t really think I deserve to feel against myself.

But she emphasizes that the group is very mutually supportive, engaging in critical conversations from time to time to address specific issues. “I wouldn’t really feel comfortable being close to people that I couldn’t level with,” she says. Nick notes that he’s gained a special awareness of issues he hadn’t thoroughly considered before joining the band in early 2014. “It’s been really beneficial, because I mean, fuck, it’s just fun to play the songs—I love playing the songs, and I love playing guitar and hanging out with my friends—but I also feel like it’s made me such a more conscious person, and a better person. I would never have considered myself a disrespectful or shitty person in the past, but I think that everyone could benefit from being more hyper-aware of how people in general are treated or perceived, especially within the music scene.”

In spite of the problems she and her peers must continue to grapple with, it’s a scene that Maryn has obviously engaged with and learned to love deeply. “I grew up being onstage and being in front of audiences, and I think I just know how to turn that switch on. I mean, it’s not every night that I’m super energetic, sometimes I’m like, ah, what am I doing? But I just have that switch inside my brain that’s like, All right, I’m performing, go. And it’s really cool. That’s part of the therapy of it, writing these songs that are about very personal things that I just want to tell people, and then it’s so nice, that moment when you get onstage and you’re like, ‘All right, here we go. Let’s share this with you.’ And it gives you energy,” she says. Talking about it alone seems to give her energy. “Sometimes even adrenaline.”

Onstage later in the evening, the four-piece is speeding up time, emanating a tangible energy that ripples through the audience in the packed room. Maryn is soft-spoken between songs, laughing as she says, “We’re playing a bunch of new songs. I hope that’s OK,” but each time the music resumes she exhibits a power that’s startling. Between her clear and forceful vocals, the piercing guitars, and the crash of the cymbals, the performance is a complete embrace of the so-called “overflow” of emotion that Kicking Every Day is a manifesto for coping with and ultimately pushing through. Watching the deep mutuality and friendship between the four of them unfold is hugely gratifying. Jesse smiles behind the drumkit; Maryn and Amanda turn to face each other and lean in; Nick is shredding, long hair down in his face.

“I love Philly so much. It’s like a home to me,” Maryn tells the crowd. She’s met with fervent applause, and I can’t help but think in this moment that All Dogs fosters a kind of home in whatever space they occupy, simply through cultivating sincere enthusiasm and respect for each other and for those around them. They play “Buddy,” an old favorite from their 7” released in 2013, and Maryn’s gaze reaches across the sea of eager faces as she sings, “You will always be my home, my friend.” The message carries.

PrevPreviousMind Over Mirrors on electronic music pioneers
NextMore Than NerdcoreNext