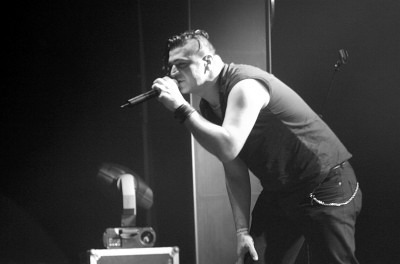 Black Strobe’s decision to put out a rock album after making solid dance music for 10 years, like some perverse reworking of Dylan going electric, has caused much gnashing of teeth among its European fan base. Last weekend, Paris-based vocalist Arnaud Rebotini flew in to New York to explain why despite what people say, it absolutely has to happen.

“10 years we make dance people. We need to have an evolution,” he says, sitting in the sunshine at an outdoor café. He is a reassuringly broad man with an ample mustache and a black leather jacket. Although I think he meant to say “Make people dance” I don’t correct him-it’s less from politeness than out of a sense that Black Strobe probably has produced more than a few “Dance People” over the years, and because I’m enjoying imagining what these delightful sounding creatures must look like.

The new album is called Burn Your Own Church because up till now, “We have done a pure electro career, and now we burn our past with this album.” The idea of destruction is important to the substance of the songs too, which are centered around the themes of a traditional rock album as Arnaud conceives them: “Sex, love, addiction.” What burning your own church means, he says, is “destroying the only thing you believe in. The only thing you could believe in.”

“But why would you do that?” I ask sunnily, happy to play the pragmatic American, “To make yourself free?”

“No,” he says, happy to play the nihilistic Frenchman. “We don’t know why we do it. That’s the trick. It’s beautiful when its burn[ing]. Afterward it’s painful.”

Despite the tough guy exterior, (He is obsessed, for example, with Norwegian Black Metal bands because, “They make terrorism”) Arnaud is a real sweet heart and ultimately, a formalist. All he really wants to do, he says, is “Just to make a good album. With emotion. Like The Cure’s first album. Like After the Gold Rush. In my way,” he adds hastily- “I’m not Neil Young.”

Its critical to remember that this is the group’s first full-length album after 10 years of putting out twelve inches and remixes. And to Arnaud, the purpose of an album “is not to make dance people. It is to have at home. When the first goal is to make dance people, you can do beautiful things around that rule. But dancing is too small to make an album.” Hence the sudden stylistic shift.

The big question now is twofold. Will the Europeans accept the singer, bassist, drummer, and guitarist on stage alongside the laptop and conversely, will the Americans accept the laptop onstage with the band? Black Strobe has tried out its new live show in Europe, playing in clubs in between DJ sets which Arnaud says has “really surprised people. In Europe they think, live, it’s boring. It’s exactly the reverse as in America.”

To Arnaud, America is “The country of entertainment,” and Americans “don’t want to pay to see a guy hidden in a DJ booth playing other peoples music.” He actually finds it refreshing that Americans “resist the DJ power” which “In Europe we have done too much with, so much that the DJ has become the symbol of the artist.”

But the question remains whether having lyrics and a classic band set-up will sweeten the Americans on techno, or just make it more confusing to them. We may have witnessed its birth, but we have decidedly lost hold of electronica in its late adolescence. We lack the mentality, the subtlety, the drugs.

For the French audience, the English lyrics Arnaud sings are cool noise. But to an English speaking audience they threaten to take over too much importance, breaking the concentration necessary to register those small changes in an otherwise monotonous sound texture that are vital to the dramatic interest of electronic music. Lyrics and onstage drama tend to require a different kind of attention- one attuned more to the verbal and emotional than the structural-and the kind that needs cultivation if the U.S. is ever to fall head over heels for electro.

But what if, just what if, the experiment worked? Imagine a new crowd culture that combined the best of rock and roll’s emotionalism and idol worship with the best of the self-sublimation and total absorption in the music that characterizes, say, the German minimal scene. Imagine, that is to say, a whole nation of Dance People rolling out of Black Strobe shows this summer like it’s a Ford assembly line.

It might be nice to reverse the flow of cultural influence for a change, too. For Robert, “American cultural imperialism” as he calls it, is an absolute given. Why does his band have an English name? “Because everybody has an English name,” he answers, without a hint of bitterness.

He doesn’t really see anything strange about singing all the lyrics in English, either. To him, it’s where his roots lie. “ I grew up listening to a lot of soul, a lot of rhythm and blues. My culture is more that than Georges Brassens,” he says, adding that Serge Gainsbourg himself “got a lot of inspiration from American Music.”

I for one hope that when Black Strobe makes its U.S. tour, the Americans will love and misunderstand Arnaud as ardently as they loved and misunderstood Gainsbourg in the summer of 1969. It was a great summer.