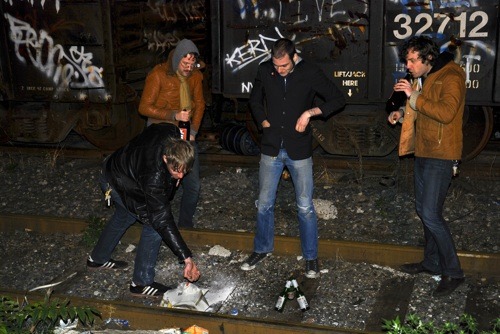 On most Sunday nights, normal people usually recuperate from the weekend and prepare for the upcoming work week. I find myself tagging along in the Golden Error tour van. They’re armed with M80s. They’re going to blow up Bushwick.

Drummer Jeff Ottenbacher chooses some abandoned railroad tracks in Bushwick as the site of destruction. First things first, we need to make a stop to pick up some sundries: alcohol and tomatoes. Guitarist Keith Blackwell graciously offers me a 40oz bottle of Budweiser. I stand on the side of the road watching them as they divvy a ziplock bag of suspicious looking white powder into smaller bags from the back of the van. The guys laugh, thinking about what this must look like.

We make a short hike through urban wastelands to the where all the action will take place. As we crawl under and climb over railroad freight cars, scenes from Stand By Me come back to me. Some sketchy guy asks if we’re looking for someone. The guys ignore him. The tracks are strewn with empty bottles of beer, so that you can hardly step on the ground without rolling on one. The wind gnaws at our faces.

They pick a spot lit by an old warehouse nearby. Ottenbacher sticks an M80 into one of the bags of white substance. “This is how Golden Error rolls!” he laughs as half of the white powder catches in the wind. Bassist Jordan Somers has the honor of lighting it up. The guys brace themselves. The fuse sparkles for what feels like forever, then dies. A collective “Awww!” escapes the band.

Blackwell stoops down to investigate as singer Eric Hughes says, “Be careful, dude.” “The flour put out the fuse,” Blackwell says.

The bags of flour are blown-up with the remaining M80s. The tomatoes get ignored. Blackwell goes back to the first M80, lamenting the waste of explosives. He picks up a few of the empty beer bottles and tries to lean them against each other so that the mouths meet. “What we should do is, we get a fire going underneath and put the M80 on top. It’ll burn through the cardboard,” he explains. Before they can get the fire lit, the sculpture topples.

Ottenbacher suggests they just light up some paper and set the M80 on top. Again, they are defeated by the wind, particularly after the paper they do light on fire starts to drift away. Hughes says, “That could catch something on fire!” Not without longing, they abandon the M80.

They pull apart a big-screen television that has been dumped and manage to squeeze themselves into it, turning themselves into a parody of the Monkees. Their faces are magnified and warped behind the screen, stretched out of shape. They look like robbers wearing stockings over their faces.