Patterns from the outside: an interview with Grouper 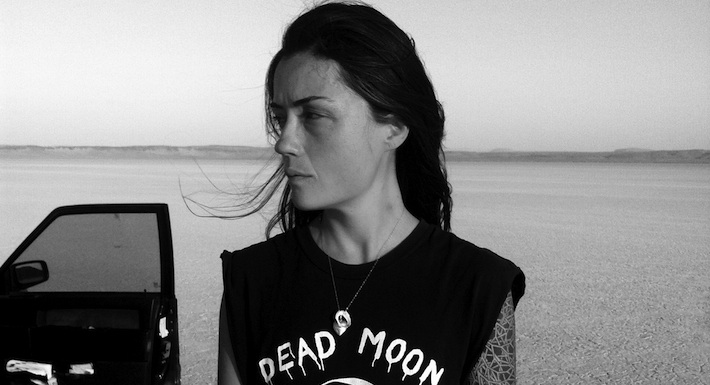 The drawings Liz Harris makes could be mazes. On a website called repeatingpattern.com, she displays four series of visual works: “Divide”, “Repeating Pattern”, “Vessel”, and “Wind Inside”. They are all in black and white, icy, minimal, drawn with firm, intricate line work. Most are abstract. Many repeat themselves in a way that’s almost rhythmic. Some hint at objects, horizons, or architectures. Two pieces take the shape of a single human hand.

Harris may be better known by Grouper, the name she gives to the vocal ambient music she’s made since 2005. Ruins is her tenth album, and it departs significantly from the works that entered Harris’s name into the critical consciousness, 2008’s Dragging a Dead Deer Up a Hill and 2013’s The Man Who Died in His Boat. The covers of those albums show distinct, enigmatic characters, but the figure on Ruins‘ cover stands obscured behind a rain-fogged window. Even the titles suggest an exit: Both of Grouper’s most acclaimed albums hint at dramas in seven words each. Ruins does the same with just one.

Instead of sculpting with guitar and reverb, Harris built Ruins on a piano in a room in Portugal during an arts residency. Her voice is as unmasked as it’s ever been. Her songs are concretely structured around chord progressions. In the lyrics, certain themes recur: the dissolution of a relationship, skepticism about romantic love itself, loneliness, isolation—ruins. “Maybe you were right when you said I’d never been in love,” Harris sings on “Clearing”.

I don’t talk to Harris on the phone for our interview. I don’t even email her directly. I send my questions to her press agent, and a few weeks later he sends me back her answers. I ask about the repetitions that govern both her tightly complex visual work and her looser, more expressive music. “I love to reduce the world to patterns; it’s absurd,” she writes. “Coming up with the raw material for both is instinctive, and describes something moving through me more so than coming from inside of me. My emotions and life events color the shape, but the force is external. The pattern-making comes after the fact. Each piece has to have the correct pattern and framework or it won’t stand up.”

Both Ruins‘ opening track “Made of Metal” and its finale “Made of Air” are about patterns. The first song clocks in at less than two minutes of repetitive percussion filled in by the texture of frogs croaking. The last one sets a piano progression far, far away from the listener, blurring the keystrokes into atmosphere. Harris welcomed accidents and ambience throughout the recording of Ruins; the frogs are a recurring choir, while “Labyrinth” is punctuated by an unexpected beep from a microwave powering back on after a blackout.

“I tend to see most everything—my thoughts, the relationship between different kinds of energy,” Harris writes when I ask if she experiences any kind of overlap between the senses. “If I have a problem I can’t figure out, I look at anything in the world, any object—the ocean, the V in a branch—or process—the tide, cars stopping at a stoplight—and put my issue into the shape. The destination becomes a machine; the machine gives me an answer.”

Maybe its closest cousin in Grouper’s discography is A I A: Alien Observer, one of two 12-inch records she released in 2011. Both position their lyrics closer to the front of the music, and both seem to have been written from a peak of creative loneliness. “Like a lot of people I regularly struggle hard with the feeling that I do not fit anywhere, and yet absolutely need that isolation in order to feel whole and recharged,” says Harris.

Since I discovered it, Grouper’s music has been a place I go when I feel I don’t fit, or when “outsiderness” is something that feels comforting to embrace. Harris releases her album on Halloween, but I don’t think it’s meant as a gimmick or a gesture towards “spookiness.” The end of October, for some reason, tends to be the time of year when I feel most cut out from the fabric of others around me. I know that many of my friends who listen to Grouper associate the music with late fall. It’s a lonely lull in the cycle of collective activity, a time when the sun shrinks and the leaves die and the air becomes hostile. It gets easier to withdraw into yourself in such a way that you fear you might never come back out. Time passes outside of you; the world is something you aren’t really in. Harris’s music feels strongly empathetic to that state. It touches a humanity that plenty of drone music avoids. It embraces the paradox of being just one of countless people who feel like they will never belong.

“Most of the drawings and songs have a kind of doorway or void somewhere in them,” Harris says of her work. Look in her art and you can see it; many of the drawings hold a feeling of crossing over from one state to another. One in particular grips me: the outline of a hand reaching into a puddle of water, grasping at a reflection, an other, touching only the dark and the wet.

Grouper’ Ruins is out October 31 on Kranky.