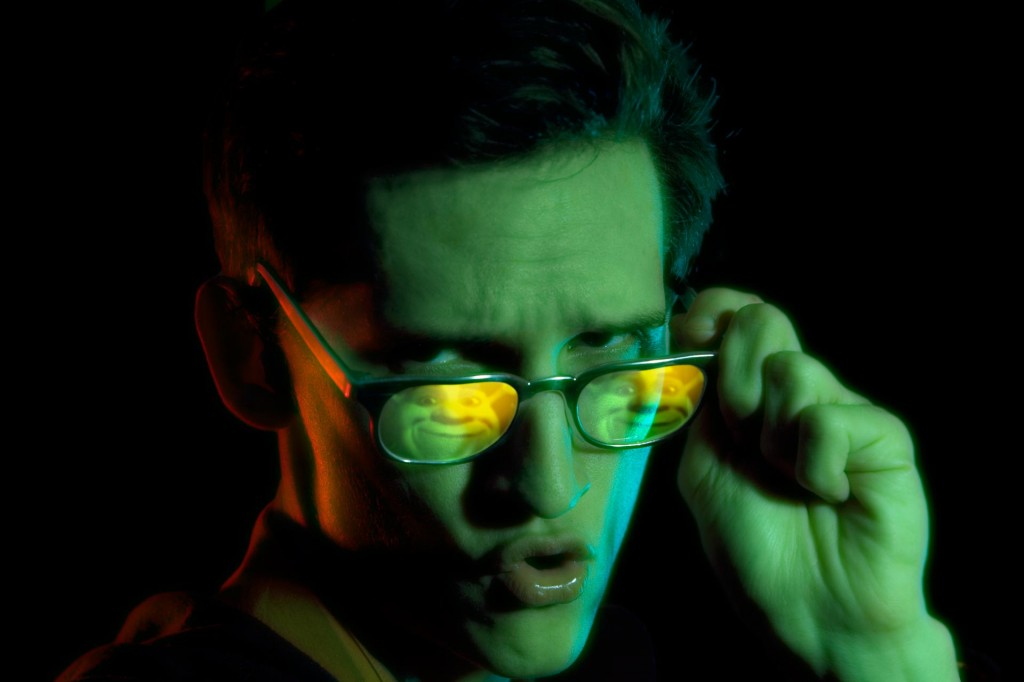 “This is how the world ends. #MouthSounds,” tweeted @gormanate on an early May morning. I’m reading his words inside a widget embedded on the Mouth Sounds homepage, a kind of living liner note that scrolls by in real time. The widget displays every tweet about Neil Cicierega’s first album under his birth name, a 56-minute whirlpool of pop songs and cultural references dissected, mutilated, and smeared back together. The website features a link to .zip files that contain the entire album in either .FLAC or .MP3 format. A bright green SoundCloud widget lets visitors play Mouth Sounds, which Cicierega released last April, as a single, continuous track.

Unleashed on July 20, Mouth Silence—the alleged prequel to Sounds—sits on a similar page on Cicierega’s website. The infamous dancing hamster .GIFs, ranked among the web’s first memes, fade in and out of view below the SoundCloud player. The album’s cover, a pastel-hued photo of its creator with his eyes closed behind thick-rimmed glasses and a finger to his lips, makes up the page’s entire background.

Click “play” on Mouth Sounds and, if you grew up near radios in the United States around the turn of the millennium, you’ll hear an almost impossibly familiar sound—the first syllable of “All Star” by Smash Mouth. “Some.” It plays again—no “body” to complete the word, just “some” shifted to a lower note. It plays again. And again. Eventually, it traces the melodies of “Pictures at an Exhibition” by the 19th century Russian composer Modest Mussorgsky. That infamous whistle solo mingles with the classical composition that everybody knows through ambient exposure but most people probably couldn’t name.

By track two of the record, “Modest Mouth”—a three-way pun on Smash Mouth, Isaac Brock’s indie rock band, and Mussorgsky—Cicierega’s woven “All Star” into the coda of “Float On”, the single that rocketed Modest Mouse into the mainstream in 2004. The songs fit so comfortably together that it’s hard to imagine they were ever sorted into separate taste brackets. The ’90s bro rock cliché and the mid-aughts indie underdog fuse into one pure shot of pop.

If you came of age on the Internet, there’s a good chance you’ve encountered Cicierega’s work in one form or another. He’s the one responsible for Potter Puppet Pals, a gentle video parody of Harry Potter that circulated virally back when the books were still being released. Based in Boston, he also put out “The Ultimate Showdown of Ultimate Destiny” in 2005, a Flash-animated music video set to one of the catchier songs he made under the name Lemon Demon. The song and its video detail a fictional fight for the ages; everyone from Batman to Chuck Norris shows up for the slaughter. It’s an early artifact of mashup culture, a maximalist blend of beloved figures that erupted long before Star Wars characters drawn in the style of Bill Watterson started accumulating tens of thousands of notes on Tumblr.

I’m talking to Cicierega on the phone from his home in Somerville, Massachusetts, and I’m a little surprised that he doesn’t listen to vaporwave. “Mouth Sounds and Mouth Silence are more like YouTube joke videos,” he tells me. “It starts from a place of comedy.” He works outside of music’s avant-garde, but seems to have stumbled independently upon a few of the same aesthetic strategies used by critically acclaimed producers. He’s never heard of Oneohtrix Point Never, the electronic music project of fellow Boston native Daniel Lopatin, but both artists appropriate advertisements in their music for comic and surrealist effect. Lopatin’s 2011 LP Replica stretched vintage ad sounds into alien drones, while last year’s R Plus Seven twisted contextless clips into bubbling, frenetic melodies. Cicierega mostly works with top 40 radio hits, but he kneads a few notable ads into the mix; on Mouth Silence‘s “Best”, he braids the Foo Fighters’ “The Best of You” into the Folgers Coffee jingle.

“There’s a lot of uncharted water with blasphemy in music,” he says, describing the tension you get when you move popular alt-rock and 90s coffee advertising into the same space. “You can either do it with two songs that people don’t like, or songs that they’ve been annoyed with at some point in their life, or you can mix one really goofy song with a song that’s more respected. There’s a lot of different ways to elicit bad reactions.”

One especially bad reaction, according to the listener response on Twitter, tends to come at the middle of Mouth Silence. After a brief ditty that samples a news piece on the mid-’90s Pokémon craze, Cicierega breaks into the music that plays when Simba discovers his dead father’s body in the Lion King. “I almost didn’t do that,” he says, laughing. “I mixed Elton John into ‘Sexual Healing’ first”—the moment segues into a mashup of “Sexual Healing” and “Can You Feel the Love Tonight—”I thought that was funny enough. Then I realized, oh, he’s singing, ‘Wake up, wake up.’ There’s a line in the Lion King where Simba says, ‘Wake up.’ What is that scene? Oh no, it’s the one scene that’s going to make everyone cry. I can’t put that in. But then I did it anyway because if there’s a strong reaction that I suspect is going to happen, I need to go for it.”

Like last decade’s party favorite Girl Talk (the production alias of Gregg Michael Gillis), Cicierega’s music works on a mechanism of constant recognition. But he’s not aiming for the same pleasure centers; while Girl Talk mimics club music in its energy, Sounds and Silence breach moments of humor by inducing total context collapse. Nothing is sacred inside these albums. “Crocodile Rock” slams into System of a Down’s “Chop Suey”; Jimi Hendrix’s “Foxy Lady” lurks alongside Hanson’s “MMMBop” beneath spoken clips of a documentary about furries.

Paradoxically, there’s something comforting about the dissociation the record provokes. Scroll through the tweets about each album and most of them will be either shocked outbursts or gleeful appreciation, often both in the same tweet. These songs feel welcoming not just because their sources are familiar, but because now, in the wake of the internet, cultural dissociation is now familiar. Songs bleed into advertisements and ads bleed right back into songs. SoundCloud and Pandora recommend music based on a machine’s interpretation of our personalities. Our Vine feed seems as likely to show us a quick clip of a live concert as it is bestiality porn or a human being’s actual death. YouTube boils over with things like a person covering “In the Aeroplane Over the Sea” from inside a fursuit. Everything is chaos. It’s no longer possible to tell whether the unexpected music in our headphones is coming from the latest tastemaking blog or a pop-up ad for a cam girl site.

Cicierega’s sister albums wrangle the post-web ouroboros as strangely and deftly as Saint Pepsi, who bent Aretha Franklin’s vocals into the SoundCloud sleeper hit “Mr. Wonderful”, or PC Music, a netlabel known for regurgitating sleek, surreal music cobbled together from discarded advertisements and forgotten pop. Sounds and Silence even share echoes with SOPHIE, the UK-based songwriter whose hyperactive single “Bipp” turned ears across the web last year. But Cicierega doesn’t think of his music in these contexts. “Most of the songs on Mouth Sounds were just things that I uploaded individually to Tumblr as a joke or an experiment,” he says. “I don’t want to think that I’m creating art while I’m creating it.”

It’s the not-artiness of the albums that lends his work a humanistic edge, opening it to a wider audience than PC Music, which can sometimes feel unapproachable and alienating. Unlike the artists behind most web-based subgenres of sampling music, Cicierega attaches his full name and his likeness to his work. He approaches it like a comedian, never raising barriers between himself and his audience but presenting himself as he is. The philosophy behind the video for that Elton John/System of a Down mashup, “Crocodile Chop”, shows he’s not just in this to troll. “While I was editing the video, there’s all these crowd shots of System of a Down fans just losing their shit over watching System of a Down play. But listening to it over this ’50s-style rock song and having it work as a ’50s rock song made me think of fans doing the exact same thing back in the ’50s,” he tells me. “I thought about the common ground. That’s when I realized what the common ground really means for pop music, which is young people and dancing and losing your shit. That was the one emotional moment I had while making the album.”

In some ways, Cicierega seems to embrace the internet’s total flattening of time and space. His music works antithetically to self-serious retro acts like Jack White or Arcade Fire, who have turned their technophobia into lucrative music careers by reaching for an idealized analog past. Mouth Silence and Mouth Sounds force you to consider memory without depth, to think of everything in the past as being equally present thanks to the cloud’s decay-proof archiving. It’s mashup music for the post-temporal listener: singularity pop.

As he watched the initial responses roll in minutes after putting Mouth Silence up on SoundCloud last month, Cicierega witnessed a listener drag the music into a context he hadn’t even considered. “When it first dropped, I watched all these people listening to it and tweeting about it in real time,” he tells me. “They were all hitting the same points at the same time. I love seeing all that stuff, and hearing people’s first reactions. But it was all text. And I noticed one person was like, ‘I’m going to stream myself listening it on video.’ And I was like, that seems cool, I want to watch a person’s face as they listen to it. So I clicked on it and she turned out to be a cam girl. It was just this young woman on one of these cam girl websites where you get donations or points, like, give me 50 points and I’ll show my butt. But she wasn’t trying to do that stuff. She was just listening to the album and reacting. I was like, this is so cool. And then 20 minutes into it someone gave her 50 points and she showed her butt while the music was playing. That was the first time I watched someone listening to the album. It was like, okay, even if you’re trying to be sexy for strangers in a chat room, you’re still laughing at this music and being confused by it. That was the coolest reaction I saw.”