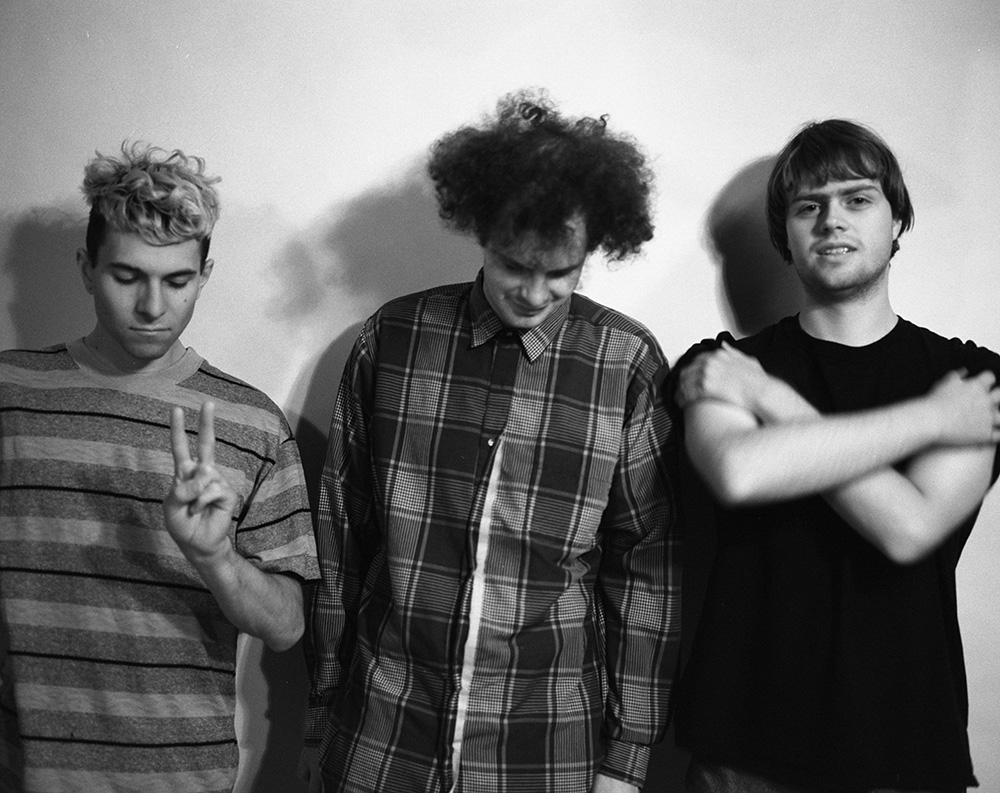 “I feel like if you put that in the interview I’ll just sound like an insane dude.”

Travis Coster tells me this after unleashing an off-the-record rant about the lack of identity that seems to follow him and his band Naomi Punk from show to show, town to town, and interview to interview. Far from an insane dude, Travis is actually a very personable guy who drove to an abandoned hardware store just to get cell service to take my call. He answers my questions deliberately, carefully and thoughtfully in fear of being taken out of context. “I think our band has a really bad reputation of being a bad sport at answering questions,” he explains while searching for the right words.

Being taken out of context is a common occurrence for Travis. As “arty” or “weird” or whatever other generic term music critics like to lump Naomi Punk into, their name summarizes their aesthetic as well as anyone can. They are a band who should be taken quite literally: Punk that transcends gender. Though the name might have come from a sarcastic look at the genre and what has become of it, the way Naomi Punk live and perform is by the very definition of the word, punk.

But Naomi Punk doesn’t wax the typical political tropes of traditional punk bands. Coster’s lyrics are deeply introspective and reflective of the geographical area they grew up in. The Pacific Northwest might be most noted as the area that spawned grunge, but you’d be hard-pressed to find anyone who’d argue that Bikini Kill and Riot Grrrl might have been the most impactful of that punk generation. And as the feminist movement was not lost on Kurt Cobain, nor is it lost on Coster.

“What we’re a product of is more timeless, enduring features of a counter-counter punk philosophical approach to making art. That’s why our band name matters to me,” Coster says.

The name, of course, is female. And for a band made up of three dudes; Travis, guitarist Neil Gregerson and drummer Nic Luempert—like everything Naomi Punk does—it’s an important artist statement.

“I felt like I was harnessing a lot of inner energy and working things out, but I feel like looking at myself as a woman from the outside, I guess its just a different vantage point that I’ve tried to harness and explore,” Carter replies when pressed about singing from the first-person perspective of a female. “It’s not super political, but I feel like it’s political for my personal growth as a human being.”

Though Travis is sure-footed in his delivery, he seems shy when answering this question specifically. I tell him I won’t press on, despite my piqued curiosity, noting the personal nature of the subject.

“It is personal. And It’s cool. I feel really good about how I find a way to say things on the subject of looking at gender in a critical but personal light; uncovering a more expansive truth about what I’m singing about.”

“Yeah, I guess it is kind of personal.”

is a different beast than the traditions of alternative college rock we might think of it. Economically depressed and living in the shadow of Seattle (fondly referred to as “the North” by locals), Olympia “is kind of its own vortex and slightly gnarly,” Coster says endearingly. As much of a pigeon hole it might be for some bands who reference ’90s rock, imagine living under its oppressive shadow all the time. As Jamie Peck correctly summarized, Naomi Punk is “born of the great Pacific Northwest punk rock tradition and consciously divorced from it,” and it’s when describing the current navel-gazing scene where Travis suggests he probably is being a dick.

“Olympia is fucking the sickest shit,” he says proudly. “A lot of people in Olympia are skeptical of people peddling bullshit. That’s sort of the trend, and it’s a really cool aspect of Olympia; that some band like Surfer Blood can’t just walk in and charm a bunch of high school students. It’s like, ‘No, no one goes to that show. Sorry.’ There’s definitely a skepticism. I think there’s more identity politics involved with that.”

Some band like Surfer Blood can’t just walk in and charm a bunch of high school students. It’s like, ‘No, no one goes to that show. Sorry.’

Identity politics implies having your own identity, or at least connecting to those of the people you surround yourself with. This leads Travis to discuss what he finds so troubling about a current musical landscape that is constantly looking backwards. If you’re not adding anything new, why the fuck do it? I bring up the idea that even a band like Nirvana, who, as he admits, “you kind of can’t fuck with,” was ultimately a major label band—much like those being constantly referenced by today’s independent artists.

“I recognize their hilarious position in music history. It just makes it funny to even talk about it. I really think that Kurt Cobain entered so much interesting material, from a conceptual perspective; being basically the most mainstream bullshit possible, and being even vaguely arty and weirdo—even if they were hollow signifiers—I thought it was cool,” he says before clarifying. “But that masculine, hetero ’90’s rock vibe where every suburban kid got into the idea of being angst, I’m not into that.”

“I don’t find it an aspiring source material for making new art or music at all.”

Whether a source of inspiration or not,

there is a certain parallel that Naomi Punk does make with Nirvana, and that is through the repetition in sound. In fact, evidence may suggest they take more inspiration from themselves than any outside source. As someone who’s delved in to their albums more than a few times, I was quick to point out that many of the songs on their newest LP, Television Man, sound awfully similar to The Feeling, their first for Captured Tracks. A quick e-mail at the time to Travis was met with the response of, “”Rape Me” vs “Smells Like Teen Spirit”.” True, those songs share the same chords, but in the case of “Television Man” and “Trash World” specifically, it seemed like a mere tempo change was all that separated the two. Travis likened it to art, and perfecting his medium.

“We play “TV” and “Trash World” back-to-back at a lot of shows. When I’m playing them I don’t think of them being the same song at all, they’re kind of like exploring different subject matter for me… I feel like were exploring a slightly different space than we were on the last record. Like, we’re using the same methodology to explore; trying to find pop music, but from a different prospective.”

I joked that maybe it was to see if his label or music critics were paying attention. “I mean we thought that it was a funny idea,” Travis starts, “But it would be a waste of time to make a joke about music journalism or music being shitty, because I don’t think we need to point that out to anyone. It’s already pretty apparent.”

is a mantra I’ve been hearing my entire life. Chastised for taking punk to pop, the faster anarchistic music had fallen out of favor and replaced with the grunge-loving, slacker vibe of the ’90s. We still cared, but we cared in a slightly less aggressive manner. Then Bush happened. Then Katrina happened. Then two wars happened. Then Sandy Hook happened. Citizens United, Ferguson, GMOs, tax breaks for tax-dodging corporations… point is there’s enough source material for Billy Joel to sing five or six more “We Didn’t Start The Fire”s. So where is punk?

“The spirit of the way that people are approaching art being made in my immediate vicinity is disorienting and troubling to me,” Coster says. “They are looking at niche culture as being this mainstream thing they need to be a part of. I’m bummed when young kids come to a show just to network with us, to ask us if we can put in a “good word” for them [with Captured Tracks]. I’m like, ‘What the fuck? Do you even know why I make music?'”

Of course, the question is rhetorical. Coster may be unsure of his interview abilities, but he knows exactly what his music stands for and is quick to answer himself. “It’s pretty much the opposite reason why you wanna make music.”

If our discussion about gender roles, and specifically his voice in the conversation, helped explain the Naomi, then I would offer this as his explanation of Punk:

“Maybe if you did something the opposite of why you are currently trying to make music then maybe you could find some freedom and truth in that and it can be beautiful for you, and then it won’t matter if it isn’t in record stores or on a label, and you’ll realize it’s beautiful that way. And then maybe if you do that, you’ll get some other people that will honor your effort in making art your own way.”

“That is another chapter in finding transcendence through art—finding an audience in a more authentic way.”

“Authentic” is an adjective I’d like to suggest people use when describing Naomi Punk.

PrevPreviousOnly assholes cook for themselves by Stephen Tanner of Music Blues
NextFond Memories of a Traveler: Chris Child on Japan and KoreaNext