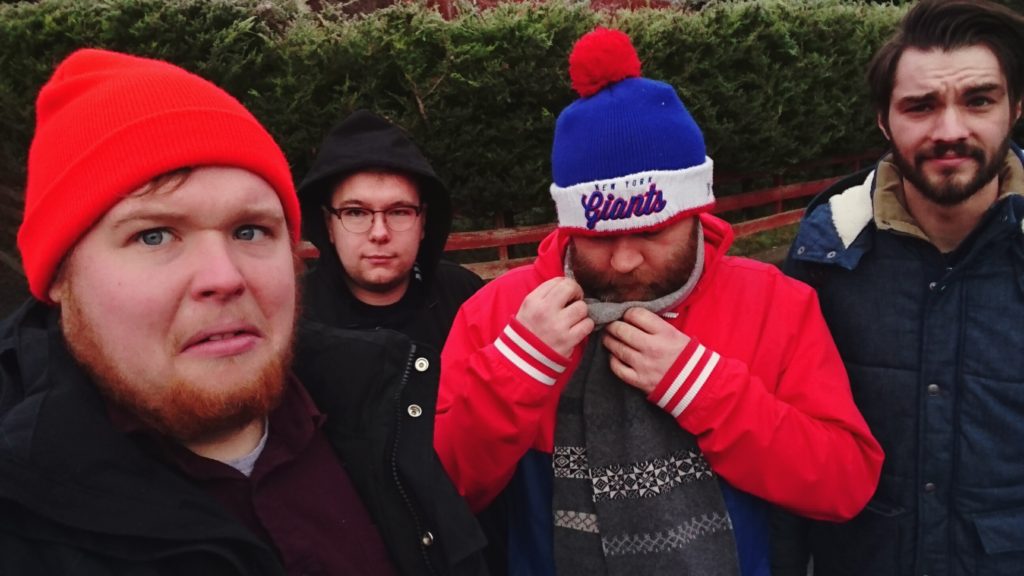 The Pooches are an indie-pop band out of Glasgow, and they’re ready to take the world by storm. The band began as a solo project by vocalist/guitarist/songwriter James Hindle back in 2013, and has snowballed into the incredibly fun 4-piece band that it is now. The biggest resemblance we can find? Perhaps a younger – far less jaded and much more rock n’ roll with a twinge of beachy vibes – Fountains of Wayne.

Their debut EP was release just this year, and though their self-titled album will be released via Lame-O records on September 9th, we’ve got a taste of their latest track – “New Years” – on repeat over here at IMPOSE. Find it below. (Might we suggest sipping from a tall, iced beverage while enjoying this refreshing, summery pop track?)

We caught up with Hindle to learn more about the upcoming release.

So tell me about how The Pooches came to be.

I played music for years on my own. There was also another earlier incarnation of The Pooches called ‘Water Wolves’. We played a lot of great shows with bands like Real Estate, Wavves etc. but it just kind of fizzled out and we never recorded a note of music the two years we were together. After feeling a bit defeated for a couple of years, in the summer of 2013 I realized iI had been writing a handful of songs that seemed kinda different from what I had done before. I took to recording them at home, and before I knew it I had almost 50 finished songs. Figured I probably should do something with them.

Initially the songs were all kind of silly, lyrically, with a couple of them being about dogs i had seen around Glasgow. The name ‘The Pooches’ just seemed to fit for this new project. I was amazed nobody had already used it! After putting the album out on tape on a local Glasgow label, I got asked to play a couple of shows. So I asked a couple of friends to play and we practiced a couple of times, played a show and the realized I suddenly had a new band. After a couple of line up changes and a couple more shows, the now 4 piece Pooches was born. A chance meeting with our now friends Modern Baseball led to us signing to Lame-O Records, after their bassist – and all round awesome dude, Ian – played our music to them.

You have a record coming out soon. What was it like creating it?

It was really fun. We did it over a number of weekend sessions with our friend Chris Mccrory, who plays in a great Glasgow band called Catholic Action. We had played with them and had heard some of the stuff he had recorded with other bands on the scene here and he has great taste in music; he seemed like a great fit for us to work with. We didn’t really start with an album in mind but then I realized I had a written a batch of songs that all had the same kinda theme and told the same story. So we focused on those, with the view of it being a cohesive album…albeit a very short one! I like to think of it as the indie-pop version of Frank Sinatra’s ‘@atertown’ album! At least, that was the vague plan haha.

Did you encounter any challenges?

The only real challenges were the gaps in between the sessions. Sometimes it would be a few months between, with folks having jobs and other bands – our drummer Calvin is in the amazing Glasgow hardcore band Anxiety – it was hard to get everyone available to go record. But in terms of the actual recording itself, it was pretty plain sailing. Chris was mellow and receptive and everyone got on super well and we worked really fast. Would have been nice to have may had slightly longer, but once we had signed to Lame-o Records and had an actual deadline to finish it by, we had to hurry to get it all mixed in time!

Your single “Mulligan” is awesome. What was the process behind it?

Thanks! “Mulligan” was the last of that series of songs I wrote and is probably the one I like the most. I had been trying to come up with a name for it for ages, but then I had a flash of inspiration – and this will make me sound like a total nerd – after playing Magic the Gathering with my friend one day. In Magic, a Mulligan is when you take the cards you are initially dealt and swap them out; essentially a second chance. It seemed like a nice metaphor for what the song was about.

What are you most excited for after the album releases?

I think I am more nervous than excited! Well, I am excited too. It is just really amazing to be on such a great label, with such supportive folks running it who really like the band and seem so enthusiastic about us and the record. I am hoping people like it and respond well to it. It’s quite an unassuming record, but I am really proud of it! I am also hoping it leads to us being able to tour outside of Scotland, and maybe over to the US at some point. we have only played once outside of Glasgow, which was opening for Modern Baseball in Manchester. It was so much fun!

Who/what are your main inspirations for the band?

Different inspirations for different aspects of it. I think the whole Burger Records/Gnar Tapes scene was my first inspiration for starting to write Pooches songs, as it all seemed so fun and DIY and accessible to me. My only ambition for the project when I started it was to release a tape on one of those labels, and we actually got to do that with our first EP coming out on Gnar Tapes, so that was exciting.

Musically, in the broader sense we just wanted to make short, catchy, heartfelt little songs. Try and keep them all around the 2/3 minute mark. I was listening to a lot of old hardcore stuff at the time, too; Minor Threat, Descendants, all the Lookout Records stuff, along with 70s power-pop bands like Shoes, Any Trouble etc. Fountains of Wayne were a big influence, too. They tend to get dismissed a lot as one hit wonders, but they have so many amazing songs! Also, The Pastels…the best band ever from Glasgow, in my opinion. They have been an inspiration to me ever since i was a teenager in their music, aesthetic and general vibe. They are lovely people, too!

If you were a helmet, what would you look like?

Hmm I would probably be a big shiny green helmet with a sad face on it. I am not sure why, but it just seems like a good fit.

Who is your favorite Disney character and why?

I am not the biggest Disney aficionado, but probably a tie between Goofy and Droopy, as they best encapsulate me as a person; an affable, lazy goofball haha. I am more of a Peanuts man..and if i had to choose a Peanuts character, it would definitely be Linus.

What’s up next for The Pooches?

Just getting ready for the record coming out! And hopefully getting to go on tour at some point next year. We have probably half the songs ready for another record already, so I am hoping we can start to work on that soon, too.

The Pooches is out September 9th via Lame-O Records. Reserve your physical or digital copy now.