The ridiculousness of being Viet Cong 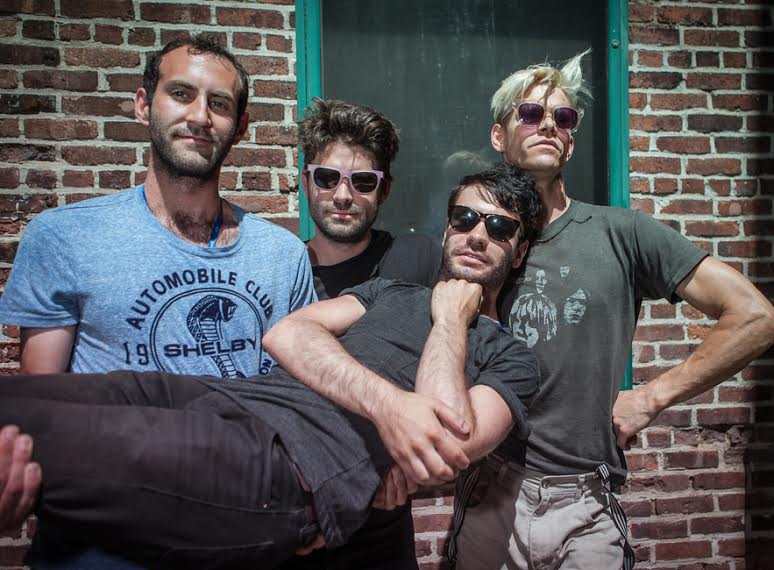 Locked in a cramped, windowless cubicle with Viet Cong is thankfully not half as bad as it sounds. Outside, Manhattan’s 4Knots Festival is raging in the hot summer sun; inside, things are just as sweaty (the festival is free so air conditioning, it seems, is not in the budget.) Toiling away in the stagnant air, I’m shooting the shit with Matt Flegel and Monty Munro of Viet Cong, learning a lot about first impressions in the process.

Like many burgeoning buzz bands, a story follows Viet Cong wherever they go. In this case, it’s that of former Calgary band Women, and the unexpected death of guitarist Christopher Reimer in 2012, two years after they disbanded. Both Flegel and Viet Cong drummer Mike Wallace played in Women, and after enlisting Munro and Danny Christiansen, a new band was formed from the ashes.

So much press has been dedicated to these events—the aforementioned tragedy, in particular—that I almost feel it’s smart to avoid them altogether. Still, there’s a mystery that surrounds Viet Cong, and it needs cracking. Like all the best tales, theirs was fostered by the Internet: the band’s macabre roots, bleak subject matter, and fiercely impressive, enigmatically titled debut LP.

Unfortunately, there isn’t really time for all that.

Instead, our brief chat centers around such diverse topics as work, touring and dildos—the vibrating kind, naturally. “I was really worried you guys might not be chill,” I say, fanning myself with my laminated press pass. They laugh. “We’re not serious at all,” Munro assures me. He’s perched atop an office counter sporting a black Freak Heat Waves t-shirt. “We’re rarely on the ball.”

“Rarely on the ball” just doesn’t seem an apt description for Viet Cong, especially after repeat listens of the band’s first release, Cassette. The “mixtape”-esque collection features seven tracks that are not necessarily the most cohesive, but thoroughly effortless in the way they drift from sound to sound, influence to influence. If the order feels random, it’s for good reason; as Munro and Flegel admit, there wasn’t much of a plan going in. “We were on tour with Chad VanGaalen, and we knew that when we got back, we were gonna start a band,” Munro explains. “Matt had some songs, I had some songs, and we were like, ‘Okay, let’s just start putting something together.’”

Over thirty compelling minutes, the tracks on Cassette seem to follow the trajectory of life, starting with candid optimism and eventually spiraling down, achieving an austere outlook. Opener “Throw It Away” sets the stage for tight, psychedelic tinged post-punk, quickly transitioning to groovy beats and smoother, brighter compositions like “Unconscious Melody”. On the latter, Flegel states, “I often get the feeling I don’t have any sensation / It isn’t much of a feeling.” Later, he’s harboring that searing desire of wanting someone you know that you shouldn’t (“I can only carry you so far,” he admits on the disarmingly pretty/sad “Oxygen Feed”). After hitting the hazy “Static Wall”, a shift occurs; droning texture builds and rhythms become darker, stormier, more predictable. To say that the rest is noise isn’t meant as derogatory. In fact, just the opposite.

“We took the seven songs we thought were the best, then put them together as a mixtape,” Flegel adds from the peculiar cushion of his beanbag chair. On recordings, his deep voice is distant, shrouded in layers of intermingling melody. In person, he’s funny, and all-too eager to discuss what makes his new band tick.

Digging deep with Viet Cong—at least, as deep as the fifteen minutes allotted for our interview would allow—was an amusing, if not abrupt, experience.

Why give an LP the title Cassette?

Monty Munro: We self-released [the LP] on cassette so that we’d have something to sell on tour. We were touring with Freak Heat Waves and they were always like, ‘Just sold some records on our Bandcamp last night,’ and we were like, ‘Oh man, Bandcamp sounds like a good thing to have.’

I set up our Bandcamp and for title, I didn’t really think about it, so I entered Cassette. Someone emailed us and asked, ‘Is it called Cassette because it’s actually a cassette, or is that the title?’ And we were like, ‘It’s called Cassette!’

So the title was not intentional.

Munro: No, definitely not.

What about the name Viet Cong—was that intentional?

Matt Flegel: That comes from our drummer, and from us being teenagers and watching movies. The Viet Cong were always the bad asses in movies. We are getting a lot of shit for the band name—it’s fairly controversial. I’ve looked into it a bit more since then, but I didn’t really know the history of it. [The Viet Cong] did terrible things, but so did the American military.

Munro: I feel like calling [the band] ‘The U.S. Marines’ wouldn’t be controversial here in the same way.

Flegel: Also, it’s just a band name for us.

Munro: We didn’t mean it to be offensive to anyone. But we do understand… I’m not gonna be indignant if someone’s upset about it.

Have you ever been confronted about the name?

Munro: We’ve gotten some emails that were pretty crazy. It’s emails and YouTube comments, and that’s really the extent of it. Or we’ll just get shot on stage by some rogue renegades and that’ll be pretty crazy, too.

That’ll make for a good feature.

Flegel: It will. It’s too hot out today for our bullet proof vests. We left them in the van.

What does Viet Cong do as far as day jobs?

Munro: Danny, our other guitar player, works as an architectural technologist. I deliver cupcakes.

Flegel: I work as a painter, Mike runs a painting company, and I just quit my other job. I was working for my dad at a flooring company and it was wrecking my hands.

Is it challenging to balance day jobs with making music?

Flegel: Nah, we make it work.

Munro: We all just kind of odd-job our way through it.

Flegel: I feel like it’s a lot less stressful being a band in a smaller city. I can’t imagine coming [to New York], having to sort out a jam space, rent it by the hour, not having your own gear, and your own space that you can just go to. We all have houses with basements. Everything is there.

Munro: It makes me feel good that in like, ten or fifteen minutes, we’re gonna just walk out of this office and not work here. It’s nice to have a little reminder of what other people do with their lives.

Impose published a really great review of Cassette, with some great thoughts on existentialism. Were these the sort of ideas you had while creating the record?

Flegel: I don’t know if you can even understand the lyrics on that record—I don’t remember what it sounds like anymore—but that’s mostly what I’m singing about. The ridiculousness of being.

In a bleak way?

Flegel: Not really bleak. [The record] gets bleak, but I think it’s also funny. That’s how I think of things. We’re all very small, and I think it’s funny that people take things really seriously sometimes.

What inspired you to essentially split Cassette into two sections: sort of a pop sound and then a drone sound?

Flegel: I don’t know if it was intentional. I really like pop music, and at that time we weren’t really a band, it was mostly just me and Monty messing around in his basement, recording things, trying instruments out that we didn’t really know how to play.

Flegel: Yeah. It was really just us messing around. We didn’t have a direction to go in, we were just doing it.

Munro: We recorded maybe like 15 or 20 songs. Then, when it came time to do that tour with Freak Heat Waves, we needed something to sell, so we kind of just threw a sequence together.

I mean, did you just have one lying around? Or is that too personal.

Then, we were playing in an indie pop band that was touring the U.K. We got to talking to this one guy at a venue about this, somehow, and he was like, ‘You know this venue used to be a sex shop, and all the old stuff is upstairs. Do you wanna take anything?’ And we were like, ‘Fuck yes!’