Andrew Bird at the Music Hall in Portsmouth, NH

With the outlandish phonograph horns on stage inside the refurbished grandeur of The Music Hall in Portsmouth, New Hampshire, one could sense that this would be a different concert experience. Everyone sat down quietly as if waiting for a string quartet or pianist to indulge our senses in the dulcet tones of some high brow concert music. Although Andrew Bird’s performance engendered some tavernous, raucous cheering, this quietude wasn’t completely assuaged. The few, feeble attempts by die-hards to engage in down-home-at-the-state-fair handclaps were squelched immediately, in favor of an adulatory reverence for the musical experience (or, the fact that we were sitting down in a lavish concert hall without double-fisting PBRs).

Andrew Bird’s music provides an enigma in the current rock world. On one hand you have his roots, with Bowl of Fire, as the anachronistic jumble of folksy vaudeville, swing era jazz and Southern bluegrass. On the other, (his contemporary style) is this sardonically clever satire on apocalyptic events (i.e. “Scythian Empire”—which he did not play) that is rooted in an amalgam of prog rock and classical minimalism. Yet through this broad swath of musical Americana, Bird whistles, fiddles and narrates musical drama that is engaging, ironic and at times disarming.

The show featured some new tunes, “Natural Disaster” and “Waterjet,” which will be a part of his upcoming release Noble Beast. (He announced that he just finished the mastering in Boston and to look for it in January). His dramatic flair and penchant for theatrics came across well during “Damn You for Being so Easy Going.” Another highlight of the show was the story behind “Spare-Ohs.” Several fans and critics have considered this song to be a description of nuclear fall-out (which coincides with the dystopian theme ubiquitous in Armchair Apocrypha). Rather, it is the story of his personal chicken collection gone awry through coyotes and raccoons getting to the chickens and the remaining feathers floating throughout the countryside, getting in “your hair.” Instead of nuclear winter, it was dead-chicken spring.

As a solo act it had its accompanying issues (technical and performative). There was a certain point in the concert where the instrumental looping became a bit tiresome. This is a difficult aspect of the music. The solo style with the spinning phonographs and constant instrumental changing kept the attention away from the inherent musical problems. However, the redundancy of loops begged for variety that never came—just layers and layers of the same music. Despite the resultant rhythmic complexities and rich orchestration, there lacked the interactive and dynamic experience of each instrumental line changing and evolving, which without other players present, remained static and predictable. But these problems are to be expected when a solo player tries to be the whole band.

Although this weakness pervaded the concert, Andrew Bird’s energy and earnestness rapt the audience’s attention. Such a show would not work in the club. It demands far too much attention and requires us to listen and engage with the material in an active way. I wonder how many other bands could benefit by presenting their music outside of the rock club. 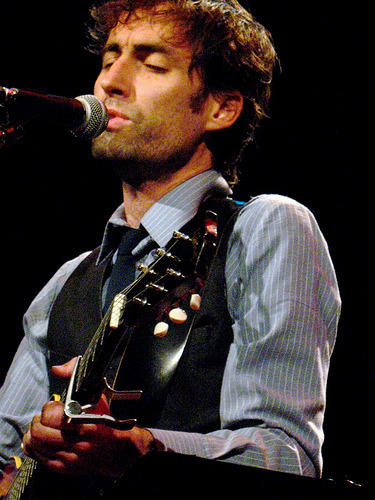