If George Clinton is captain of the Mothership Connection, and Paul Kantner the commander of Jefferson Starship, then Zach Condon must be skipper of a much more terrestrial sloop. I would say he’s some sort of gondolier, but I think you have to be a native Venetian for that, so I will say that he could also be pin-striped and top-hatted in a clawfoot bathtub in Montmartre. But forget about the Old World for a second because tonight the schooner La bohème sailed over seas of cobalt craypaper and tawny corduroy kelp, under a Crayon firmament and through an orange felt Golden Gate to dock in the welcoming arms of the Herbst Theatre.

The last time I was here there were far fewer scarves, fedoras, feathers, facial hairs, beads, purple things-certainly much less purple last time. The last time I was here I wouldn’t have imagined such a lively and colorfully adorned ecosystem possible in such an austere setting. But then again, there are these gargantuan velvet curtains and gaudy twenty-five foot tall murals depicting our trials and tribulations, and Beirut’s music does span a few centuries, continents, and genres. So it’s not, in the end, surprising to find them here.

Which brings me to the question that has been baffling me for sometime: how is there space for this music in the spotlight of mainstream pop-culture? I mean, there are fewer pedals than pickups, the songs are separated by bouts of tuning rather than feedback, the guy next to me knew what a euphonium is, and the stage is wet with spittle from spitvalves. And still, the music manages to appeal to the populus. And to the loins of the populus.

One thing about concert hall acoustics is that the audience is forced to listen reverently and frown on the crinkling of a cough-drop wrapper. Tonight, it seemed that every song break was permeated with libido: “I love you, Paul. Zach, have my baby- you’re so hot. Owwww. Zach, you’re so hot, you’re so fucking hot.”

“Only in California, baby.” was the reply.

And it was hot. When they busted out the “hottest dance song since 1765”, seats were vacated, aisles filled with girthy bohemian-conga lines (Allemande lines?). The space was pretty restrictive with regards to ass-shaking, but I don’t think it’s entirely clear how to dance to this music anyway; I think it’s fair to say that the people got down. I have a feeling that, if you consulted the records, you would find that more babies were conceived this night amongst Herbst Theatre patrons than any other night in the theatre’s existence.

At any rate, it wasn’t raining before the show and it may have started raining during the show because it was certainly raining afterwards- and blessedly so because San Francisco needed a bath. 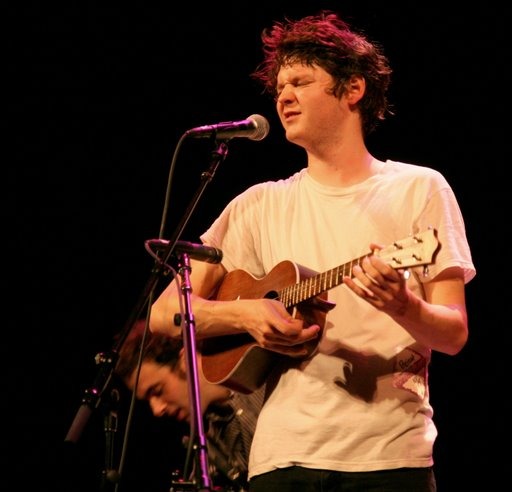 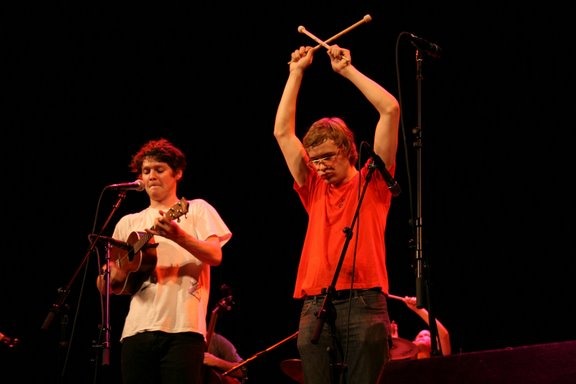 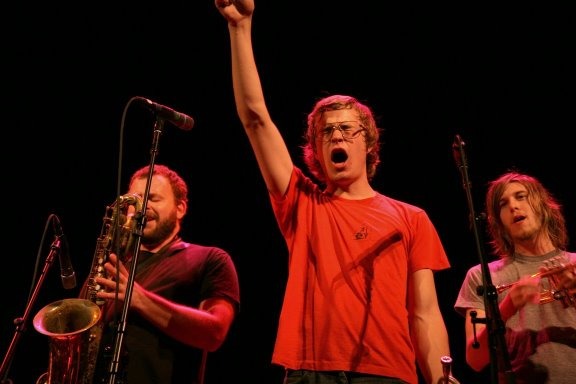 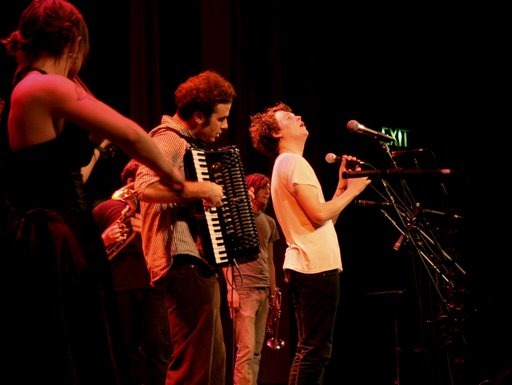 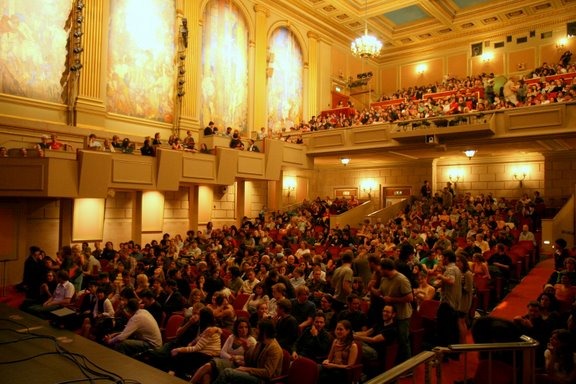