Scanning the audience Wednesday evening at Brooklyn’s Monkey Town, I made the curious observation that I may easily have been the youngest person in the room. I’m 23, yet I would have estimated the mean attendee age at least a decade older. This makes sense—after all, we were there to see a musician who hit the scene a good 35 years ago. The 75-or-so thirty-somethings crowded into the cubical showspace seemed too young to have been into the Kraut-rock thing when it first came around; they are likely the ones to have caught it during its mid-1990s resurgence.

Scattered among this crowd were more than a few au courant art-rock musicians; I spotted members of Gang Gang Dance, Animal Collective, and Growing, among others. A handful of them could be found on stage, assuming the role of Damo Suzuki’s backing band for the evening. A part of his “never ending tour,” the former Can frontman travels from city-to-city inviting local talent to jam with him. In this case, the band was comprised of members of Gang Gang Dance, Excepter, Psychic Ills, White Magic, and Soft Circle, each of whom made great offerings to the combined sound.

It would seem there is no upper bound on cooks for this kitchen. This is a supergroup I would’ve paid $13 to see regardless of whether or not Damo Suzuki was at the mic. That such a figure in the history of experimental music was involved bumped the evening’s grade from an A- to an A. At 55, he is just as charismatic as ever. Grasping closely to his microphone stand, Suzuki spent the evening unleashing a barrage of sing-speak in some unintelligible combination of English, Japanese, German, and/or non-language sounds.

Upon taking the stage, this makeshift freak-out septet kicked it into high gear. As textures of keys, electronics, and percussive clang merged with pulsating bass and trickles of delay-enriched guitar, drummers Hisham Bharoocha and Jesse Lee kept things moving forward. The former percussionist may have stolen the show; the set was dominated by drums, not unlike the Can records on which Suzuki appears. Bharoocha has some familiarity working with avant-rock heavyweights—he acted as music director and organizer of this past summer’s wildly successful 77 Boadrum event.

The performance consisted of one continuous 90-minute set, broken into several phrases. The seven musicians began by meandering about their instruments until a groove materialized. Bharoocha dropped the beat, and the sound grew as the other six slowly settled into place. This phrase swelled until it exhausted itself. The drumming shifted to asynchronous tapping, and the meandering began again. They approached a new groove, until it too ran out of steam. This pattern continued throughout the night.

Damo Suzuki, combined with his backing band and a collection of early avant-garde cinema, captivated the audience for the duration. After a fantastic 90 minutes of otherworldly music, Damo hushed his band with a gesture. A burst of applause escaped the crowd in appreciation of the intimate once-in-a-lifetime performance. I certainly hope someone bootlegged it. 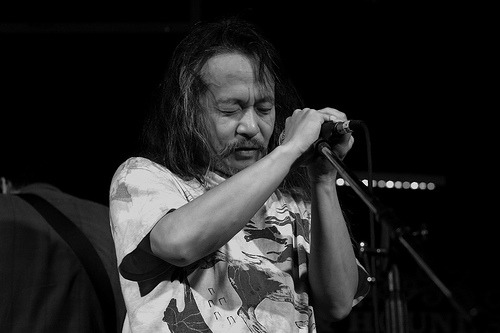