One more July 4 tale, transmitted from across the pond and in a basement.

Independence day in Berlin is not your regular barbecue. Say hi to Kindl Brauerei, a stern church-ish structure with a defunct brewery. This place played shrine to Uncle Sam’s b-day, along with many obliging bands, activities, and a cosmonaut, all lending the celebration a poignantly perverse take on an American affair. And since we are speaking about Berlin, it reminded most of the Americans on this heartfelt holiday that it was the Russians that went first, not us.

Upon entrance, Americans and Berliners were met with a trumpeted National Anthem on their way down the slowly winding stairwell ripe with hanging chains and other industrial debris. The basement gallery greeted guests with Coca Cola flags and promises of Chinese occupation. These declarations of art were happily drawn on shredded cloth and splattered with a heaping helping of day-glo and electrical tape. Flag making workshops, followed by flag burnings, a plastic pool, and Germans playing beside Americans playing almost everything under warped flags provided some major fireworks for the night.

4th of July or not, one thing to remember about this scene is that Berlin is certainly not Brooklyn, or L.A., or San Francisco, or even Baltimore, for that matter. Low Brow basements tinged with High Brow theatrics during noise sets, carefully constructed costumes, and improvisational soapboxes with LSDJ 8-bit visuals in the background led me to a couple conclusions:

Firework #1: Berlin is NOT Brooklyn, L.A., San Francisco, or even Baltimore, for that matter.
Firework #2: Dance music in between noise sets that echo the dance music people bump too? Refreshing.
Firework #3: Berliners bust a move to anything, even silent guitar pedal blips.

Here are some more amazing declarations of independence to be found at Kindl Brauerei and coming on tour near you:

Harmonica tests guitar while guitar tests gravity. Layback and Think of England is the brainchild of JEN, who hails from Queens. She played only one song but managed to rivet the crowd to silence. Her compositions are glassy, shimmery, and guttural. It’s not for the faint of heart, but if you have one it will give it some grit. She sits on the floor instead of a chair, with guitar sitting on her lap sitar-style. The harmonica acts as a violin bow to make for some killer screech and heavy soundscape.

Alien riffs, enlightened theatrics, serious black magic, major echo, and body slamming were well in order for Ze People Og Kohr. Gyorg and Fritz hail from Berlin and have no problem grabbing brain cells, converging atonal bass and guitar lines, and throwing them into the trance-dance-neon-kraut rock cauldron. This meat grinder of psych is tinged with industrial, and some pretty blatant humor. There’s a slight math rock quality going down a heady black hole from time to time that drills the music onward. Still, it’s not so metal, industrial, and psych that it takes itself horribly seriously: Fritz has theatrics that are Oscar-worthy while Gyorg balances the physics of it all. The set was sweaty, jumpy, and completely plugged into the firework zone.

Sorry, chiptune scene of New York, you just aren’t ready for this. Berlin is, was, and will be. Jeff Donaldson is the reigning innovator and dark prince of the 8-bit/chiptune scene, bar none. In New York, most of his peers don’t know how to categorize him. Well, that’s good for Berlin. Any chiptuner who can go from providing LSDJ visuals and playing gameboys beside psych rock and noise bands while holding his own has rare, spot on chops. In a scene as rarified with rules as the New York chiptune/8-bit scene, this guy blew the audience away as a true original. Notendo’s music is not cheesy, derivative, nor nostalgic. This isn’t caustic, happy-go-lucky blip fun. It’s seriously thought out dance-noise with meat on its bones. His visuals were displayed on (gasp!) not a projector but on the whole stage during every set. They made for some serious three-dimensional glitch spasms. Makes you rethink the flatness of a projector as the backdrop for a band. Why not just splay it all over the bands face? He was the pride of this American holiday night.

When Brian Von Suba of Macaco Mau was getting his gear set up, it was pretty surprising not to see lizards and other creatures squirming around his pedals, old synths, and switchboards. This lone fighter, twister, and zinger of all things noise and ambient was the Mr. Wizard of jungle-apocalypse noise for the night. Slight elements of newsreels, propaganda noise, hip hop, rave, and clangy funk drums provided a constant invitation to the audience to dance out. There was no irony here, no self indulgence, and no dead pan. Macaco Mau’s music is militant, well-rehearsed, and grabs by the neck. It commands total body movement. If Brooklyn and Berlin had a noise love child it would be Macaco Mau. Rave-noise is the new infatuation of Berlin. So get ready; this new export will be unfolding stateside soon.

Tim and Swift don’t make it easy. In fact, they made just about every American or Brooklynite homesick. This band is distinct. Distinctly in your face, unapologetically gruesome, and outrageous in the “just wiped out off the skate board and gashed knee” sort of way. Swift’s polyrhythmic drums behind or in front of Tim’s wailing and meat bone bass swagger threw everyone’s ears up against the wall. Why no one’s heard hide-nor-hair from this band in Brooklyn is beyond the moon. Think biceps, high-end head thrashing, and major flexing. Their songs are motorcycle gang versions of No Wave metal. They even managed to blurt out a Wire cover. This band made every vegetarian in the audience go meat eater.

Anywhere Terrible Eagle plays in the world, El Topo is there. Or Holy Mountain. Or ghosts. These members of Indian Jewelry branched off to produce a killer shamanic beat driven cult-classic noise scape. No amount of beer, hash, or peyote can produce the sobering experience that is watching Brandon and Ken get into it side by side. Drone guitars, exasperated keyboard swells, and carefully constructed minimal beats were the mainstay during this set. Brandon’s melodies beside Ken’s keyboard architecture built up to the stratosphere. Dagger-like live electronics were clean and attentive, and amounted to the most spasmodic event of the night. They were a dead ringer for a good closing on this (semi) all-American event. 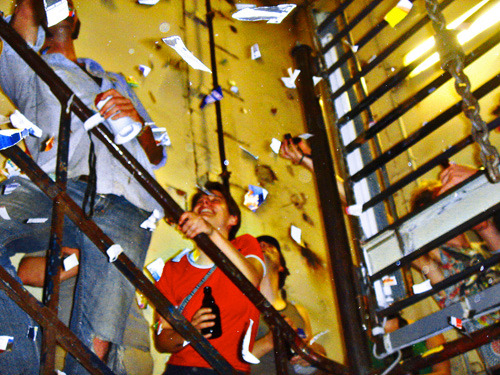 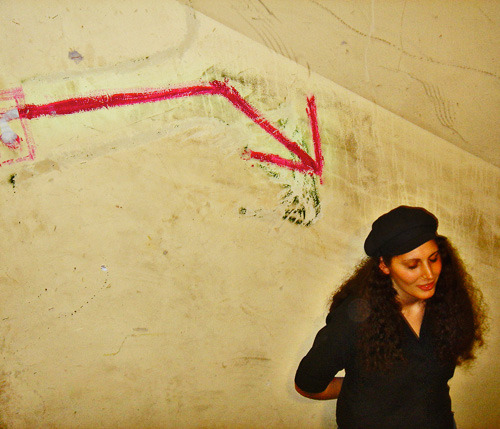 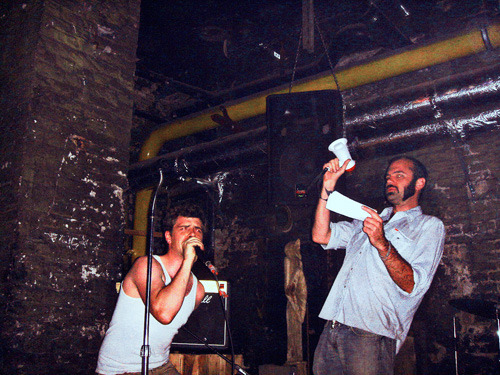 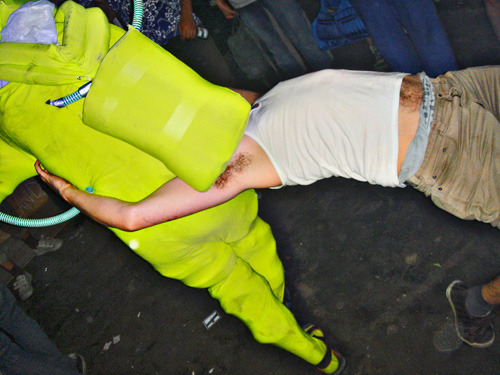 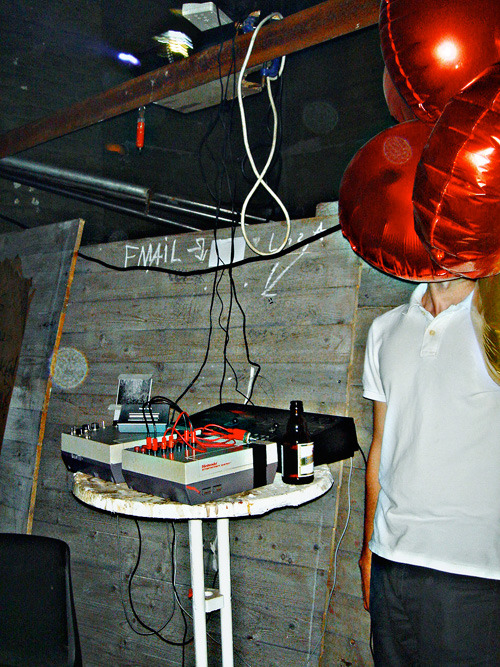 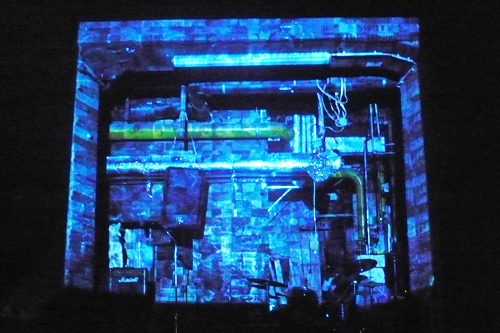 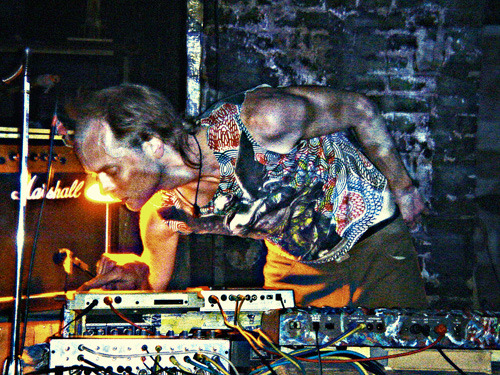 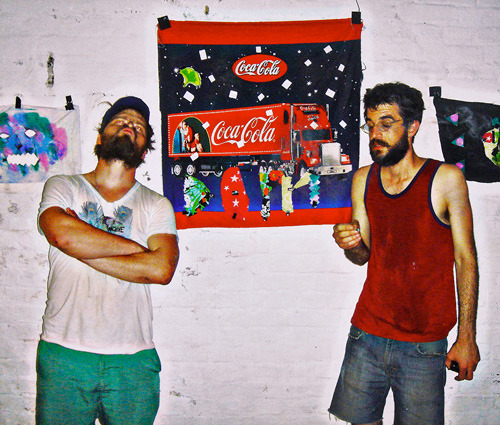 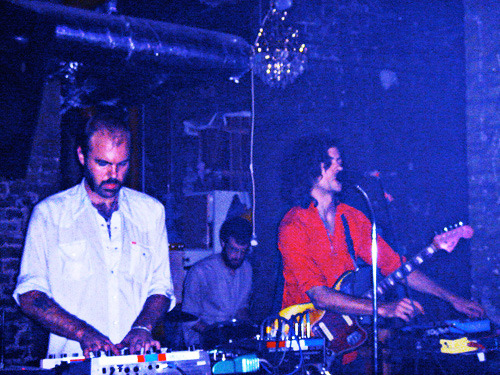 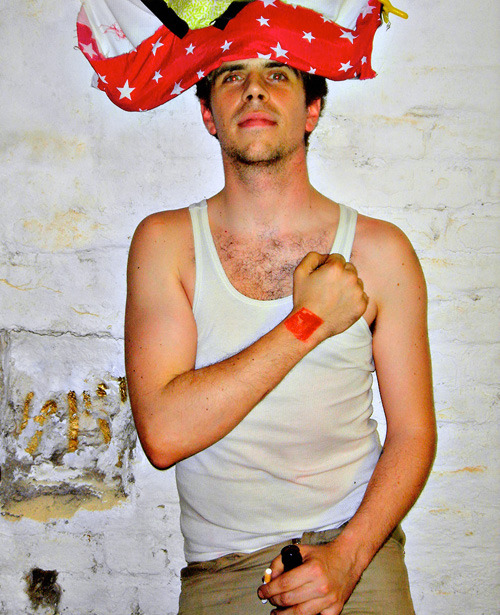