King Khan And The Shrines at One Eyed Jacks, New Orleans

There was once a garage/surf band from Hollywood called The Bomboras. They lived down the street from where I grew up, so I saw a lot of them. Not blessed with great musical talent or a particularly sustainable genre to work in, The Bomboras were nonetheless a kickass live act. At an appointed moment in their set, their keyboardist — a desk-bound accountant by day — would don an Evel Kinevel-style motorcycle helmet, wrap his instrument in aluminum foil, soak it in lighter fluid, and light the whole fucking thing on fire while straddling it and playing an organ solo.

Maybe it’s because I was weaned on bands like The Bomboras that I find many of today’s live acts deadly boring. They deliver lyrics like a surgeon might inform a mother that her child hasn’t survived a car wreck, but the kid’s organs are still viable for donation. This stifling earnestness has lead to a serious neglect of that most crucial ingredient to putting on a good live show: showmanship.

So when a crowd of European geeks, one remarkably unattractive South Asian man, and a pom-pom wielding go-go girl perform coordinated dance steps while belting out hilarious rock’n’soul, I appreciate the effort. The fact that said band also doesn’t have tremendous musical potential or dwell in a viable musical genre doesn’t matter so much because when I see them jiggling and shouting on-stage like a bunch of Tourette’s-stricken epileptics, I know I’m getting my money’s worth. And when that band can describe one of their tracks as “psychedelic/erotic gospel” — and have that turn out to be an accurate description — so much the better (the track was an intra-uterine adventure story heavy on call-and-response.)

The band I’m talking about is King Khan And The Shrines, a ten-person outfit that thoroughly entertained a full house at One Eyed Jack’s in New Orleans this past weekend. While the previously referred to Euro-geeks form the musical backbone of the group, the center of attention is rightly King Khan, the pot-bellied, mustachioed vocalist who projects the air of a coked-up chemical engineer (is that an unfair stereotype? I doubt the King himself would be offended). Clad in a white disco suit and rubber Kaiser Wilhelm-style helmet, he struts and shouts across the stage with an authentic verve that makes his goofy lyrics almost seem heartfelt, although not as heartfelt as when he exhorts the crowd to “bring finger-banging back to New Orleans!”

Khan is an able vocalist, and it’s a good thing too because his gags wouldn’t be nearly as entertaining were he not. His shouts and exhortations have a soul-like grittiness and his croons, although far from James Brownian, are solid. The instrumentals are tight enough that the tracks come out with the speed and oomph the genre demands. Much to the band’s credit, the musical components come together well enough that they would probably be worth listening to even without the stage schtick and funny lyrics.

But make no mistake about it, the stage schtick is a big part of this operation. From Khan’s costume changes to the Energizer Bunny-esque go-go dancer to Khan’s habit of performing in the crowd (at one point lassoing some fragile looking hipsters with his mic cord), King Khan And The Shrines put on a thoroughly satisfying stage routine. That their music is also amusingly ass-kicking comes as a welcome bonus.

It should come as no surprise that this band is signed to Vice Records, the musical wing of the hipster/raunch media empire that dictates the consumption habits of insecure twenty-somethings all over the western world. The fact that Khan made three non-lyric cocaine references during the show reinforces the widely held conspiracy theory that Vice is actually the creation of a PR firm hired by the Bolivian government to promote their exports in the American market.

Like many of Vice’s acts, King Khan sometimes teeters on the brink of outright stupidity. The irony is occasionally too thick and the goofiness too contrived, making it less like watching the overweight Indian kid from your high school perform mind-blowing soul karaoke and more like watching a self-conscious prick from Williamsburg make money for doing something retarded. But when he’s giving it his adorable all and the flock of German nerds behind him are too, there’s a sweetness and an awesomeness to this band that is short supply among musicians these days. 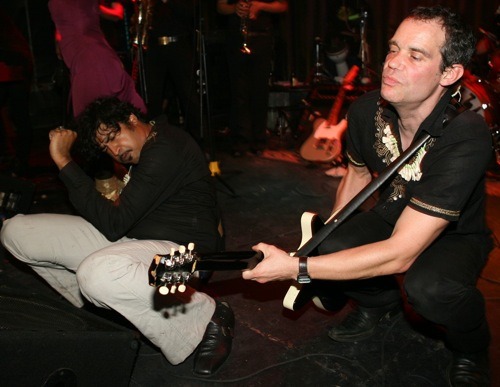 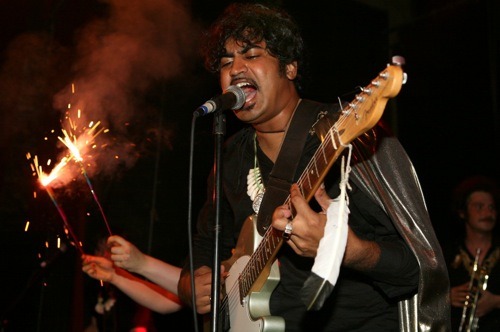 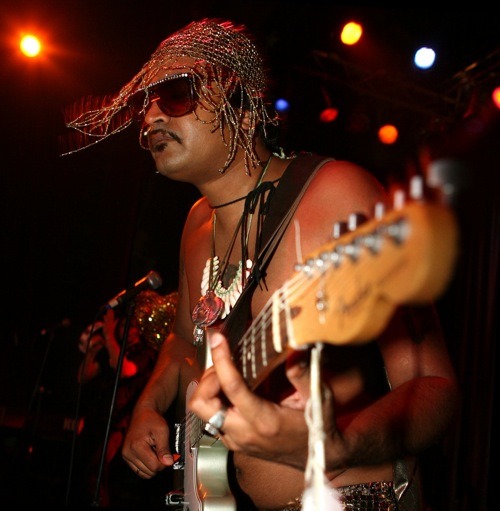 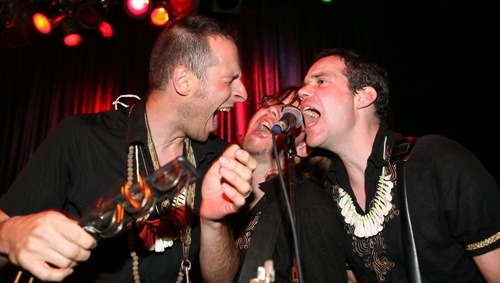 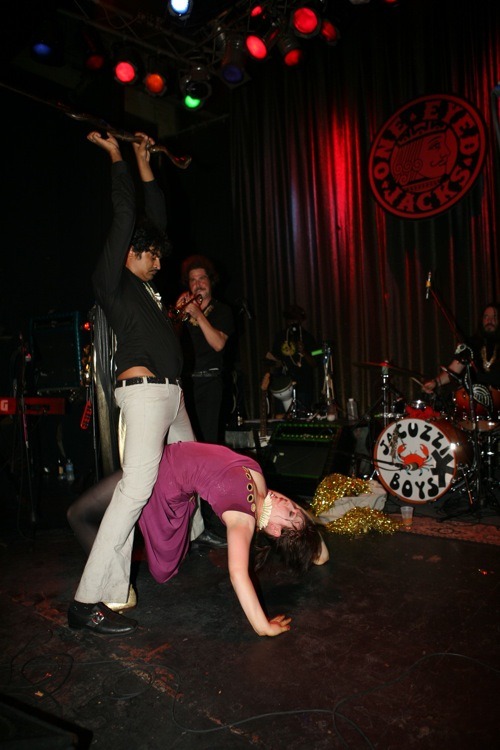 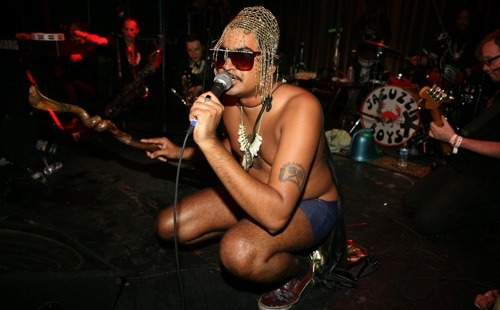