In which more people come to see MGMT and the Ting Tings then have immigrated to Brooklyn from certain Central American countries.

When someone writes the history of McCarren Pool’s all-too-brief career as a mixed-used performance space (I Get Wet: The McCarren Pool Story. Forward by Thurston Moore!), chapters should be dedicated to the line that formed in anticipation of Sunday’s MGMT show. It started right under the pool’s decrepit, grand Romanesque entryway, snaked its way up Manhattan Avenue, and made a sharp right just south of Warsaw before finally teetering out in the Greenpoint backstreets. If the line had been a straight-shot north, the shutter-shaded 11th graders unfortunate enough to be at the end of it would have been treading water in Flushing Bay, making that night’s Mets-Cardinals game a convenient backup for a concert they hadn’t a prayer of getting into:

There was still a line when the show wrapped up at around 7:15. For all I know, they’re lining up still (although I’ve heard plenty of reports of people risking a mean case of lockjaw to scale the Pool fence; I also know people who for sure wouldn’t have gotten in if they hadn’t cut in front of several thousand aspiring — and probably failed — concertgoers. Not that I’d know, but apparently Lorimer Street was a bloodbath yesterday.

This wasn’t just the mightiest queue in the history of the Brooklyn music scene. It could have been the single longest line ever to form in Brooklyn for any reason, ever.

A Talking Heads reunion would scarcely have drawn this many people, a fact that led a certain Impose editor to wonder how many of the line-standers had been paid by Columbia Records. But at with the line wandering into the oil-scarred Greenpoint wilderness, at least one positive occurred to me: this was a bone fide mega-event, something like a junior version of Sonic Youth’s 4th of July show in the sense that everyone fucking went to it. I think I know only two or three people in New York who weren’t planning on going to this; thanks to the pre-teen riot beforehand, I know only two or three people who were actually there. This was Williamsburg’s answer to the Stone Roses’ Spike Island shows, but it was also a tweener reenactment of Pickett’s Charge — a career-making blockbuster for a relatively-deserving ex- indie outfit (or “major label outfit,” if you wanna be a dick about it).

Indeed, every high schooler within a three-state radius cool enough to have glanced at an issue of Vice or, I dunno, watched more than 10 minutes of mtvU was in line for this thing. (These people clearly weren’t Pitchfork readers, because their weak, impressionable minds would figured that a band worthy of only an 6.8 was like, totally below them). This lead me to wonder what the good people of Williamsburg had done to bring this barely-pubescent swarm upon themselves — and whether a single dead guy rotting away near the Pool entrance could really fuck up its karmic balance this badly. But I guess God had the last word here, since an unseasonably bitter rainstorm kept much of the crowd huddled under complimentary beach towels for the first couple hours after doors. The ones who weren’t shivering were happily splashing around in the lagoon that collects whenever it so much as drizzles over the Pool —but most of the high schoolers looked bummed at having just traded four hours of their Sunday for a probable case of pneumonia. Lucky for you sadistic, Paste-reading indie elitist types, things were looking bleak.

The rain abated when Ting Tings started playing, although front woman Katie White was still reminded of her dismal native land, a place where, from the sounds of it, only the most feverish synth grooves can possibly lift the semi-permanent London gloom. The British hype-band and mtvU favorite was a reminder of the physical and psychological punishment so many are willing to endure for a great live show — the sneeringly charismatic White looked pumped enough to start doing backflips while she screeched some of the more delightfully bitchy lyrics to appear in recent pop. Neon spandex and a drummer who looked like a refugee from the mid-90s heroin craze rounded out the whole Spice-girl-gone-wrong act, which is one I think I like way more than I want to admit.

Black Moth Super Rainbow was the only indie-label band on the schedule, and continued Jelly’s recent (as in this week and last week), awesome practice of sticking noisier, druggier instrumental acts between poppier, more accessible ones. Like Ting Tings, BMSR is a blatant appeal to 90s nostalgia, although their psychedelic take on complicated, IDM beats is a little more academic than Ting Tings’ bubblegum schlock. But not a whole lot more academic: they delivered about 40 nearly-continuous minutes of melodic, mind-blowing electro psych, giving the young’uns a chance for a breather and the odd aficionados a chance to appreciate some much-welcome sonic artistry.

And then the headliner. As background: I had to wait in line for an hour to get into this thing, for this show was a hell that even journalists had to brave. Since I was at MGMT’s Thursday night set at Bonnaroo, I knew what I was waiting in line for, although I’m not sure the low top-wearing, learners’ permit toting Westcustrians pacing Nassau Avenue had any idea how uneven an MGMT show can be. They’re a pretty strong live band with an annoying tendency to overcompensate for a lack of original
material; partly through fuzz and drum loops that fail to distinguish
them from about a zillion other synth acts, partly through aimless instrumentals of the sort that have turned people off to Steven Malkmus’s solo work. It’s a mixed bag—exhilaration when a song rises out of the abyss, excruciation in the interim.

There was none of that today. Gone were the spacey guitar jams to nowhere, gone were the jitters attached to playing in front of thousands of screaming fans with maybe 30 minutes of radio-friendly psych-synth for protection. They were playing scared a month ago, but they played with self-assurance and a veteran sense of pacing on Sunday. Their longest song was an encore that clocked in at under 8-minutes (which was, thankfully, 6 minutes shorter than Ben Goldwasser promised–”time for a 14-minute song” I think he said), and their more egregious flirtations with straight-up jam usually segued into a block of actual songs. They had the confidence of a band that was playing over their heads and knew it, so much so that an eye-roller like “Electric Feel” carried with it a certain, odd catharsis: the sense that after dealing with five hour, waits, torrents of rain, a total dearth of alcohol (the party went dry) and half the wannabe hipster 10th graders in three states, we were finally listening to a couple Wesleyan grads singing one of the most un-fucking-believably stupid songs ever written. It was sublime in a deathly non-ironic way, sublime in a way that monuments to sublimity like Sigur Ros or Fuck Buttons could never be. It was rapturously ridiculous.

When they played “Time to Pretend,” there was a sense that this was what the entire afternoon had been building up to–that this is why kids from up and down the East Coast (I met a few people who’d driven up from Maryland. What the fuck?) had been circling their calendars for months, and why some of them had clawed their way up a rusty fence in the middle of a driving rain. “C’mon let’s have some fun!” is a line too canned to take seriously, but in context it was an awesome emotional release. This was the sort of show that you kinda have to hate but secretly dream of going to–and really, who cold hate that? 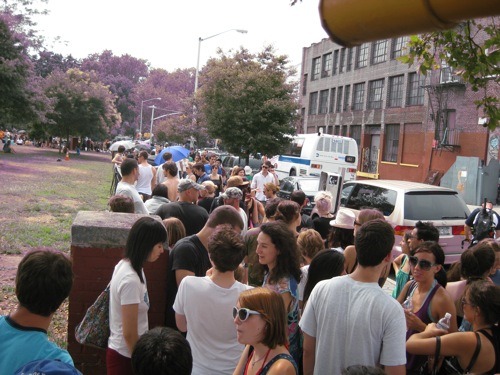 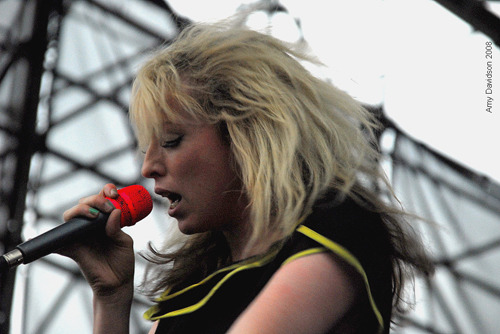 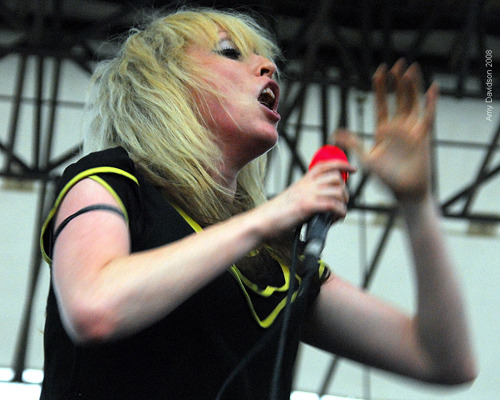 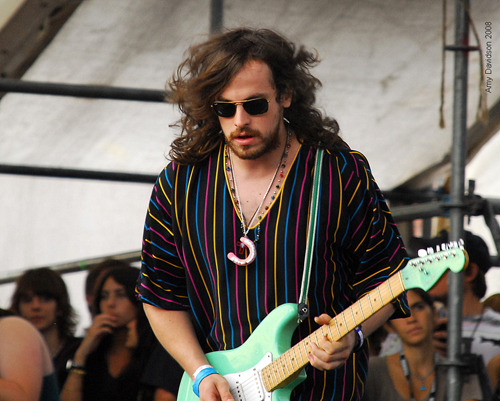 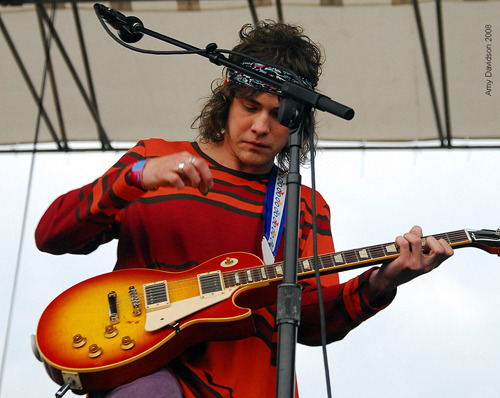 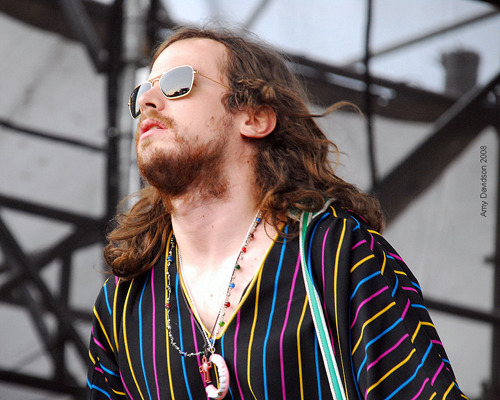 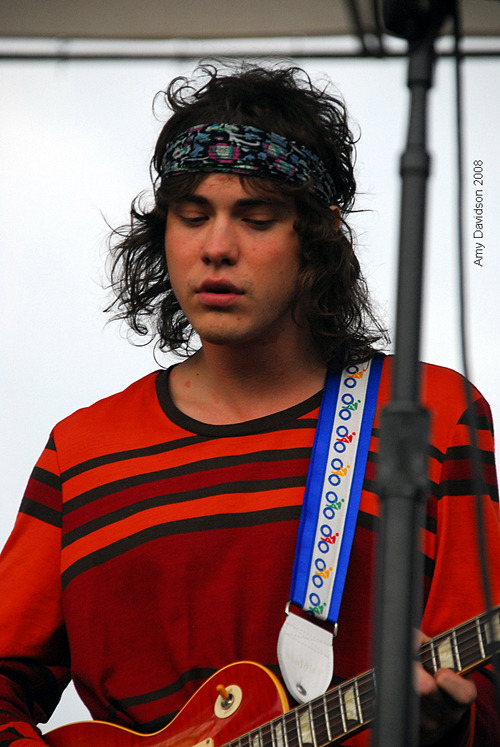 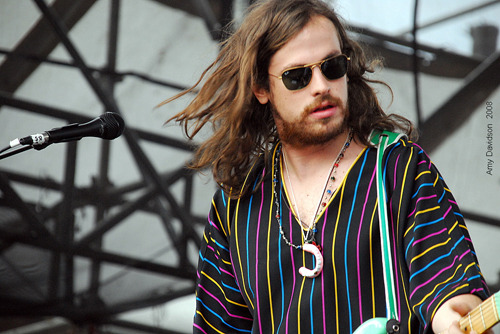