Siren Song, Part One, The Performers

The Coney Island Siren Festival is the Village Voice's 2008 pick of the indie litter.

As outdoor summer concerts go, Siren Fest tends to separate the armchair rock enthusiasts from the die-hard fanatics. It’s far (an hour from Manhattan), hot (no shade), long (about nine hours) and hard on your bodily functions (you must eat fried food, and shit it out in porta-potties). Nevertheless, Saturday saw a brave crowd ready to take in this year’s particularly strong line-up.

I arrived in time for the second half of Parts And Labor, and listening to the muddy, far reaches of the sound system as I approached from the street, I could already tell it was them. It wasn’t just BJ Warshaw’s magnificent beard that broadcast to the back of the audience; P+L aspire to a sound massive enough to fill Yankee Stadium, or, as their website notes, the addition of guitarist/noise-master Sarah Lipstate has made them “a-four piece band trying to sound like a six piece instead of a three piece band trying to sound like a five piece.” Bass, guitar, drums, keyboard, and numerous electronics created a dense mass of well-balanced noise pop over which BJ sang his anthemic vocal lines. Lipstate brought out a fast forwarding cassette player at the end and rubbed it on her pickups to add to the mayhem; it’s touches like this that power those “holy shit” moments all bands covet. It doesn’t hurt that they’re excellent head bangers, either. Don’t ever cut that hair, Parts And Labor.

The Dodos calmed things down a bit, but not for long. Meric Long’s mellifluous voice and folky, at times tropical, guitar lines soon gave way to feverish, vaguely Flamenco strumming and a noisy section during which he banged on a trash can, then threw his guitar on the floor and violently bottlenecked it. I remember thinking the Dodos were pleasantly pretty when they played the Impose showcase at South by Southwest, music I might listen to while writing or cooking dinner. This raucous performance, with all of Long’s newfound rockstar bravado, proved their ability to command my full attention.

Times New Viking were considerably more polished than the last time I’d seen them. Though they’re known for playing fuzzy, lo-fi garage rock in the school of early ‘90’s indie, their hooky keyboard lines, sing-a-long choruses, and Beth Murphy’s undeniably pretty voice made it a surprisingly poppy experience. These elements combined with their longstanding love of distortion, boy-girl shout choruses, and general punk rock exuberance to remind me why we all loved indie rock to begin with: once upon a time, it was a lot of fun! The happy kids in TNV jumpstart the old gal and make her run like new.

Next, Ra Ra Riot played big, heartbreaking pop songs. Sincere vocals about love, death, and life stood proudly over delicately interwoven guitar, bass, drum, keyboard, cello, and violin lines that culminated in forceful stage drama. The band lost their friend and drummer John Pike a little over a year ago, and they played with the intensity of those who have stuck together through tragedy and come out fighting. This love was especially apparent during “St. Peter’s Day Festival,” written by Pike, during which singer Wesley Miles affectionately touched his head to those of his band mates more than once. By the time they played “Dying is Fine”, the funeral had become a party, and Miles crooned “I wouldn’t like death if death were good” over a joyous one-two beat reminiscent of Pulp. The whole thing was so damn beautiful that I will not even criticize cellist Alexandra Lawn for matching her bra to her skirt. You’d probably do that too, if you were playing on a hot stage, and didn’t own a bikini top. As my friend who hung out in his briefs all day pointed out, underwear is just like a bathing suit, only made out of cotton. Did I mention it was beautiful?

Islands' Nick Thorburn walked away with most theatrical front person of the day (though that doubtlessly would have gone to These Are Powers’ Anna Barie had I been there for their early set). Lead singer Nicholas Thorburn emerged initially wearing the Dodos’ dented trashcan on his head, and a wife beater bearing a large fake(?) bloodstain. He performed the first song from inside the can, and I couldn’t help but stare at the highest thing visible on his person, i.e. his zipper, which looked like it was migrating south. He then removed his headgear and delivered a cute non sequitor: “When trying to beat the heat, I recommend you take your pants off. Or barring that, put a trash can on your head.” Unfortunately for the dirty lechers in attendance, this nubile youth did only the latter.

The band then launched back into their set of peppy indie pop, straddling the various lines between dance, rock, pop, and emo (no matter how cheerfully you deliver lines like “Right from the start I was stabbed in the heart / didn’t know I wasn’t breathing didn’t know I had been bleeding,” the comparison is inevitable). They also used some of those tropical motifs the kids seem to like so much these days, including the ubiquitous “dum, da-da-da” Reggaeton beat. Islands employ this to good effect, sounding fuller and freer than many of their colleagues. I should also note that this was the first time the jaded VIPs and sweaty reporters who’d been there for six hours got to dancing in any major way, so props to them (both the band and the reporters).

By the time Stephen Malkmus And The Jicks went on, everyone was sunburned, tired and thirsty (the vodka/energy swill they’d been giving us, while refreshing, was not exactly a sports drink). I was excited to see the man who’d launched a thousand indie bands come out and do his thing, and almost equally as excited to see Janet Weiss drum, as it’s probably the closest I’ll ever get to seeing Sleater-Kinney play live (boo). Unfortunately, for some reason the sound was suddenly terrible, and all I could hear of this rock royalty extravaganza was a whole lot of muddy, vibrating bass sounds. After giving up and venturing over to the pay toilets at Astroland (worth the $0.25 to avoid the rank, paper-less port-o-potties), I watched the last few songs from the other side of the fence, only to find that what had been an awful mess up front was now a nicely balanced mix. I don’t even know what to say, other than yes, Malkmus is awesome, and deserves every bit of hype he’s ever gotten. He’s also a bigger guitar god than people often give him credit for; just because he doesn’t usually feel like busting out with a solo doesn’t mean he can’t play one anytime he likes. If Times New Viking is any indication, Malkmus is once again inspiring a generation of kids to make good sounds, and watching both bands play in one day, it’s easy to pretend all those millennial Strokes-clones were just a bad dream. Or, in the words of Malkmus the Great: “Thanks, guys. Thanks for having good taste.” 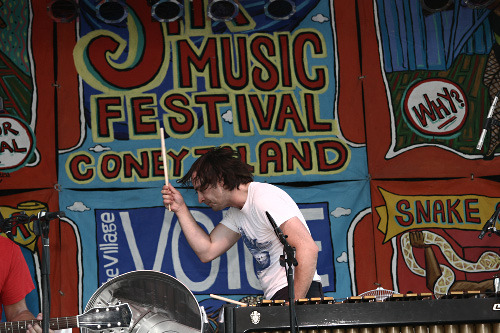 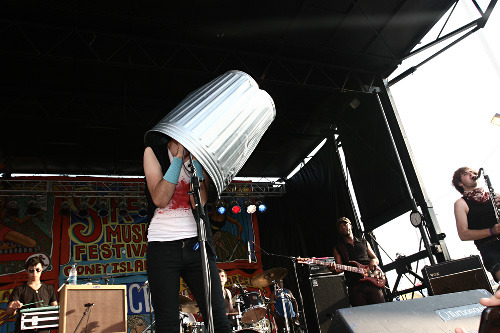 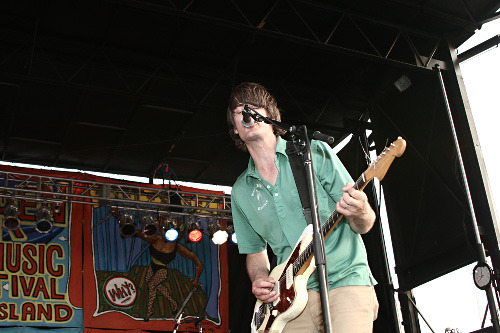 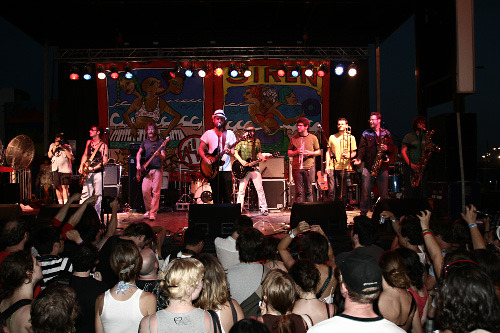 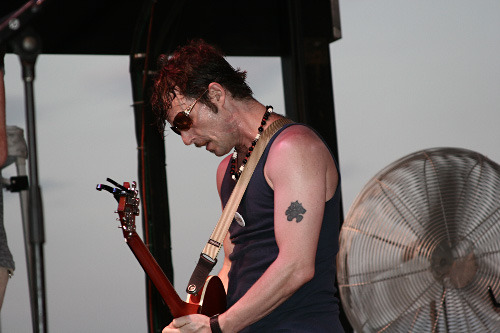 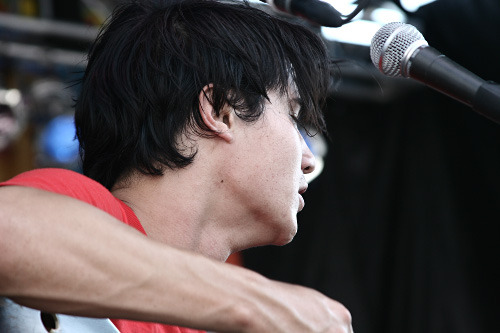 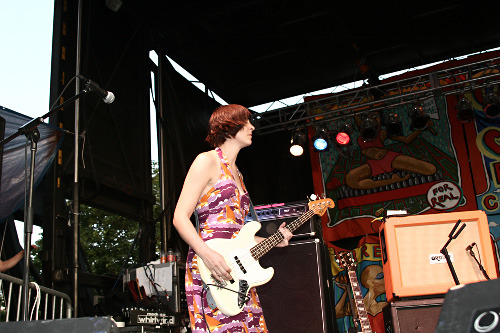 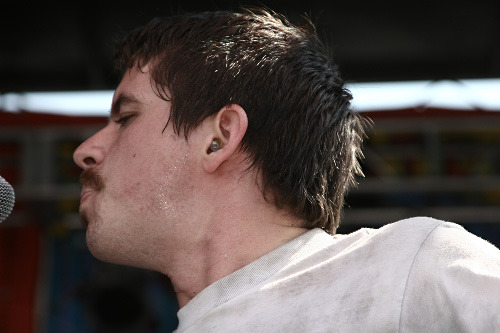 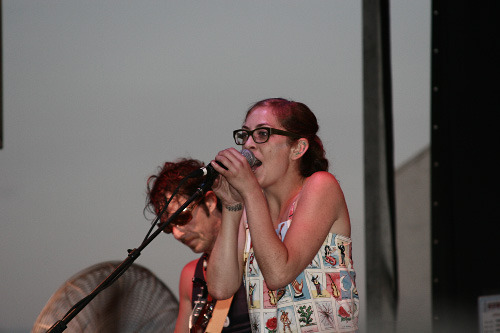 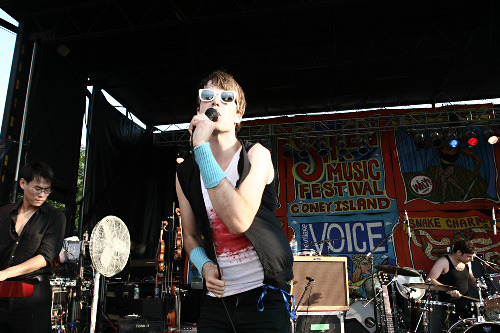 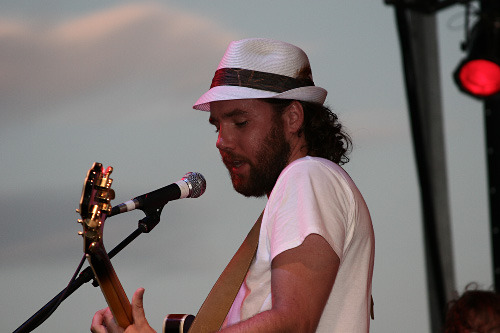 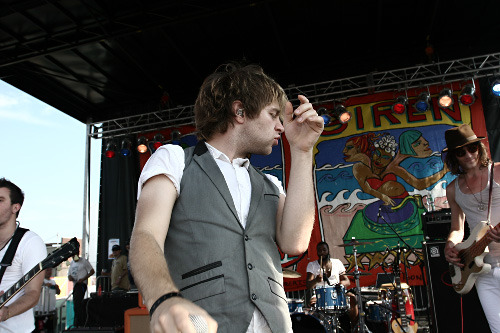 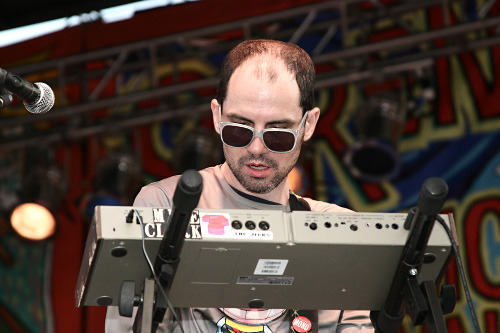 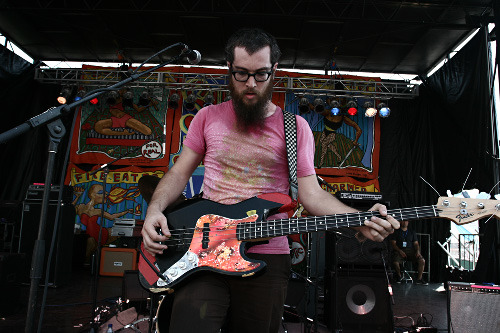