The current nostalgia cycle is stuck on the 70s. A consequence of this obsession is that fringe musical genres kept on life support for the past three-plus decades by cliquish subcultures suddenly find themselves in the pseudo-mainstream’s spotlight. Metal, and its various spin-offs like thrash and grind, is one such genre. Emerging in the late 70s, metal is certainly worthy of attention, since it was almost completely ignored by critics in its formative years and has suffered through a long desert of obscurity. The unfortunate result has been that many kick ass bands have been known to only a small, Dungeons & Dragons-esque circle of long haired metal dudes.

I approach musical acts that form during nostalgia cycles with skepticism, what with the implicit suggestions of opportunism and derivation, and plenty of bad examples to point to. I’ve found that these bands tend to fall into two categories: the straight ahead acts that come directly out of the cryogenically preserved subculture, or acts that are fairly new to the game and try to create some crossover appeal. Of course, it’s a bit more complicated than that: there is some evolution within subcultures, and crossover bands are sometimes composed of longtime devotees of the genre. But overall, I’ve found the categories to mostly be on target.

Last night’s show at One Eyed Jack’s in New Orleans illustrated the strengths and weaknesses of both types. The show was kicked off by straight-ahead thrash/metal band Skeleton Witch from Athens, Ohio. A perfect example of a band birthed directly from a subculture whose lineage goes straight back to the genres origins, they were the most traditionally metal act of the night. They played hell of fast, showing off their intense instrumental prowess and thrash influence, and the powerful vocals were of the tried and true growly, demonic type.

The fact that the band could absolutely shred made their unwillingness to play songs longer than two minutes all the more frustrating. Rigorous adherence to current genre norms prevents bands like this from achieving their full potential and pushing stylistic innovation. Only on the last song of their set did they discard their ultra-tight instrumental composition and just rock the fuck out. The results were electrifying; a full set like that would’ve brought the house down.

Just as important as a metal band’s music is the quality of its hair. In this regard, Skeleton Witch boasts an all-star line-up, sporting a full set of visibly well-maintained back-length hair and thick, creepy beards. Such was the movement of their hair while head banging that the girl standing next to me wondered aloud if she should ask them what kind of shampoo they use. Their hair gets a 9/10 on my scorecard. Also, their stage props included animal skulls, a smoke machine, and a bank of strobe lights, which was fucking rad.

Next up was the Brooklyn-based metal band Early Man. Perhaps it was the contrast with Skeleton Witch’s primal ferocity or maybe it was their vocalist professing that he “couldn’t wait to puke in some stripper’s asshole about three hours from now”—a sure way to endear yourself to New Orleans locals—but Early Man lacked in both strength and originality. Thin vocals and guitar work overly reminiscent of various early ‘80s metal pioneers made the band sound imitative and screechy.

To make matters worse, their tattered locks only earned a 4/10 on my hair scorecard.

Last up were thrash/rock headliners Valient Thorr from Chapel Hill, North Carolina. Featuring a charismatic but tiresome front man—a heavily bearded individual who goes by the name Valient Himself—and synergistic songwriting, Valient Thorr was good enough to inspire the only legitimate moshing of the evening. Himself, um, himself jumped around and wailed like a caffeinated teenager, impressive for a guy who donated a kidney to his diabetic father just a couple months ago. Like Early Man, Valient went with a less growly, more hard-rock vocal style but pulled it off with greater success, possessing both the volume and range necessary to accompany the band’s psychedelic-tinged riffs.

Besides genre-blending musical composition, Valient Thorr is distinguished by something even rarer in the contemporary metal scene: a political bent (which is even odder when you consider their record label is Volcom Entertainment). Metal has been largely apolitical of late and its current followers are generally more interested in, well, puking into strippers’ assholes than radical politics. Although metal is the red-headed stepchild of punk, which was intimately tied to anarchism in both the U.K. and the U.S., part of metal’s appeal is that it dwells almost exclusively in a dark fantasy world baring little resemblance to its fans’ reality.

Valient Thorr, while not entirely of the metal scene, is certainly related to it, and the fact that over half of the band’s songs have political lyrics is a significant departure. That those lyrics are a somewhat confused mish-mash of various Left/progressive strands woven into an analysis less coherent than that of some teenaged hardcore bands matters less than the fact that they’re compelling and engaged in a meaningful way. The earnestness of those songs can seem a little odd alongside anthems to professional wrestling and other more flip material, but their conviction is undeniable.

Unfortunately, Valient Thorr’s stage antics and between track mumblings set off my bullshit detector, as Valient Himself seemed to be working too hard putting on his crazy man routine. Maybe this observation is based on an unfair bias stemming from their corporate label affiliation, but the preciousness of their performance gave off the distinct stench of marketing. Their music is genuinely original and entertaining, so it seems odd that they would feel the need to contrive a stage façade rather than rely on one that grows organically from their performance. They might want to get some advice from Skeleton Witch on this.

Valent Thorr excels in the hair department, with nice head hair accompanied by three thunderous beards (but were they told to grow them by a marketing hack?) They get an 8/10 nonetheless. 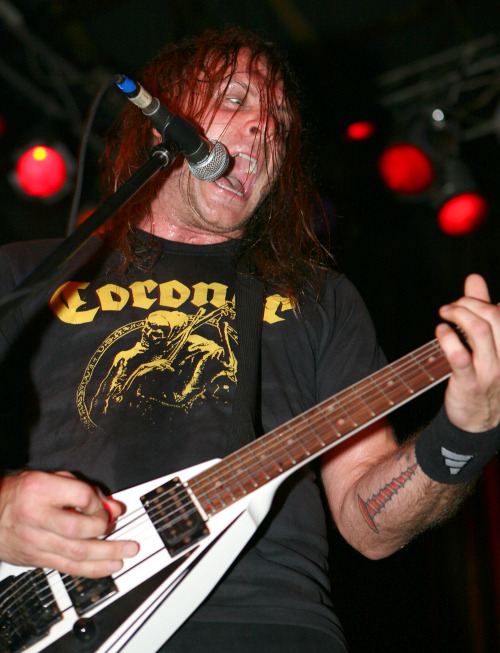 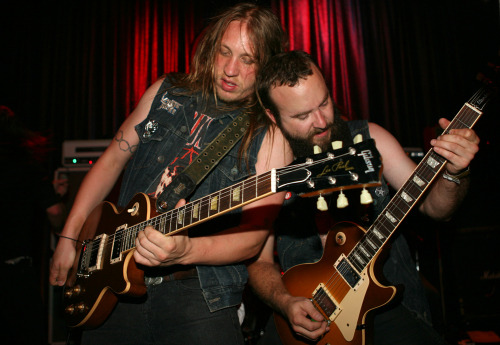 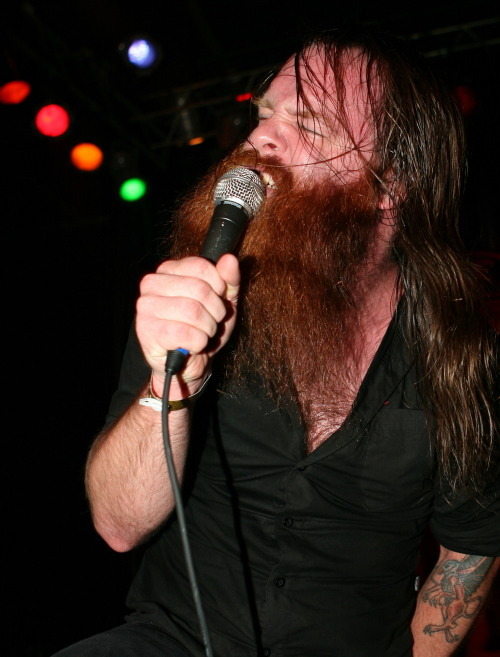 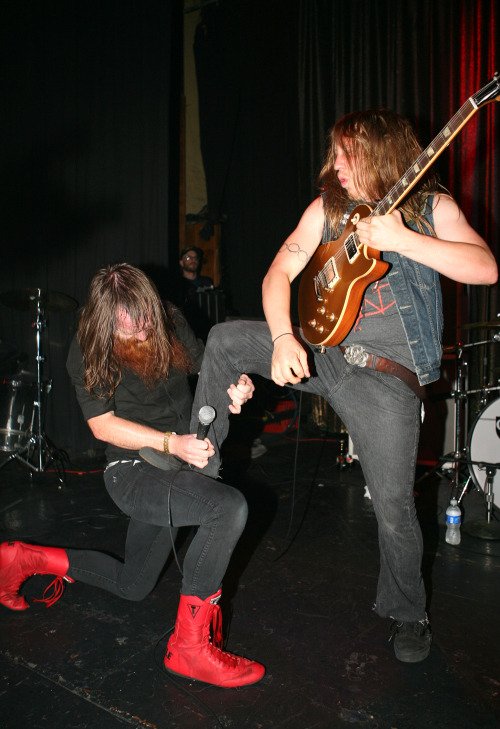 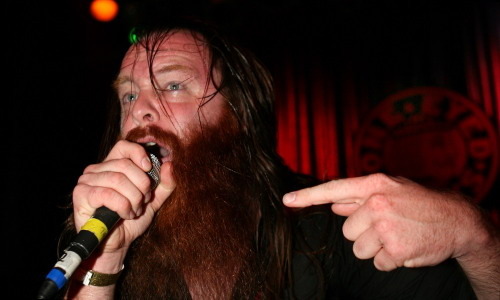 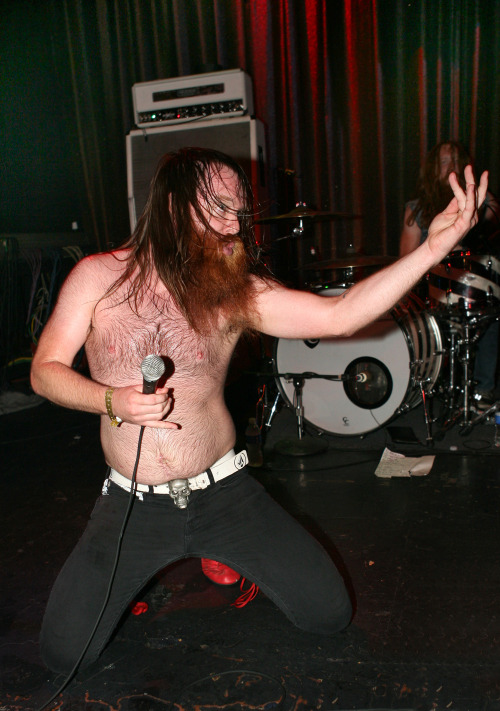