I was primarily drawn by Madison, Wisconsin’s, Dead Luke and Iowa City’s Wet Hair. I’ve been digging them thoroughly over the past year, but I also needed to catch Sacramento’s Ganglian’s, whose new album, Monster Headroom, packed with neo Beach Boys’ harmonic bliss, has more recently taken over my iPod.

Performing in front of a crowd of no more than a dozen or so early attendees, Dead Luke sped through an exceptionally brief set of intriguing reverb saturated vocals and distorted electronic background fuzz. Ganglians wasted no time living up to their gorgeous recordings. Besides the fact that they looked much younger than their press photos imply, the band gave a nice introduction to their catalog, running the gamut from harsher punk (“Rats Man”, and “Hair”, from their self-titled 12″ on Woodsist), to the sugary sweet (“Lost Words” from the aforementioned Monster Head Room) in their set of half-a-dozen songs.

John Maus then whipped the crowd into a frenzy with his earsplitting vocals backed by boisterous, but catchy-as-all-hell retro synth riffs. Never a huge fan of Maus prior to the show, but I found his live performance exponentially more engaging than the prevailing lethargy that dominates his albums.

As it was Sunday and approaching midnight (the reason I opted to forego Psychedelic Horseshit), the crowd dwindled significantly between Mr. Maus’s exit and Wet Hair’s performance. With their latest effort, Dream, Wet Hair produced some of the best stuff that toes the line between psychedellic rock, noise, and skronky outsider jams. Shawn Reed’s detached, spooky vocals and primitive Casio keyboard tones are the perfect complement to Ryan Garbes’s muted drumming (the two even played off of one another from time to time during the show as Garbes stationed himself at a keyboard of his own). The duo took an equally rad turn away from this for their three songs however, as Reed utilized a more uptempo, almost funk beat early on that gave the whole set a more unanticipated, buoyant flavor. 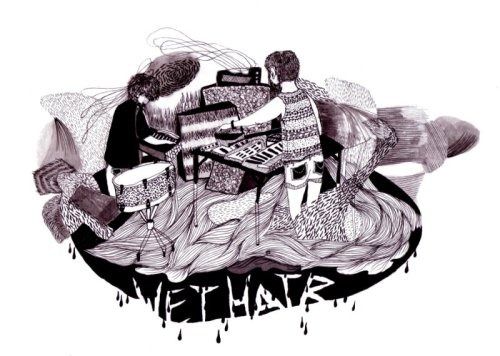