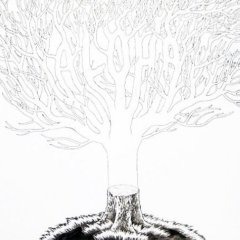 Contrary to claims made on their MySpace page, Aloha is not “experimental”, and only abstractly “progressive.” The first genre that comes to mind when listening to their EP Light Works is sadly neither of these, but something in the neighborhood of their hated opposite: adult contemporary.

Granted, band leader Tony Cavallario has a knack for arrangement. Songs featuring a single acoustic guitar benefit at times from sudden orchestral swells, piano solos, crescendos and decrescendos. Yet all too often, bursts of dense arrangement add a dose of preciousness to what might otherwise have been nicely understated, like in “Trick Spring” when the line “every sleeping bough is waking up” triggers an aggressively spring-y swell of “aahs” and a synthesized instrument that sounds like something out of Zelda. And even the best arrangements can only carry a song so far without interesting melodies; more often than not, the listener is able to impatiently predict each note as Cavallario plods along, treating each syllable with a childlike egalitarianism. Overuse of pleasant yet predictable guitar arpeggios only serves to compound the problem.

Add in some blandly raspy vocals, and almost every song on the album sounds like it’s auditioning to be on the soundtrack of One Tree Hill. Overuse of chorus and reverb effects is partly to blame, but the offending timbre comes mainly from Cavallario himself, who seems to have made a mission of draining all emotion from his voice. This makes sense, considering most of the lyrics are generic enough to make “your body is a wonderland” look like a deeply personal observation. Occasionally he does say something telling, like the decidedly anti-rock and roll sentiment “too much of anything is bad,” repeated over and over with smug certainty in “Passengers.” But the worst moment comes during “Gold World,” which sounds like the sequel to Goo Goo Dolls smash hit Iris when Cavallario rasps, in his best nineties voice, “we can meet under the streetlights in a world that we design.” (But I thought you didn’t want the world to see you…?)

The one standout song on the album, “The End,” gets the chorus effect/personality balance right (though it sounds copied from Elliot Smith) and injects some interesting key changes into the melody (even managing to recall the Beatles), and the bridge/interlude bounces along with a self consciously retro-cheerful type of cheesiness, i.e. the good kind. Unfortunately, this infective mid-tempo energy is not seen anywhere else on an album that is, in general, at best uneventfully pretty and at worst downright lobotomized.