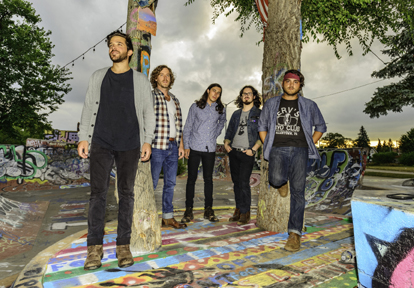 “Daily Routine” is the creation of Detroit, high school friends, Andrew Pawelski and Nick Chevillet. Forming the group Handgrenades, the now 5-person group is fresh off the release of their second full length album, Tunnels. A lighter feel than alt-rock, “Daily Routine” floats toward a near-perfect indie binge, featuring some of the smoothest vocals out there.

We got a chance to ask the guys some questions in honor of the premiere.

Andrew Pawelski: We were bought from a pet store from this little boy. He was on his way home and this truck carrying a radioactive substance called Mutagen was coming down the street.  This blind man was crossing the street, almost got hit by the truck, but was pushed out of the way by a gentleman named Matt Murdock who then ran into the little boy carrying us. The truck spun out of control, we fell down a sewer, and a container of the radioactive goo got all over us, creating the band now known as Handgrenades.

When did you choose to pursue music? Was there an “aha” moment?

Andrew: I personally chose to pursue music at a young age. Any instrument I would come across I would try to play and figure it out or I wasn’t satisfied. That’s when I knew I had a love for music. Nothing else keeps my interest like music does. I guess the “aha” moment comes when we all get together, hang out, and just jam. There’s chemistry when we all get together that I can’t fully explain. We all have similar taste in music, style, and humor, so we all naturally fit together. So, we were like, let’s do this thang!

Your “Daily Routine” video certainly matches its title. Was it obvious what you wanted to do with it when you wrote the song?

Nick Chevillet: Honestly, we just pulled together what resources we had at the time and thought it would be fun to make a video out of actual live footage. It’s pleasing to hear that it goes together well with the song. I think that’s a credit to Ben Keeler, who assembled it for us.

What inspired the song?

Nick : The lyrics to “Daily Routine” are inspired by anxiety. That feeling where you can’t keep up with the rest of the world and you just want to disappear for a little while.

Any fun anecdotes from filming?

Nick: The “HG” jackets that we are wearing in the rooftop shots were gifted to us just moments before the camera started rolling. That footage is pure excitement.

What do you hope people feel when they listen to “Daily Routine”?

Nick: I don’t really hope people feel a certain way when they hear the song, I just hope that they can relate to the lyrics and enjoy it for what it’s worth.

“Daily Routine” is pulled off the Handgrenades‘ album Tunnels, which can be found on Bandcamp.