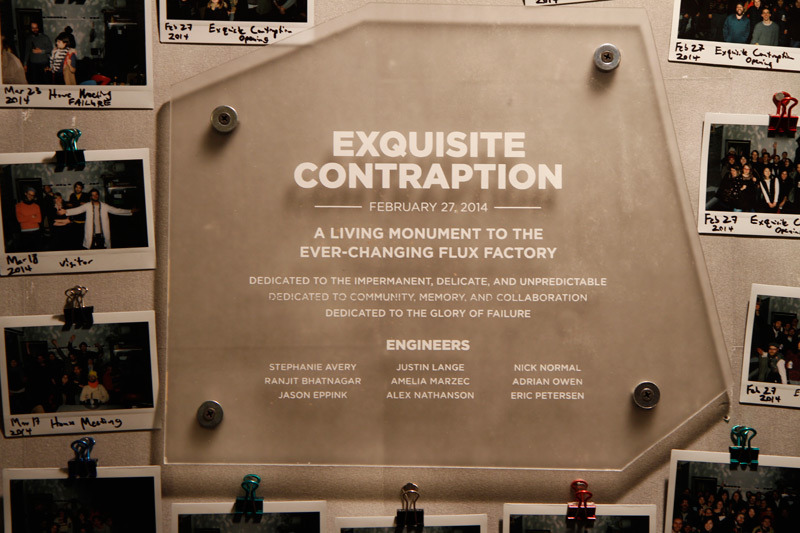 Exquisite Contraption is essentially a camera as wide as the Flux Factory building in Queens, and it shoots Polaroids. “The machine is designed in a loop,” says Alex Nathanson, one of the artists who helped build this Rube Goldberg along with a mechanic, programmer, carpenter, and urban grad student, among others. The starting point, he explains, is a sound-activated box in their kitchen on the second floor: “If you follow the machine to watch everything in action, it takes you downstairs, across the building and ultimately, back into the kitchen where the camera is.” The machine took approximately a month of planning and a month of building before they started running it in February, but it’s an ongoing process. This Friday, they’re celebrating it for the second time now that it’s working better.

What led you guys to build this thing? And what is the project's end purpose?

Alex: We wanted to build a monument to precarious, collaborative, and exciting failures. The project’s literal end purpose is to take a photo, but we wanted to explore community rituals too. Every Monday night the members of the collective hold a house meeting and we try to take a photo at the end of it. There are many, many people involved with Flux over the course of a year. Some are only around for a few months, while others are here indefinitely, and we wanted to document our community.

What were your roles in coming up with ideas and getting it done? I believe Stephanie Avery, Ranjit Bhatnagar, Jason Eppink, Justin Lange, Adrian Owen, Amelia Marzec, Alex Nathanson, Nick Normal, Eric Petersen are all of you.

The project was highly collaborative, in both conception and fabrication. The building process was sort of like putting together a giant moving puzzle. Each part of the machine is only as good as the pieces that proceed and follow it. If the paper shredder doesn’t trigger the catapult, that catapult won’t trigger the remote controlled car and the picture will never get taken.

“Exquisite Contraption” has a really nice ring to it. It's a really interesting idea but it's also just an experiment and there's bound to be some things that need fixing, correcting, etc, right?

Yes! We’ve used everything from scotch tape to welding to tie all the bits together so there are bound to be some parts that need more upkeep than others. The most exciting thing about watching a Rube Goldberg Machine is it’s precariousness, so you need to be open to failure. We’ve also been embellishing on what we already built since we started running it.

Is the party happening in there, will it be taking photos? Should people dress fancy?

The party is at Flux and we plan to be running the machine multiple times an hour that night, resulting in a photo each time. Dress Fluxy.