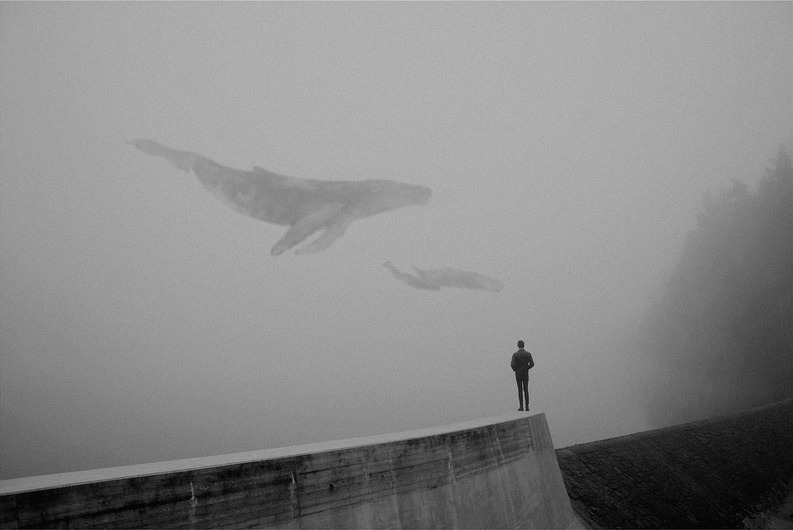 Living in a small village near Prague, Czech photographer Martin Vlach says that he loves looking for new and interesting locations: “there are a lot of woods and ponds I really like.” His latest black and white photo series is an amalgamation of carefully composed fog that brings to mind the capital’s oceanic climate rather than NYC's harassing winter, and of awkwardly affable mystery, like that of men looking at the ground at something unclear to the viewers's eyes while a blatantly large whale does a back flip in the sky. Whether with whales, or with daring attempts to take us out to the edge, Vlach has earned the reputation of being surreal. The way he uses the objects captured within the frame to cut through his compositions is also worth noting.

What is your fascination with large aquatic mammals?

I wouldn't say it's a fascination. I was looking for an element that would fit with the fog but also look surreal. And I think sea animals like whales or sharks are perfect for this.

Those men in the forest and open fields, who are they?

All of them are me and I just thought it would look odd to duplicate myself.

What do you use to take photographs?

I take my photos with a Canon SRL camera. But someday I want to try a classic analogue camera.

What is your process like for completing each piece or series?

Mostly I go out with some ideas in my head and then I try to capture them as best as I can. Sometimes it works but sometimes I create something completely different from what I had thought. But there are times I just go in the woods, listening to music and thinking, and some pictures from this series were actually created when I was just walking with no ideas at all.

Will you be upset if I try to color your photos?

I would say that the atmosphere would remain and that's what is important. I chose black and white photograhpy because of its simplicity and timelessness.

What are you working on next?

Now I'm trying to move on. I don't want to make foggy images with whales for the rest of my life. I'm trying to create new things that will be different but carry the same style that I started.