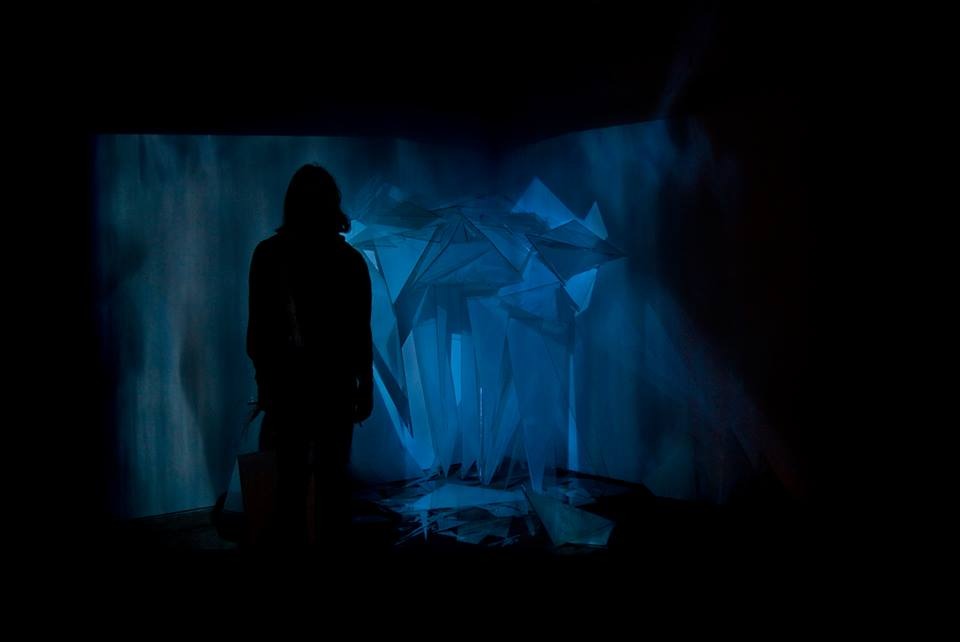 Tonight begins a weekend engagement with multimedia artist Melissa F. Clarke's exhibition EARTH FLAT, which premiered last month at Montreal's Sight & Sound Festival. The show includes a jagged, luminescent, azure glass glacier, with images from the Arctic projected onto it. The images are compiled from Clarke's recent expedition along the Northwest coast of Greenland — Greenland's ice sheet is the second largest ice body in the world.

The installation, dubbed Sila, has an ephemerality to it; oil and water have been run through the glass, causing it to wear down and fracture. The aftermath of this process will be on view at REVERSE, an expansive gallery in Williamsburg. Melissa F. Clarke took time to email and gchat with me whilst in a flurry of installation.

Can you tell me the countires and landmasses you visited on your expedition? The dates of the trip and if there were any return trips.

My trip went like this:
Left Fri 03AUG LV 11:10pm NYC-KENNEDY —> REYKJAVIK (Iceland)
then Greenland and the places I went to along the coast of Greenland, often living in local houses overnights towards the end…

Can you differentiate for me Sila and After the Ice?

Sila is the title I gave to the installation I have been working on conceptually and design-wise since my return from Greenland and the Arctic. I was so affected by the culture, infrastructure, and social around the ice sheet and area that I set out to collect data from that I choose the greenlandic word to express this all encompassing and nuanced way of looking at an ecology of things, people and 'nature' or weather and climate.

After the Ice was the name of the Kickstarter campaign. It could have been the title after I went on the expedition but I did not want to use it anymore.

How does or did the water and oil wear down the glass structure?

The glass is held together with paper and tenuously arranged or put together with it in certain places… so the water and oil compromise the structure and bonds in areas, creates pressures on placement and bonds of the glass… causing pieces to fall and the paper to wear or buckle. Now it looks quite worn and it will get better with future installations, I think.

How did you choose the images that would be projected onto the piece?

The video projected on the piece is created with an algorithm I wrote, with some help from R. Luke DuBois. It generatively builds images out of thousands of pictures of ice I captured in the arctic.

With EARTH FLAT, how do you navigate the relationship between a glacier as an endangered body of ice and a semi-permanent glacier of glass? How is technology helpful or a hindrance?

I think your question actually demonstrates the relationship quite well. I've been working with glass in relation to ice as it does reflect the fragility and at the same time the potential force, dangers and the crystalline structure of ice, glaciers and ice sheets. Technology is very present in my life, and in most of our lives living in the US…so it is 'natural' to me to use it in my work. I don't find that using the tools and products of human design and production conflicts with my thinking about a natural process, climate or these things, in fact I think it puts it all in a very relevant context in the art and the way it all comes together.

Where do you see Sila in the landscape of the art world?

I am not sure how this work sits with the rest of the art world. Right now a lot of work around me is very new aesthetic, web based, and / or analog and purposefully archaic. I like both of these approaches, but mine is neither. My work is what Earth art could be in a post-media age…in a time where we are already so accustomed to the digital media and networked culture that these things are part of the work but not central…and yet the glass and the gallery and site references are landscape that Smithson or Earth art influenced in some ways.

Where do you see yourself in this project?

With the event at Reverse, specifically, I really wanted to inspire and create a platform for others to engage with ideas I had been working with as an artist. I took it as an opportunity to create a space where things might happen. In the installation process I've learned to participate more when making the work, so for events and in becoming part of a team there is a relational aspect to the work that benefits everyone and the work artistically; and I decided to run with that and see where it goes for this weekend. I still remain an author of sorts, as I'm bringing this experience and these concepts to the table and instigating an event or an artwork. But really it becomes something of a group effort and the results are shared and art created by many. I try to reflect that in the title and most people seem to gel with the structure and platform of the event or their roles in the space.

Originally from Syracuse, NY, and having recently returned from the Arctic, Melissa F. Clarke is a Brooklyn, NY based interdisciplinary artist that has substantial experience with ice and glacially carved terrain. Often using data combined with other content, Clarke makes multimedia installations containing sound, video, and interactive art. Clarke creates her own custom hardware and software for her work and works with scientists, engineers and programmers as part of her process. With her recent project 'untitled antarctica' about the other, southern pole, Clarke endeavored to reconnect seismic data collected from beneath the Antarctic seas with its more organic source. Using sound, video projection, wood, and glass sculpture, she created an immersive neolandscape, giving physical form to the information collected about the giant landmass and the terrain beneath the seas surrounding it. Melissa has exhibited with: Eastern Bloc, Montreal CA, 319 Scholes, NY, Eyebeam, NY, Issue Project Room, NY, with the Queens Museum, NY, the Electronic Music Foundation, and the International Biennial of Contemporary Art ULA-2010, Venezuela. Her work has been featured by the Creators Project and with the Village Voice, Kickstarter, Art 21, and Columbia University’s State of the Planet. Clarke received her masters from New York University’s Interactive Telecommunications Program, with a two-year Tisch School of the Arts Fellowship.

To find out more and for more information on the soon to be released arctic publications by Melissa F. Clarke go to melissafclarke.com/aboutandcurrent