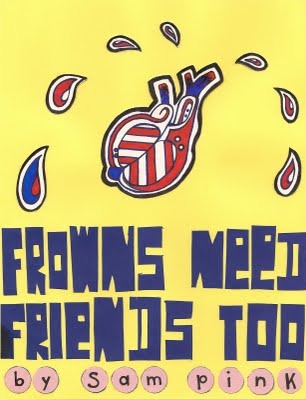 There's no picture of Sam Pink. He didn't send me one, but I forgot to ask until really late. If that missing photo is worth a 1,000 words, then guess how much the 514 words below are worth?

A whole heck of a lot, because Sam Pink is awesome and his new book is called Frowns Need Friends Too out now from Afterbirth Books. It's prose, it's poetry, it's in between.

Sam lives in Chicago. His blog is called “Crown Yourself, Then Kill Yourself”. He also wrote the following all in lowercase and I corrected it because I'm a journalist.

1. The World as Will and Representation by Arthur Schopenhauer

Before this I'd read “essays and aphorisms” and I liked it. It seems like Schopenhauer was a mean asshole. It also seems like he was really insecure. He makes a point of mentioning his own work a lot. A few times in “world as will” he mentions a “prize winning” essay he wrote on morality. Sometimes I imagine reading Schopenhauer and he's sitting at a table outside somewhere in Germany, with a scowl on his face, and then Hegel and his crew walk by and laugh at Schopenhauer. “World as Will and Presentation” is a book I like for a few reasons. First, the style of his writing and reasoning is very clear. Second, the book is really negative. Three, he manages to construct his own view of things pretty much on his own without just reciting a bunch of other peoples' opinions.

2. The Insurgent by Noah Cicero

I read this twice. I've read two other books by Noah: Treatise and Human War. They all have similar tones and subjects but “the insurgent” seems to be the best to me. I like Noah's work because it manages to describe the same kind of interior terror I feel. Noah is fun to chat with online too. It is fun to suddenly say something rude and mean to him and watch him react and then tell him you are just kidding.

3. A piece of construction paper I found on the floor

A few weeks ago I was given an old book of construction paper that had been previously used by a five year old. A lot of times if I know someone who has access to art material I ask to have it. So there was one sheet of orange construction paper that had gotten ripped out and I found it on the floor and the words “kung fu” were written on it in the handwriting of a small child. I remember laughing a lot when I saw it.

When I found out these four volumes existed, it was like seeing a concert lineup that progressively gets better as you read on. These books are Martin Heidegger analyzing Nietzsche's “will to power” based on the concepts of “will to power” “overman” “eternal recurrence of the same events” and “nihilism.” It is a really intense set of books that to me is an amazing example of thinking. There are many times that I just pick the books up and hold them and then set them down.

5. The Drunk Sonnets by Daniel Bailey

I mean, I hate Daniel Bailey, don't get me wrong. I fucking hate him. He has a stupid face and I hate his dumb soul. His entire family tree is a crime. But I like his book. It seems to have my favorite equation of funny+sad+strange = no hope. I don't know, Daniel probably has no future and will die unhappy and alone but at least he did this book.