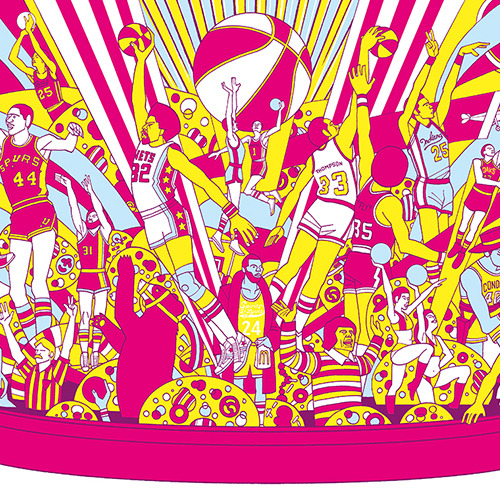 This week sees the arrival of FreeDarko's book, The Undisputed Guide to Basketball History (Bloomsbury USA, 2010) Yes, it corresponds with the opening of the NBA season, one of the most anticipated in recent memory with LBJ scoring digs in South Beach and K-Durant making the plains interesting in OKC.

As an accompaniment to that excitement is FD's book, a story of Connie Hawkins and James Naismith and Larry Johnson and how YouTube has changed the NBA. It's a People's History of the NBA, a history for the things that people actually care about–like beards and brawls and basketball movies.

FreeDarko is a basketball site that's been running strong for a few years now, highlighting the obscure and championing a new tone in sports–one that values stuff like a “positional revolution” and “liberated fandom” where players can exalt their own style and fans are free to support the players they like, not just the teams they're geographically bound to.

Undisputed also has some great artwork by Jacob Weinstein of Charles Barkley as a blimp, Jordan casting a long shadow, of the ABA and the 70s NY Knicks just to name a few.

Nathaniel Friedman (a.k.a. Bethlehem Shoals) is the main purveyor of the FreeDarko site and is also the main author of their new book. It follows The Macrophenomenal Pro Basketball Almanac, a style guide to the game's best players.

Why another book? Did the masses demand it?

Well, I figure any time you're given the opportunity to do a
second book, you do it. The real question is, why history? I know a lot
of die-hard fans would have liked to see a sequel to the Almanac, with chapters on Kevin Durant, Dwyane Wade, Deron Williams,
and other players who didn't make the cut (or weren't quite worthy at
the time). Bloomsbury really felt, though, that not enough time had
passed, and that if we really wanted to prove that FreeDarko was more
than a many-headed freak show, we should do something that required a
little more thought and rigor.

In your research, were there any facts that generally surprised you? Or changed your perception about a player?

The
longer I worked on this book, the more I realized that this was the
whole point of my trying to do a history of basketball. I've got a
background in critical history, and I don't respect authority, or sports
mythology that seems to have had all the color and life washed out of
it. So while it's a stretch to call the Undisputed Guide
a reclamation project, I think that everyone involved wanted to find
new things to say about well-worn, but strangely unfamiliar, subjects.
That's one of the weird things about basketball history: these are
players and teams that most of us understand only as clichés, and yet
there's a certain shallowness there. You don't have to fight that hard,
or dig that deep, to find something vital there.

Compared to some other basketball history books, a lot of Undisputed deals with marketing and endorsements. is there one player in which marketing really changed a player or a player's game? I thought the piece on Lil Penny was interesting.

Yeah,
Dr. L.I.C. did a great job on that one. I don't know if much of the
pre-1980 book has much to say about marketing and endorsement. Image,
maybe, and if you'll allow me to speculate, that might be why basketball
ended up such a natural fit for all-out advertising glitz. But yeah,
it's pretty much impossible to think of Penny Hardaway
without Lil' Penny coming around for the ride. You could argue that he
both overshadowed and enhanced the real Hardaway's career — and legacy.
Have you ever seen Stacy Wall's Lil' Penny book? It's absolutely
brilliant, and is just what it sounds like: a book by Lil' Penny. It's a
close ancestor of the Almanac, even though none of us had read it at the time.

Just read the chapter on YouTube and the sidebar on Twitter. Which player from a previous generation would you have liked to read their Twitter feed?

Wilt (Chamberlain). And not for the reason you're thinking.

I noticed the 70s got their own Hair Champions section. Why not the 00s? Deshawn Stevenson? Anderson Varejao? Joakim Noah?

What made the 70s stand out — in
basketball as in so many things — was that an astoundingly high
percentage of people had really wacky hairdos. All the guys you listed
stand out as freaks. The dudes from the 70s we chose to spotlight are
like boats lifted by a rising tide.