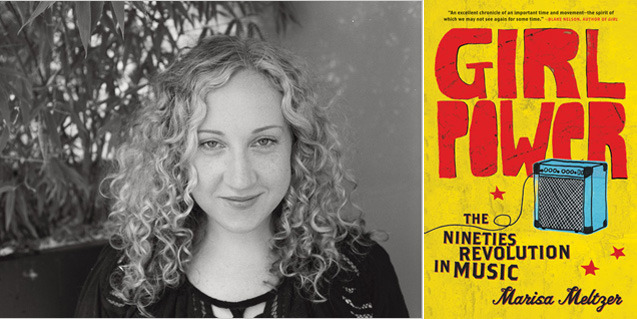 Girl groups in the nineties were, well, diverse. There's everything from riot grrrls to the Spice Girls to girls who love sk8tr bois to the rise of corporately manufactured pop singers. Marisa Meltzer covers all of that in her book, Girl Power: The Nineties Revolution in Music.

Just checked Marisa's Tumblr and she's putting together a zine on Beverly Hills 90210 to come out on 9/02/10. Clever.

Most people would see the riot grrrl movement and something like the Spice Girls at odds with one another, but you bring them together. How are they part of the same movement even though they sound and started from such different points?

The messages of both are, on some level, about uplifting girls, celebrating girlhood, reminding young women that they're powerful. It's kind of like how, when it was revealed that Le Tigre was collaborating with Christina Aguilera, Johanna Fateman said that they “found a ton of common ground in our aim to make upbeat danceable tracks celebrating female friendship, strength, and of course, PARTYING.” I would never call the Spice Girls feminist. And there's no argument that the Spice Girls and riot grrrl come from different places–politically and musically–but I don't find them at odds with each other.

There's an interesting quote from a Spice Girls fan in your book, saying about the Spice Girls that “It wasn't women power, and it wasn't female power, it was girl power.” Does the idea of it just being 'girl power' or 'riot grrrl' delimit the power adult females have once they've grown up? Is that power just for girls?

I am 32 and I still think of myself as a girl. It's less about age than about the cultural construct of being a girl and what that entails. When I think of “female,” I think of it as just being Not a Boy. When I think of “women,” I think of being a responsible adult who probably owns several pantsuits. But when I think of “girl,” I think of malls and sleepovers and gossip and pop music. Calling something girly was almost pejorative because it was about frivolity. The Spices and the riot grrrl bands were saying that you didn't have to reject one side of yourself in order to be angry or in order to be taken seriously. In that sense, it's not age-specific.

There's quite a bit in the book about the emergence of young pop artists, like Hillary Duff or Miley Cyrus and you note that Miley is not trying to be 'bad' or 'good' but to wear both tags. Does wearing both tags hurt their “brand” since both were corporately manufactured? Do male pop stars have the same leeway?

I think male pop stars probably have a lot more leeway because their fame is so much less about their goodness and chastity. I like the ways that Miley is experimenting with badness, but it's a bit tepid for my taste. A lesbian kiss or a flashed bra strap is nothing–I would like to see her reading Judith Butler, praising the Daria box set, and talking about health care. But I'm a realist. I'll take the bra strap if that's all I can get.

Since the book is still pretty new, I like to think the categories are valid. But five years from now, I'm curious how the musical landscape will look: Taylor Swift in her mid-twenties, Miley post-Hannah Montana, the return of Lilith Fair… I feel like I could probably write a whole chapter on gender and stardom in the tweets from Bethany from Best Coast.

Also, what do you think of girl-fronted groups that may not be all-female, a rock group like Paramore or Lemuria? How are groups like that changing the girl power dynamic?

I like to think that any band that's not making stereotypically feminine music with a girl singer is a positive thing. That said, I've never been overly fond of bands with just a girl singer. It's not like I can't enjoy them, because I can, but I find myself disappointed. I realize that's my problem to reconcile, but I do want there to be more all-girl bands so that the all-girl band will stop being a curiosity.

PrevPreviousLit Randomness: Jose Saramago dead but not his blog, linking handcuffs and Paris Hilton
NextLit Randomness: Where does Harper Lee put all her money?Next