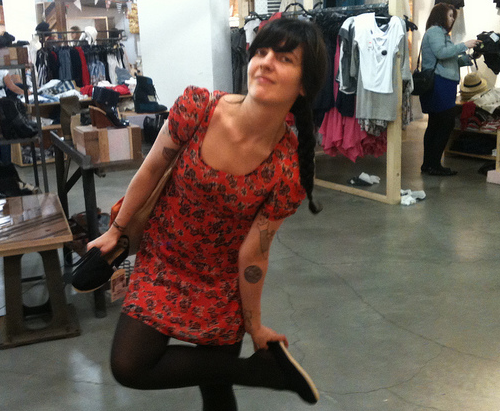 The person who wrote this book is Megan Boyle. Megan is a writer living in Baltimore (I guess…) and is married to the writer Tao Lin. Panda Express comes out next month from Muumuu House. Megan and Tao also have made a few films under the imprint of MDMA Films. Here are some suggestions about what to read from Megan.

In this semi-revealing interview, Megan answers talks about Christian Bale, chicken nuggets, pork rinds, and why Chicago is like Disneyland.

If you were going to watch 'several' Christian Bale movies, which ones would you watch?

I'd like to re-watch “American Psycho, “Metroland,” “Howl's Moving Castle,” all the Batmans. I'm looking on imdb.com now, I haven't seen a lot of his movies. really I'd like to watch any of them. I like watching movies even if I don't end up liking the movie.

Do you eat chicken nuggets like the character? If so, is this a regular/semi-regular/not very regular occurrence?

I do. Nuggets are okay but I prefer tenders. There's something satisfying about dipping whatever I'm eating in sauce multiple times. When I eat a chicken tender on some level I'm probably thinking 'damn, eating is usually just chewing and tasting, now it's about customizing these bites with sauce and getting to watch this thing disappear.' Think I eat a chicken nugget/tender-like product once every 1.5 months.

How true are these journal entries? Kind of true? Not really true? Some true? A percentage of true?

There is no end punctuation to your last stanza sentences, what is the reason for the open-endedness?

Originally I used end punctuation, but decided it looked messy and couldn't think of a reason not to delete it. A line break seems bolder and more deliberate than punctuation because it takes up more physical space and time. At the same time, when I'm reading something with a lot of line breaks I sense myself processing information faster and exerting less effort on concentrating. I like when that happens, I wanted my book to read fast. It probably only takes a fraction of a second to see a comma/period and think 'why did the line before this end differently, why is this a comma instead of a period, what does she want me to think,' but considering how many lines are in the book, I probably saved readers 7-15 seconds.

Were any of the lies in the 'lies that I told' actually lies? Did you lie about lying? Or were they all lies? Don't know if it's fiction.

'I don't want to have kids' is sort of not a lie, I don't have conclusive thoughts about kids. I lied about my weight. I would tell you my weight right now but I don't want to lie to you again. Every other lie is true.

Is Baltimore better than Chicago?

Baltimore feels like a dollar store that's been medicated so heavily it's no longer aware of wanting to kill everyone who walks into it. I mean that in a good way. Out of any city I've lived in, I think it has the highest concentration and widest variety of things I want to photograph/remember. I feel really visually stimulated here. Chicago feels like the first draft of Disneyland which was built in New England and abandoned before it knew it wasn't Disneyland, heard Disneyland was in California and started drifting across America to 'find itself,' then somewhere in the midwest it realized it was Chicago and stopped moving. I like how extreme the seasons are in Chicago. The lake is also cool. I've felt probably every emotion I'm capable of feeling and eaten a lot of good food in both cities.

Is Sprite still a successful soda? Seems like it may have peaked.

I can't imagine Sprite ever leaving the 'big 3' of sodas (coke/'cola,' dr. pepper/'cola-like,' sprite/'surprisingly not water'). they may have peaked with the 'obey your thirst' campaign, I remember seeing basketball players in those ads.

I don't think I've ever fully understood what 'life to the fullest' is supposed to mean. What could life be full of other than itself? Does it have degrees of fullness/emptiness? How can it be empty? Life is just this thing I've never not been doing. I wish there were more words for life, or maybe just a word with the definition 'the only thing you're always doing if you're not dead.' When people say life can be full or empty it sounds like they're talking about an object with measurable qualities, which makes life seem less like an experience and more like a thing to witness. I'm almost always aware of some part of myself observing some other part, but life in general feels experiential to me.

I'm not as concerned with avoiding feeling bad now as I was in the book. Ideally I don't want to avoid any feeling, I just want to feel it and let it go away. I'd like to time travel to myself in 2009 so I could ask her 'why do you want approval so much, what would happen if everyone liked you, how would your life be different if you could control all your feelings, what if you never felt bad again, what if you were perfect one day, what would happen next?' And maybe beat her up a little because neither of us have ever been in a fight.

An MDMA Films question: any plans to make a 'scripted' movie? Most of the MDMA movies seem unscripted from what I can tell.

They've all been unscripted, yeah. I'm open to making a scripted movie someday, probably not for a few years.

Thoughts you can respond to:

Seems like '9.10.09' is a turning point in the novel, like the character gains some more control of life after this point, though still somewhat confused.

I'd like my epitaph to say 'gained some control of her life, though was still somewhat confused'…hehe…

Before that entry I was eating poorly and drinking and vomiting from drinking a lot. I liked doing that because I wanted to avoid feeling depressed and didn't deeply believe any self-inflicted action could have consequences beyond my control. Having an ulcer made me want to pay more attention to what I put in my body, which gradually caused me to feel calmer and healthier and more secure/'in control.' I don't remember what else was going on the day I wrote the entry or how long it had been since I had come back from the hospital, but I'm pretty sure I wouldn't have been feeling good enough to realistically consider a future where I felt better, so I think anything 'turning point'-like about the entry is accidental.

Semi-interested in hearing more about the roommate who ate pork rinds and dipped them in hummus.

She was funny. She went to church most Sundays and had a framed picture of Brandi. Student housing randomly selected us to be roommates in a one-bedroom loft apartment. There wasn't much privacy. She ate a lot of 'crunchy snacks' in 'crinkly bags.' This was when I discovered I really like the sound of people eating crunchy snacks or handling crinkly bags. I would hear her getting a bag and I'd lay on my bed and pretend to be napping so I could listen to the crinkly/crunchy sounds and feel relaxed and get goosebumps. I think the hummus combo either happened a few barely memorable times, or so many times I don't have distinct memories of it. She was the first person I knew who ate pork rinds regularly and bought giant bags of them

The number of cat references seemed to be more prevalent in the 1st half of the book than the 2nd, wondering if something happened to the cat.

I got the cats around the time I started the book, think I just felt less excited about them over time.