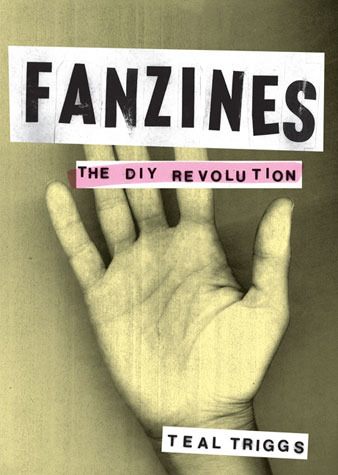 Got that difficult crust punk on your Christmas list and not sure what to get? What about that bro carrying around the Slingshot organizer and camping out at hostels? Or the friend that sent you a collage card of Glen Beck riding a boar with Xs over his eyes and darts in his body?

Tell them Merry Christmas by handing over Fanzines: The DIY Revolution by Teal Triggs (Chronicle Books, 2010). Nothing short of amazing, it details essentially the whole history of fanzines in America and in Britain, complete with tons of cover shots, interviews and analysis of the eras and themes.

Like any good zine fan, this makes you cautious–how can something so underground be stuck together in one book? I was never knee deep all the way in with zines, but I've picked up a copy of Duplex Planet here and there, and was a subscriber to Punk Planet. That makes me no expert, but at least I've read the titles of a few zines. From my very untrained eye, this is authentic–by their design, aesthetic and content, it at least feels like Triggs got them all.

Fanzines is an incredible coffee table book for those wary of coffee tables, an illuminating example of art from those that don't know what they're doing. A real treasure to the underground spirit. All the energy of the movement is there, no matter what inadvertent omissions.

Triggs, a professor of graphic design at the University of the Arts London, was kind enough to answer a few questions:

Where did you have access to so many different zines? Are
these from your personal collection?

The zines which are featured in the book have come from a number of
different sources including: fanzine collections in University libraries or
other fanzine collectors and many courtesy of the zine producers themselves.
However, the bulk of zines are drawn from my own personal collection –
which I began more than twenty years ago.

You mention that zines started from sci-fi fanzines, but then the music
zines kind of take it over. Are there still fanzines in the same format or have
they morphed in a different way than the music zines?

Fanzines have emerged, in part, with their roots in science-fiction and
comic fandom. The early zines were produced using the technology available at
the time – e.g. stencil duplicators or mimeograph machines. This gave the zines
a tactility and unique quality, but also a way of distributing in multiples to
other like-minded fans. To explain simplistically, early music zines such as
Crawdaddy (US) or Bam Balam (UK) responded to a set of different printing
process and viable production techniques with photocopying or Litho
printing and, where the format of standard paper sizes were normally a
determining factor. Later, zines producers began experimenting with different
sizes and formats (e.g. using old 45 vinyl as a backing for the zine) to
reflect the content or process of making their zine.

With most of the zines
in this decade, how has the process changed? Is it still cut & paste, or
have they adapted to computer programs, etc. for developing their work? If so,
does this lose the “zine-ness” but still maintain a DIY spirit?

You will always have a range of different kinds of production
techniques being used as individual zine producers have their own way of
wanting to express their intentions visually. It is also what zinesters have
access to and what they do with those materials – whether it is the creation of
a digital platform or as a handmade and photocopied. Desk-top-publishing in the
1980s made an impact visually as zinesters were able to produce their work from
the computer which gave a more 'professional' feel to the typography and image
reproductions. And, with the rise of the Internet, we see the development of
electronic fanzines (e-zines).

However, the handmade zine is still prevalent and you will often see
these produced alongside a web version and/or where a website is being used for
distributing the zine. More recently with a general return to notions of
craft production and DIY-ness, we are seeing more zines produced using
letterpress and silkscreening techniques. This slows down the notion of
immediacy the cut-n-paste technique fostered by early punk fanzines, for
instance. Nevertheless, the zineness of an individual wanting to say something
to like minded individuals and the spirit in which this is told, is still very
much alive.

What is your favorite zine? And possibly related…what is the one that you
were most fascinated by?

Determining a favorite zine is really difficult as they all have such
individual visual characteristics and authorial intentions. If I had to choose,
I would say that UK-based Fever Zine by Alex Zamora (designed by Simon
Whybray), is a fairly recent publication about music, art, fashion and popular
culture which is print-based but also employs aspects of social networking to
very good effect. www.feverzine.co.uk/

In contrast, the one that still fascinates me is the punk zine
“Ripped-n-Torn” produced by Tony Drayton from 1976-1979, which
covered the scene in London and Glasgow. Partly, I think what Tony offered in
terms of a broader perspective on punk music and culture during the time is
still interesting and relevant today, but also in how he captured this DIY
spirit visually through the design of the zines. Tony is one of the unsung
heros of the zine community.

How do you see zines persisting in the next few years? Have they
gone beyond music to new topics?

There are as many zine topics as there are zinesters. Music zines do
form a large proportion of this self-publishing phenomenon, but the variety of
topics has certainly become more visible since the 1980s (thrift shopping, beer
drinking, cycling to environmental issues, cooking, football, etc). Today, we
are seeing an increase in personal zines (perzines) being distributed which
focus on the issues, challenges as well as a celebration of an individual's
everyday life. I think this is one of the wonderful things about
self-publishing and one of the reasons why DIY and zines are here to stay.