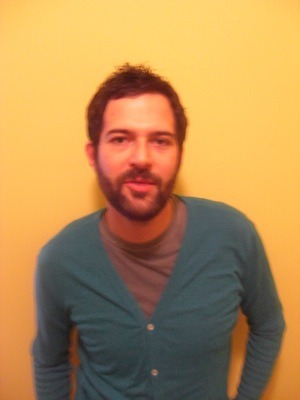 The story behind Light Boxes by Shane Jones is just as compelling as the one contained in the semi-new book. Jones wrote Light Boxes while working at a bookstore in Albany, NY. The book was picked up by the small press, Publishing Genius and 500 copies were printed in 2009.

Somehow, some way big-time movie director Spike Jonze got a hold of it and optioned it for a movie. That hasn't quite come together yet, but it thrust Jones onto the national publishing scene and Light Boxes was re-released this spring by Penguin Books.

In Light Boxes, February torments a town with dismal weather all year long and the town fights back to get some light. Jones answers a few questions and talks below about the structure of the book, Spike Jonze, working with a small press and Guns N' Roses.

Why did you choose February as the antagonist? Is it because of Valentine's Day? Why not hate on January or November?

Shane Jones: I just think in the northeast February is all gray and cold and just a miserable month. I get down in February. It's the tail end of winter and you just want some sun. Valentine's Day is kind of nice. I've got some hate for January too, but it's the New Year and feels kind of special. November is Guns N' Roses.

Is February God (or god?) Or is that term not really appropriate for this character?

February is a month, a season, a creator, and a God. He's a lot of things. He's Axel Rose on a bender. I wonder how many Guns N' Roses references I can make in this interview.

I was interested in your formatting choices. Why did you choose to alter the points of view, alternating between several different characters? And how do the choices in fonts & font sizes help tell the story?

I decided to alter the points of view because I didn't know what I was doing. I also got bored easily while writing it and would just switch it up, go to a different character or scene to keep myself interested. I liked the effect of this too – kind of dreamy and a “everyone around the campfire taking turns talking” kind of thing. The font choice was Adam Robinson at PGP after he listend to Use Your Illusion Volume II by Guns N' Roses. The font sizes was something I did to show things like characters whispering which I hope adds another dimension to some of the dialog.

Some dudes are selling the Publishing Genius version of Light Boxes on Amazon for $125, $350, & $400. Are those your copies? What do you think when you see those prices for the PG copy? Is it worth it?

They are not my copies. I have no idea who those people are, but I imagine they'll probably be pretty bummed when they don't sell. A few copies I think have sold for $100. When I see those prices I kind of laugh. I was doing readings and trying to sell those copies before for like five bucks. I guess if someone is a real die-hard collector of rare out of print indie books, then it's worth it?

What's the reaction been to your relative success from the indie lit community that you came from? Do you think it'll cast light on some other good works?

I can't really judge the reaction. I've gotten emails from people that are really excited about the book, and I think most of my friends are happy for me. There were a few blog posts from the indie lit community about the book and the circumstances surrounding it, but really, I don't think that many people care. I imagine most people in the community read about the book and just thought “Great, good for that guy,” and then went and ate a cheeseburger. Books get optioned all the time. It's not like Guns N' Roses being some unknown band and then signing to a major record. Most people in the indie lit community are writers themselves and want to concentrate on their own writing, right? Maybe it does show that people in Hollywood and major publishing houses are interested and reading indie lit. I certainly hope that other books published by small presses get more attention.

Will you be doing any writing on the screenplay for Light Boxes or is that still under discussion? Has any timeline been established for its production?

The timeline is that the movie is a dead deal right now. There hasn't been any development at all. I've been told that the option will not be renewed, but they may revisit it in a year or two. It's probably more of a question for Spike Jonze or Ray Tintori, because I'm not sure exactly what happened, just that as of right now, no movie. So hey, Tim Burton, if you're reading this, it's all yours!