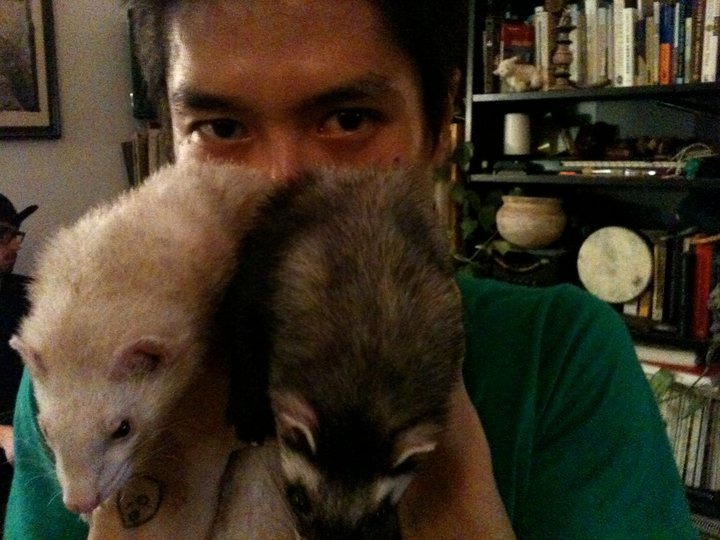 He once plastered Gawker's door with Britney Spears stickers, only to show up there last week with an amusing tale of being arrested for trespassing at NYU's bookstore. His minimalist style and liberal use of quotation marks has produced imitators and the righteous-writer scorn of others (see comments after the aforementioned Gawker piece). He's the author of a few books, plus a few other ebooks, and he also contributed to a “photoshop thriller” that I highly recommend. He is Tao Lin.

Richard Yates is named after the author of books like Revolutionary Road and The Easter Parade. Though Tao's book itself does not involve Richard Yates (one or two mentions) it instead takes on Yates' simple, refined style and similar themes–love, family, confusion while adding its own nebulous layer of celebrity intrigue.

The following questions are inspired by Tao's own blog (guess that makes me complicit in his publicity schemes) and includes a few deleted scenes from Richard Yates.

By what writer do you feel interested in reading an essay about marshmallows?

Maybe Bret Easton Ellis or Jean Rhys or Kafka or Brandon Scott Gorrell or Ellen Kennedy or Megan Boyle or Noah Cicero or Zachary German because I feel unsure what they would write, it seems like they would normally not write about marshmallows, and I feel consistently interested in the tone/thoughts/”prose style” of each of those writers regardless of focus.

If you had to be a dog that lived forever or a person who had to eat ten giant carrots a day which would you rather be and why?

I thought “seems 'horrible'” 3-6 seconds then “realized” something like “carrots are healthy, it would be good to be forced to eat them, probably I could eat them in 40 minutes while listening to a podcast or walking somewhere or something” and felt I would rather be the person. I would probably feel better and live longer. If I were the dog I might be someone's pet and not be able to do certain things.

What are some things that were deleted from Richard Yates?

Dakota Fanning sent [an email to Haley Joel Osment] that talked about a band from Canada. “Even though I had never listened to Propagandhi before I met you I’ve always remembered when you posted the lyrics ‘I’ll call you on your shit / please call me on mine / then we can grow together and make this shit-hole planet better in time.’ That was one of the things I think that made me first feel really attracted to you because I can’t stand it when people can’t face what’s wrong with themselves and can’t appreciate when other people are being honest and I don’t think I’ve ever met anyone before you who really felt that way.”

“I met your wonderful daughter today and had dinner with her and Haley,” said [an email from Ana to Dakota Fanning's mother]. “Haley mentioned rather sadly that you had some worries about his spending time with her. It occurred to me that if I were you and I had read Haley’s blog, I might be concerned, frankly. I just wanted to let you know that—as I am sure you will experience yourself if you haven’t already—Haley is a perfectly good person, extremely sweet, very shy, a good listener, and really an excellent writer with a good future.”

What are some memorable moments you had while editing Richard Yates?

I don't have 5 favorite writers, I think. Here are 5 writers I like and feel interested in reading biographies of, with which dead writers I would like to write those biographies in parentheses: Frederick Barthelme (Kafka), Joy Williams (Richard Yates), Brandon Scott Gorrell (Jean Rhys), Ellen Kennedy (Fernando Pessoa), Noah Cicero (Kobo Abe).

Did you consider any other young movie star names for your main characters, and if so what names?

I don't think I did. Something like Zooey Deschanel and Joseph Gordon-Levitt might be funny but in a different manner. Or maybe, like, Brad Pitt and the main character of The Craft.