3-second interviews with 3 bands at Way Out West 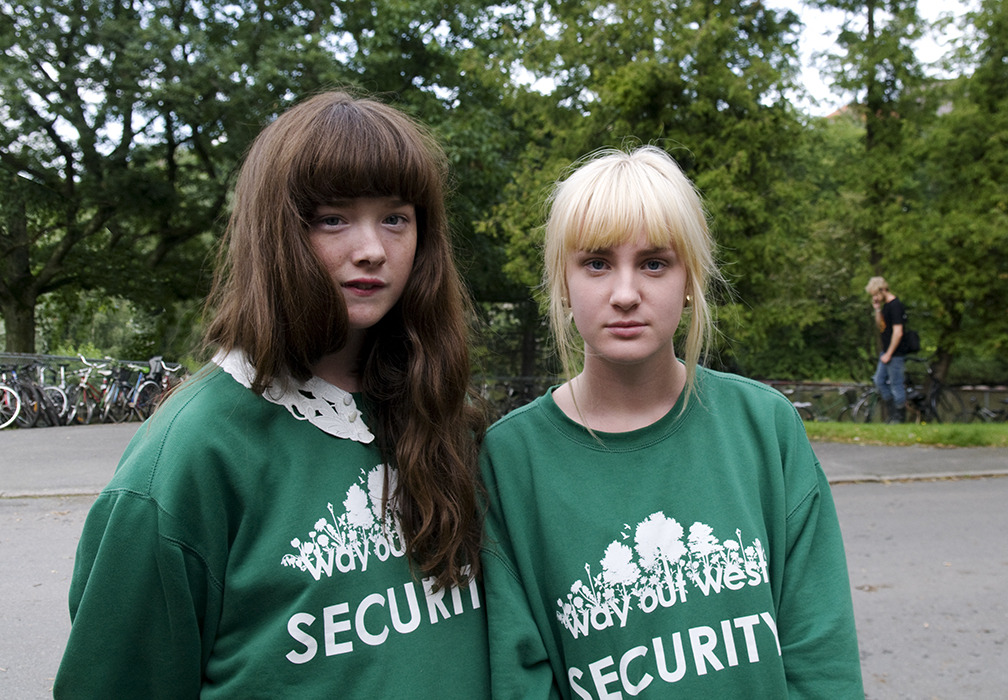 While the Way Out West festival allegedly celebrated the artistic community of Sweden, most of the music on the roster was American, so I spent about three seconds with three bands from America, sort of.

Me: I heard you play a great Hey Liza tune during sound check. That was awesome.

Ben: [Laughs] You heard that?! Yeah… We have an alter ego band that – oh. I’m not supposed to say that. I’ve already said too much.

Me: What’s it called?

Ben: See, I can't say. But it’s a little rowdier [than Low Anthem].

Me: Your stuff is super mellow. I was surprised a festival like this put you on at midnight.

Ben: Because we aren't loud? I don’t know, last night we played around midnight but the crowd was awesome.

Me: They didn't fall asleep?

Ben: No. I fell asleep at my favorite show I’ve seen. Leonard Cohen, but it was a three-hour long set so I only missed one song.

Me: Sure. Are these Swedish?

Joseph: Yeah, someone got them for me. Or these. [He produces a smaller box of more cough drops.] These will knock your socks off.

Matt: I want one.

Me: Try both at the same time.

Me: They really are chewy.

Joseph: Well you aren’t supposed to bite into them…

Me: First time in Scandinavia?

Me: Have you been collecting any tschotskes?

Matt: I want some candy.

Joseph: I want a sweater.

Me: How does it compare to other European countries you’ve toured?

Joseph: Well, hopefully the show will be better than Amsterdam. The airline dropped Bryan’s keyboard. He usually plays with two. Now? One.

Matt: The whole day started off so chill. We sat at some coffee houses…

Joseph: Then I broke the van. There was also Liverpool. That was the worst.

Joseph: It was about twenty tough dudes with their arms crossed, yelling at us to play Oasis. They beanbagged us. They took beanbags from the back and pelted us.

Me: You were too emotional. Has anyone ever cried at your shows?

Matt: From it being too loud!

Me: You must get compared to Bright Eyes a lot.

Me: No. I mean do you get compared to Bright Eyes?

Axel and Rikard of Graveyard

Me: This is a Swedish festival but there are a lot of American bands playing. How do you feel about that? Shouldn't there be more Swedish bands?

Axel: The festival is kinda weird on its own, 'cause most of the organizers are from Stockholm.

Rikard: Festival season I don’t mind too much. I’m excited to see Iggy even though he’s a dinosaur.

Me: Y’all are more hard rock than metal, but the name Graveyard is pretty dark… Does the music meet up with the name?

Rikard: We always wanted dark lyrics and dark material, but without being metal because Gothenberg does have a metal scene… Black Sabbath is a dark name but they aren’t metal.

Me: You don't think Sabbath is a metal band?

Rikard: When the blues starts to emerge from the metal, then it starts to become a genre of its own.

Axel: Sabbath’s been around so long that they have transformed into metal, but the songs that you know and love are hard rock. If you ask someone around volume four, I don’t think it would be metal at all. Scorpions, too, is not metal to me. If you can groove to it, it’s not metal, but if your fist is up in the air and it becomes more millitaric [sic], then it’s metal.

Me: Here, you are a pretty big band, but America, you are still an underground band.

Rikard: I quite like being underground. To me that's a good thing. I don't like going around and having people stare at you.

Me: What’s the tattoo that is on your arm?

Rikard: This is a shrimp with my face on it and a crab claw holding a drum stick. There is a tattoo artist around here who is campaigning to get year of the shrimp into the Swedish calendar. At first he would tattoo shrimp on people for trade – like if they brought him half a pound of shrimp, but he got tired of shrimp, so he accepts gifts.

Me: Do you have a shrimp?

Rikard: No. I have an unfinished tattoo – “R.A”

Me: What’s the rest of it supposed to be?

Rikard: It’s an unfinished tattoo. A friend wanted to tattoo the number 5 onto my eye, but didn’t want to destroy my face…

Me: Yeah, face tattoos in America, like teardrops, are usually reserved for people who’ve killed someone but either way, if you have one, it mean you’ll get some shit done.

[They all speak Swedish]

Rikard: Do you need any speed or hash while you are here?