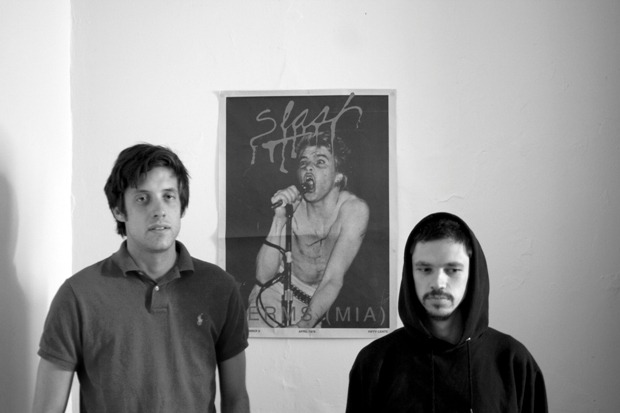 Last week Sacred Bones announced its latest signee Prolife, an industrial offshoot of Melbourne punks Slug Guts. Comprised of James Dalgliesh and Nicholas Kuceli, Prolife was formed after the disollution of Slug Guts, who broke up after touring heavily off Playin' In Time With The Dead Beat.

Back in Melbourne, in a flat on Lygon St., James and Nicholas amassed effects pedals and toy keyboards to explore their shared interest in the no wave, artsy industrial sound of bands like Chrome, Suicide, and Cabaret Voltaire. The first single “Overheated”, off an upcoming 7″, creeps through systemic murk and the hallucinogenic effects of 3 a.m. insomnia. The terror of “Overheated” is in the echoing synths that would give chills to Carpenter and Howarth. With so much intrigue based around the first single, we sent five questions to Prolife in order to get a better feel for the duo's intent and greater plans for a full length later this year. Listen to “Overheated” below and read on for our interview with James.

Your bio says you simply decided to buy some pedals and make noisy night time music, but there must be more to the story. Was there a shared affinity for a particular band or label that specializes in industrial/electronic that got the two of you discussing a side project? Or were you in need of a change after touring heavily as Slug Guts and this was a way to challenge yourselves?

Well, we've always been stoked on electronic pioneers like the obvious: Suicide, TG, Cabaret Voltaire, Chrome, Primitive Calculators for years, people who've never cared about failing live or seem to enjoy it. Just people who'll go down in flames in their art for their sound. In recent years in Melbourne it's been Chrome Dome, Nun, Repairs and Jonny Telafone who've really inspired us to want to even get out of bed in the morning when faced with such a daily onslaught of stuff that generally misses the point.

In the beginning for Nick and me — maybe eight years ago — it was definitely Naked on the Vague, and Oh Belgium who really understood what was going on in terms of electronic shit and art to escape the boredom, and depression of living in Australia in the early 2000s, and after five years of being in Slug Guts it just felt natural to want to do something along these lines.

Did any of the first tracks you made make it onto the single or the upcoming album? And if so, are they essentially in their original state or did they evolve as you started to hone in on defining Prolife?

We ditched a lot of the first songs we came up with due to the fact our good friend Shaun passed away last year and we couldn't bear to reappropriate a lot of the stuff we were doing without feeling super bummed. “Overheated” and “Gold Leaves” got mixed a lot last year until they were close to perfect to our ears, but even they changed a lot from initial recording to final mix. They won't be on the LP though.

Did those initial shows around Melbourne alter the sound at all? Was there any discoveries made in performing it live?

Yes, definitely. We started with a bass guitar and an electro-harmonix freeze pedal for the initial shows but quickly got sick of trying to do the songs the same so we just ditched the bass and got a Casio SK-1 and put it through a frost wave filter and reverb to make it a little harsher, that was okay for a couple of shows but then I borrowed Tam's Yamaha CS-1 a few months ago and have failed to give it back. It's a really underrated synth in my opinion. Andrea from Vacuum has one and so does Sarah from Night Terrors and they use it a lot better than we do.

Is the 7″ a good sample of what to expect from the full length? What can you tell us about the record?

The 7″ is possibly not a good sample of what to expect since we are thinking we want to do a less song based LP. I don't want to ruin the surprise but I will anyway: we are going to do a rambling soundscape mess of an LP hopefully in the vain of Chrome, Suicide, Nervous Gender, but we're simply not as good as those guys. We want to make music for drug addicts and psychics with no fashion or political message. In short I want to make something that truly separates us from everyone else. I want to be able to put it on at a party and no one notices. We will also be calling on the help of our German exchange student Sherman. He has been listening to DAF nonstop and is ready to blaze some serious frequencies.

Any plans to use Prolife as a vehicle to remix other artists?

We just did a remix of a Miles Brown song. Miles is a world renowned theremin player and is getting a bunch of people to remix songs off his new album on IT Records. I'm pretty sure the Metronomes, Justin Fuller, Asps, Matthew Brown and a few others are doing it… can't wait to hear what everyone does to the songs since we had a lot of fun chopping up Miles and in general bastardising what was already a very perfect product.

Prolife's Overheated b/w Golden Leaves 7″ is out February 4 on Sacred Bones. A full length LP will follow later in 2014.