"Have Fun, One Day You're Gonna Die" – An Interview with Vurro 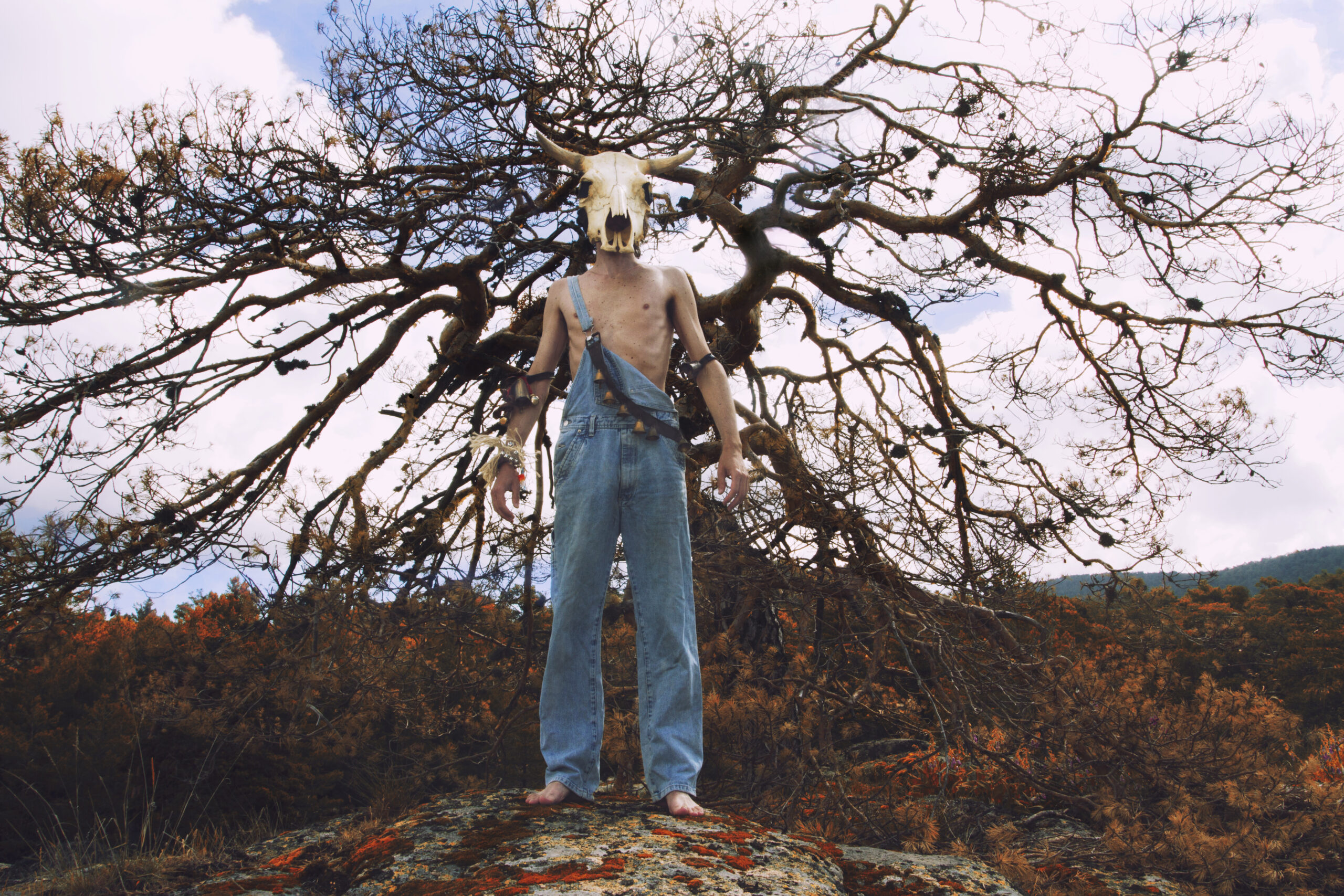 Sometime in Fall of 2017, a video surfaced on my timeline of a man, shirtless in overalls and wearing a bull skull for a helmet, performing a one-man band boogie. Frantically playing multiple keyboards at once, the camera pans down to his bare feet operating organ pedals and a drum kick-snare rig, that musicianship interrupted only by the man in question occasionally banging his head against cymbals with the horns of his DIY, macabre headpiece. The video ends with the man violently rocking back and forth between two cymbals, shaking his organ, and settling to rest, masked and staring at the camera in a manner that is equal parts awkward and unnerving.
The individual in that video is VURRO, a Castilla y León based multi-instrumentalist who, based on the success of that video and others was able to launch an international tour last year and achieve some variety of an internet cult following. As an artist VURRO relies upon performative elements that are as esoteric as they are stupefying – there’s no time to process the ridiculousness of an artist hitting cymbals with his head when his marksmanship and ability on the piano is ostensibly incredible. Not to mention the anonymous quality of the performance (and VURRO’s reluctance to provide his real name for this interview) adds an additional layer of mystery and intrigue to watching him play.
https://www.facebook.com/VURRO.oficial/videos/1799875033590493/

When VURRO responded to my email agreeing to be interviewed, I expected most of that mystery to stay, or if anything to be further entrenched in whatever external persona he would present to me as an outside purveyor. Instead what I found was an honest individual, one who was willing to acknowledge the ridiculousness of the project while breaking it down in a way the seemed comfortable and obvious – for example, he describes his skull as “very practical for protecting [his] head.” Over Skype, we dove into the genesis of VURRO as a character, the process of recording his first album in the mountains of Avila, and death consciousness.

How did VURRO get started as a project?

VURRO: Well the project started last year, a year and a half I think. It started with “boogie-woogie” improvisation in a video on Facebook [that] I made just for fun, just for my friends, but it went viral quickly. So I just started recording after – it’s been crazy. People started to write me via Facebook, I started performing live for the first time.

Your videos feature you performing multiple instruments at once, mainly two keyboards or organs in addition to percussion. How did you develop that technique?

VURRO: I really did it just for fun, really, while I was playing at home. I live in the mountains, I had a lot of time in the winter, there’s a lot of snow. I started playing that way, with the drums, the piano, making songs alone in my home. It’s also because I love “boogie-woogie” stuff, which as a lot of rock and roll dual piano. It’s the music I heard when I was young, that’s been inside me for a while. When I was ten I heard Jerry Lee Lewis, a lot of 50s music, all kinds of blues, Muddy Waters, y’know. New Orleans pianists, organists like Jimmy Smith. I like a lot of psychedelic rock stuff, so my music is kind of a mix of those styles with Spanish, flamenco styles – I sometimes transform guitar or banjo lines over to the piano when I play.

Do you ever wish that you performed with other individuals? I say this because It must be really physically taxing to perform all the instruments at once, especially in a live venue.

VURRO: [laughs] Well, all my life I’ve played with bands, with friends mainly. I like playing with other people – I love it – but this project is different. It’s like a character almost, it’s not me. The character is like this lonely person living in the mountains, playing music by himself.

If VURRO is a character, how does the bull skull factor into this persona?

VURRO: I found the skull in the forest and I had it for like, one or two years. When I started playing drums and the piano and needed some cymbals, I saw the skull and just decided to use it for that. The skull is a symbol of death consciousness, and a part of the character too. It’s like, have fun, but one day you’re gonna die [laughs].