Here's the lucky human that won our Best Music Contest Ever 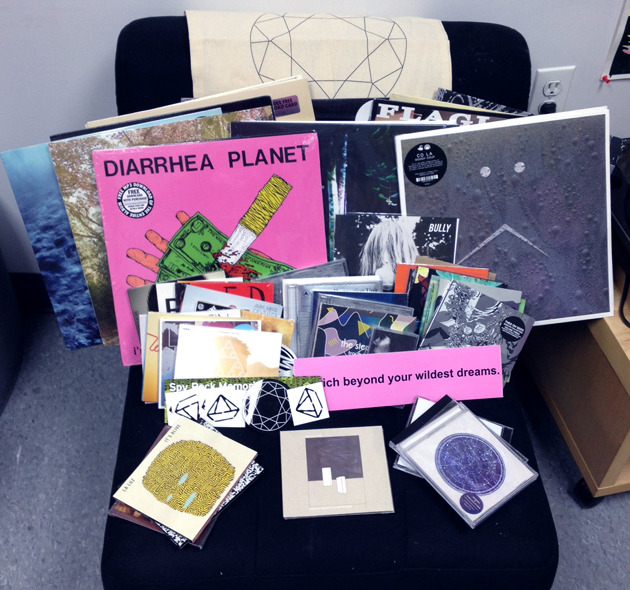 UPDATE: It's over folks, we have a winner! Hailing from the great city of St. Pete, Elise Anderson is the lucky recipient of the big sack of music we'll be mailing out shortly. Which is awesome, and not just because it gives us an excuse to come up with Florida Woman headlines. Congrats Elise, and thanks to everyone who entered!

That's right, our little baby is five. Perhaps you remember the Best Music Contest Ever Part I, Part II, Part III and Part IV when we took on the stupidly huge project of gathering up records from each of the artists and bands we decided were the “greatest”, only to give them all away to one lucky asshole. Last year, some girl in Brooklyn got two canvas totes full of roughly 100 records, CDs, books and tapes. The year before it was some gril from Pittsburgh, a guy in Los Angeles the year before that, and the year before that someone in Staten Island.This year it could be you! From our extensive Best Of 2013 lists, we'll be giving away somewhere in the ballpark of 100 releases. To one person. Will it be you? Probably not, but you should still enter.

So what do you have to do to?

Simple, just like us on Facebook, follow us on Twitter or Instagram. If you're already doing all three, then we love you. But you can also enter by simply retweeting this (https://twitter.com/IMPOSE/status/420214460339736578) or sharing this photo (http://instagram.com/p/i1R4IUvYuS/). Make sure to include ‪@impose so we'll see it and put your name in one of those bingo cages.*‬

‪* We will accept all Facebook, Twitter and Instagram submitions between January 06-February 07, 2013. The contest will run until 11:59pm on Saturday, February 08, 2013. One winner will be randomly chosen by 12pm noon on Sunday, February 09, 2013 and announced on this page by Monday, February 10.‬

That's all you have to do.

Confirmed artists (so far) in the giveaway, with album and format if known:

Lists of swag you can win:

PrevPreviousLifelong Brotherhood: an interview with Young Fathers
NextWin tickets to see Diarrhea Planet and Those DarlinsNext